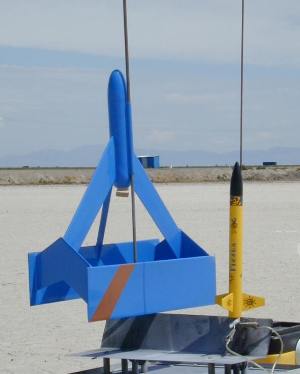 I previously built the Flying Jenny per the MRN plans from JimZ website and enjoyed flying this particular glider so much I thought it might be a fun project to upscale. I happened to have an extra BB style Estes nose cone and figured that a BT-60 airframe would be just right for a 2X upscale.

I printed out the plans from the site and re-calculated all of the dimensions of the wings, struts, and rudders. I ended up with wing dimensions of 4"x17". I was a bit worried about the weight of basswood for wings of this size but also figured that balsa would be too weak to support the larger spans. I spent a lot of time sanding a good airfoil into the two wings and forward wing struts, and smoothing the leading edges of the bottom brace and rudders.

Following the instructions for the 1x version makes for simple construction of the glider. Take your time aligning the wings and rudders, good alignment will result in a good glide. I used wood glue to fix all of the joints and followed up with light fillets of 30-minute epoxy. There are a lot of joints to fillet so this stage of the construction goes fairly slowly, but is worth the time spent.

Construction of the airframe is fairly simple but I added an additional step for looks that I thought turned out nicely. I first cut the tapered end of the PNC60 nose cone from the rest of the cone about halfway down the shoulder. I glued the nose cone to the front of the airframe using plastic cement and then used the rear section of the nose cone to fashion a tail cone. I then located and glued the motor mount into the airframe with enough tube extending to meet flush with the tail cone opening. 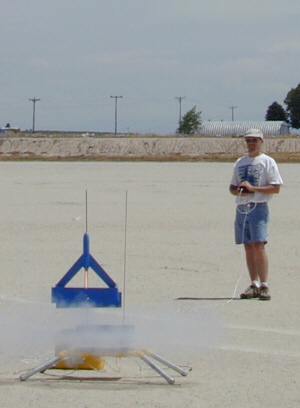 Finishing:
Because of weight concerns I considered leaving the model unfinished but decided in the end to go ahead and give the glider a good paint job as I didn't expect it to perform well enough to overcome the grungy look of an unfinished rocket. I went ahead and used a coat of balsa filler, sanding sealer, krylon primer, and finally a nice coat of glossy blue krylon. Result? Darned nice, actually.

Flight:
Really there is only one motor that is adequate for this rocket given that it requires ejecting the casing in order to be stable for a glide, that is the D12-3. One nice thing, by the way, about gliders like this is the simple prepping -- simply insert motor and fly.

The crowd was a little tense when they first saw the Big Jenny on the pad but their fears quickly disappeared when the rocket boosted perfectly straight up, ejected the motor, and immediately went into a slow, stable, circular glide several hundred feet up. The rocket circled to the ground and made a nice, if not a little bumpy, landing on the dry lake bed. Perfect flight!

I quickly reloaded another D12-3 and launched again within minutes. The rocket again boosted straight up, although not quite as high, but this time after the motor ejected the rocket went into a flat, wafting motion and dropped straight down landing flat on the dry mud. On inspection I found that the motor ejection had also blown the nose cone from the rocket. There was also some slight damage to one of the rudders so I was forced to forego field repairs and take the rocket home. Pros: Glides beautifully!

Cons: Ejects motor, no good for contest use.

Summary:
PROs: This is a great project. I was surprised just how well the glider performed, especially after all my concerns about the weight. This is also a great crowd-pleaser -- unique design.

CONs: Spits a motor casing, a big no-no for some.