This would be a unique and exciting concept to kit for just about any manufacturer. The parallel cluster part of the 2006 Challenge was the impetus for this design. Parallel clusters are great but the existing drop-off pod designs are a little lacking in excitement. The sliding mechanisms on rocket gliders appeared to be ideal for doing double duty as a clamping mechanism for a parallel cluster. It's a natural marriage.

This is a rocket that's guaranteed to wow the kids. It's tall and extremely impressive looking, but where it really hits its stride is when it flies. It roars off the pad on the main booster with a parallel cluster clamped to the side. After staging, the parallel cluster glider ejects from the main booster body and spirals majestically down. The main booster has tumble recovery. The sustainer continues to rocket into the sky. This may be the first time a gliding parallel cluster model rocket has ever been designed and flown successfully.

Build: This is a demanding model to build. Booster thrust and staging is always truly impressive! (See flight video at http://www.brandango.us/htmlpages/rocketvideos.html)

The test R&D example has survived 6 flights and is ready for more, so it's proven sturdy. 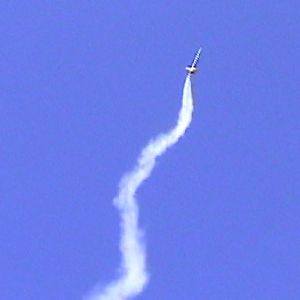 Flight:
Prep is time consuming because you have to wrap bulkheads, make a burn string for the glider, and trim the glider with empty engine casings.

After this flight, the main booster was completely redesigned to achieve tumble recovery. The tail of the sustainer was reconfigured to add more fin and change from 18mm to 24mm engine mount. And some body tube was added to the nose of the glider to move the CG forward.

The second flight was a mess. With the main booster redesigned, the fins on it were too small and the rocket corkscrewed violently under boost. There wasn't enough velocity so even though the sustainer had more fin, it was unstable so it looped and crashed. The glider didn't separate from the main booster so it came down hard but there was no damage. [Main booster D12-0/Parallel booster glider D12-3, Sustainer C11-5.]

After this flight, one of the main booster fins was substantially enlarged (4x) and the sustainer fins were doubled in size to stop the corkscrewing. Also the booster-to-glider mounts were shortened from 1/2 inch to 1/4 inch for better booster/glider separation. And the nose section was rebuilt with a new (simpler, shorter) configuration.

Third flight: The B6-4 delay was too long and ejection came a tenth of a second before the main booster/parallel glider assembly landed in my truck. Two rockets lying in my truck bed were smashed but the glider and main booster were fine. The sustainer flew perfectly. [Main booster C11-0/Parallel booster glider B6-4, Sustainer C11-5.]

The fourth flight didn't have any changes in the hardware. The glider didn't separate from the main booster and the assembly landed hard but no damage. The sustainer didn't eject until just before lawn darting after what seemed like a twelve second delay. [Main booster D11-0/Parallel booster glider D12-3, Sustainer D12-7.]

After this flight, the accordion section (3 inches) on the front of the sustainer body was removed. The booster-to-glider mounts were reshaped to allow the glider to fall off easily upon ejection. 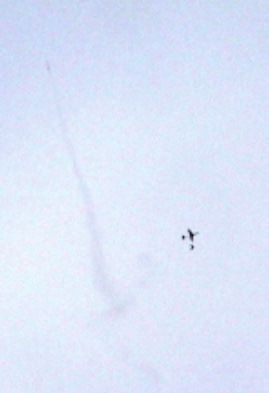 Fifth flight: First perfect flight. Great liftoff, staged with a good, solid pop, main booster separated from parallel glider a second after booster drop off, good fast flat glide after a heart-stopping dive to pick up speed (that could use a tiny bit more stall), and sustainer worked great. Main booster landed on asphalt and knocked a fin loose, but it's fixed. There's a small scorch mark on the glider body tube from the main booster, but it's not enough for a redesign. [Main booster D11-0/Parallel booster glider B6-2, Sustainer B4-4.]

No changes were made after this flight other than to adjust the glider CG for a bit more stall.

After this flight a little weight in the form of some epoxy was added to the outer wing to widen the glide spiral.

Summary:
PRO: Guaranteed to elicit screams of delight from kids and draw a crowd of level 1 through 3 fliers to find out how it works. The vented gap staging always works great. Thanks, Trip.