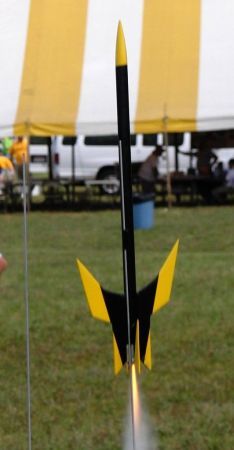 Brief:
The Dark Knight is a 2-stage 18mm rocket with 12" chute recovery. The Dark Knight name came from the shadow produced from the fin profile when the rocket was sitting on the launch pad. It looked similar to the Dark Knight shadow shown on the clouds in the movie.

This is a pretty easy build. First step cut the body tubes to length if you are lucky enough to have a 36" piece of the BT-20 tube available. That's all you will need, however, I needed to use a coupler to join 2 shorter pieces.

Next, I cut the fins out of the 0.125" balsa and sanded them all to ensure they were the same size. I rounded the leading edge on all the main body tubes and left the aft end and 1st stage fins "as cut" so they would align up better. I sanded the fit of each fin to ensure when mounted the seam would be minimized. I labeled each fin so when mounted to the tube I would maintain the same combination. 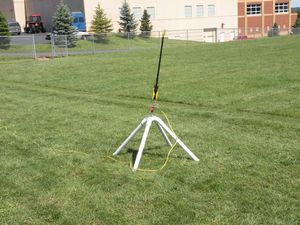 I used the Standard Rockets Fin Jig that I picked up at NARAM to attach the fins to the main body tube and first stage tube. Next, I filleted each fin to the tube with 5min epoxy. Finally, I filled each fin will watered down Emery's wood putty. Then, I started the process of sanding, filling, sanding, filling until I was happy with the finish.

With RockSim, I was able to ensure the flight was stable and determine the potential altitude. (If I give this away, why would you keep reading?) I was a little worried I about stability so I added a little nose weigh to bring the model up to about 3.7oz and figured paint would take it to 4oz.

Next, I attached the elastic shock cord, nose cone, and parachute and headed to my paint booth (the card board box in the garage).

Finishing:
I decided on a nice simple 2 color paint scheme of black and yellow, with a little masking after the yellow was dried and the Black Night was born and ready to fly.

Flight:nd Recovery
For the first flight, I decided I would just verify stability and return the model so I loaded up a B6-4. Nice straight boost, good deployment, recovered only a short distance from the pad (oh, did I mention it was dead calm). Next flight, still single stage on a C6-5, another great flight and about twice the distance from the pad. The wind started to pick up and I decided to hold off on the staged attempt. 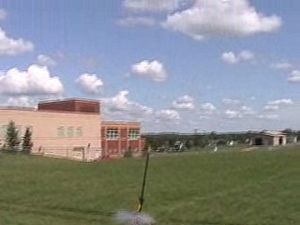 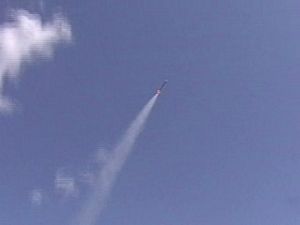 A week later, late Saturday afternoon winds were calm. This was to be the day. I decide to go for the gusto: a C6-0 staged to a C6-5. The boost again was picture prefect straight and longer than I anticipated. The first stage separated nicely and off to the heavens this rocket went, delay, ejection, and parachute. Great recovery. This is a great rocket.

Summary:
As I said above this is a great rocket. I enjoyed the process of designing it on RockSim, building it, and the best launching it.

PROs: Based on altitude achieved, make sure it is a calm day. It screams off the launch pad and flies great. Looks pretty cool also.

CONs: Based on this flight, a very large filed is needed to recover this rocket.