Brief:
Der Mega Max is a BT-80 upscale (158%) of the big Red Max. It is my flying test bed for my new interchangeable motor mount system for BT-80 tube rockets. This will allow single engine or cluster flights with the same rocket. With the addition of a centering ring and the all thread tie downs to another BT-80 tube, the same engine arrangements can be used on another rocket.

Construction:
The rocket consists of the following parts:

The assembly of the rocket should start with the motor mount but this one uses my custom mount which was already constructed. If you are going to build this rocket with a single cluster mount or single engine mount, use at least three centering rings and motor tubes at least 6" long for the mid break design. Use four rings if using TTW mounting. If building this as a nose blow, you will need to use a stuffer tube of some sort running at least 3/4 the length of the main body. You can use the motor mount/stuffer tube design from the Estes

Optima, Broadsword, or Shadow as a guide. Because of the use of my interchangeable motor mount system, a stuffer tube was not going to work. I made the rocket separate in the middle to cut down on the volume the ejection charge had to fill.

Start the build with the center coupler. Place the bulkhead about 1/8" inside one end and apply a generous glue fillet on one side. Set aside to dry standing on end. When dry, flip it over and add another generous glue fillet to the other side and let it set up as well. I used yellow wood glue through out the entire build with one or two CA exceptions. I am very pleased with Titebond II and have had no part failures due to the glue failing. When this is dry, mark a line all around the center of the coupler for location in the body tube later on.

The only thing to do on the upper tube is to check for a snug to tight fit of the nose cone on one end at this time. This will allow you to use the tube as a payload section if needed. Do not glue the cone on if this is what you plan to do.

Use a standard three fin marking guide for the body tube (the Template Widget is great for this) and use it to mark the location of the fins on one end of the lower tube. Extend the marks up from one end at least 6". Add another line the full length of the tube, centered between any two of these lines to be used for the launch lugs.

Time to cut the fins. Using the fin pattern as a guide to mark your wood for three fins. If you are using a glued in motor mount, you might want to add a lower tab to the fins and slot the body tube for through the wall fin mounting. The wood grain should be parallel with the leading edge of the fins. Take all three after cutting, stack them together and sand all the edges flush with each other. I prefer to round the leading and trailing edges leaving the root and tip edges straight. Because of the motor mount sliding in and out of the body tube, TTW fins could not be used on mine but I was able to use the glue rivet method of attachment for the fins. After all three fins were on and dry, I was able to sand the rivets flush with the inside of the body tube. The motor mounts went in and out just fine and I still had the extra strength of the rivets for some F motors. I also like to use thin CA on the lower tips of the fins to lessen the damage of any hard landings. They are the lowest part of the rocket and you know they are going to take the brunt of the worst landings! 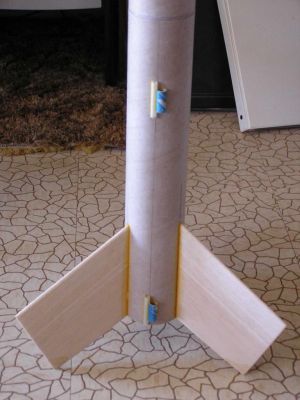 Back to the lower tube. Take the launch lugs and cut both into two equal sections. Take one piece of the 3/16" lug and glue it to the lower body tube on one side of the LL line, 1/4" up from the bottom of the body tube. Take the other piece of the 3/16" lug and glue it to the same side of the LL line 2 1/2" from the top. Make sure the two are aligned with each other and straight along the body tube. When they have set up, take the 1/4" lugs and glue them alongside the 3/16" lugs, centering them to the 3/16" lugs on the opposite side of the LL line. This arrangement will allow you to have a choice of rods to use on the flight line. If one size is not available, you just mount the rocket on the other! Also great if the wind has picked up and the smaller rod is whipping around too much.

At this point the rocket needs some solid fin and LL fillets. I use two light applications of the yellow glue using a finger to smooth them out and plenty of time to set up between the two. That should do it for construction except for one problem that showed up later during flight tests. You need to soak the exposed end of the coupler with thin CA to harden it for sanding. As is, it is too rough to separate freely at ejection. With the CA you can sand it with 400 grit paper to get a really nice, smooth, snug slip fit which will separate perfectly every time. Luckily I found this out before the first flight when the coupler stuck in the lower tube from sitting in the sun. 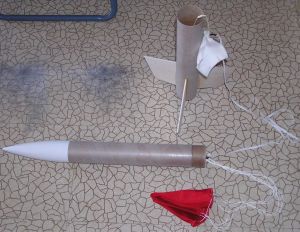 Finishing:
Finishing this one really took up the most time. When I have a rocket this large, I figure it can be seen very well even on a pad 100' away so it needs to really shine! I use thinned out Elmer's Fill 'n' Finish over the entire rocket. It seems like a lot but the stuff really sands like a dream and with 280 grit paper you can have the whole thing smooth and cleaned up in less than an hour. Just make sure you sand outside. The stuff makes a ton of dust. Repeat in any areas that need it and completely prime. I sand the nose cone as well and the Wal-Mart gray primer covers and sticks to the whole thing just fine. In order to get the "look" of the original Red Max, I painted the entire rocket Krylon Banner Red Gloss minus the nose cone. After a day or two of drying, I then masked off the rocket body except for the top 2". I then replaced the nose cone and used Krylon Gloss Black for the top 2" and the cone. This gave the rocket the look of an extended nose cone which is very pronounced on the original Red Max. I think it came out pretty good at that.

After letting the paint dry for two days, it was time for the decals. Fred's decals are top notch but very thin. I coated the entire sheet with Microscale Liquid Decal Film with a wide, soft brush, let it dry about 15 minutes and did a second coat. When this was dry you can cut the decals out and apply them without much trouble. Just remember to "blot" dry the water and not wipe over the decal. They will tear or wrinkle if you wipe. Use plenty of water with a drop or three of liquid dish soap in it and a small soft brush to move the decal around as needed. Where each decal goes is entirely up to the builder as the sheet comes without instructions for this. After two days of drying, I used the large, soft brush to apply a smooth coat of Future Floor Polish and that bird was ready to shine! 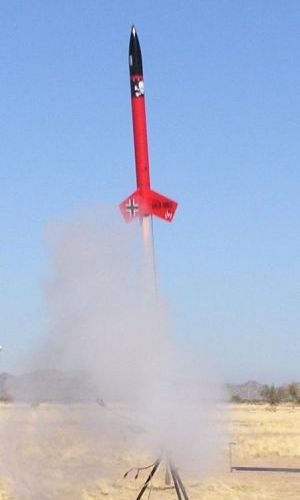 Flight:
The Mega Max will fly on three 18mm C6-5 engines and up. The largest it has flown on so far is an old F25 and it really ripped. The triple C cluster always get the most attention and has flown with all three lit on four different occasions. Single D12-5 engines will get you about 400' and the F motors will send it up about 1200'.

Flight prep consists of about two inches of "dog barf" down the tube with the Nomex® pad next. The pad is attached at the Kevlar®/elastic joint. I have been using a 18" nylon chute with eight shroud lines and all the landings have been damage free, even on some hard pack dirt. Like the original Max and the Goony Max I have flown, this one goes up straight and true with little to no twist. One of the best designs of fin and tube I have come across so far.

Recovery:
All recoveries have been damage free with some drift depending on the wind. The dog barf is good stuff but the Nomex® pad is showing some scorching. Could be the short motor to chute distance or some very strong ejection charges. When packing, be sure your chute is protected well.

Summary:
I have been very happy with this bird and it is a lot of fun flying it on a three motor cluster, then showing back up at the RSO table with the same rocket ready to go on a F25. Then back again with an E9-6 and seeing the looks on everyone's faces! Most people think I have four or more of the same rocket and are very intrigued when they find out it is the same rocket with different engine combinations!