Brief:
This rocket was designed because I wanted to play around with several different things – cluster, 24mm engines, and rear ejection. When the EMRR challenge came around, this one was a perfect fit for the “Twice the Thrust” part of the challenge. I ended up not doing the rear ejection because of all of the fins and pods on the lower part but everything else pretty much stayed as planned.

Construction:
The parts list for this rocket is quite extensive.

Preparation has lots of steps because of all of the parts. Sand and fill the seven nose cones and two 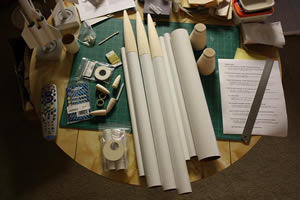 transitions, fill the spirals on the eight tubes, sand and fill the six fins. Whew! Lots of sanding dust here!

Cut a 1” x ¼” hole in one side of each side pod just below the nosecone. Stand the pods up next to the BT-80 (with the lower transition installed!) so the bases are all at the same level. Transfer the location of the duct hole to the main tube and cut the same size hole on each side of the main tube. Make sure all of the holes line up properly! You may want to coat the holes with glue or CA to help them withstand the heat of ejection. NOTE: the holes described above were what I did on the original build. As you will see, they are NOT large enough. You will want much larger holes!

Install a block in the main tube below the duct hole. I used two BT-80 centering rings with the centers still in (glued together for strength). Before gluing the block in punch two holes through the ring and run a Kevlar® thread through the holes and tie it off. Be sure to install the block so the Kevlar® thread is not near either of the ducts! 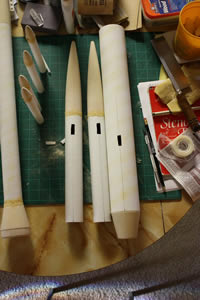 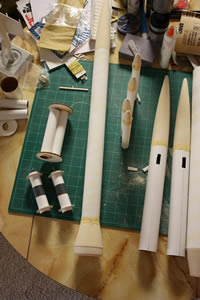 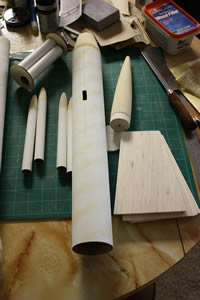 At this point you have a decision to make: the paint scheme. If your scheme will be complex, it may be a good idea to go ahead and prime everything now (masking off the glue points) and paint it all before putting it together. This is what I did. 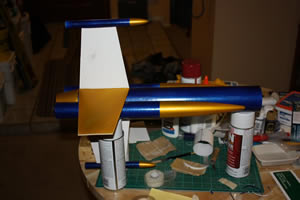 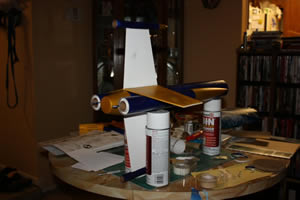 Glue all of the nose cones and the transitions into all of the appropriate tubes. Dry fit everything first to make sure each piece will fit correctly. I had to sand the shoulders of the transitions and a couple of the nose cones. I put filler in the seams and waited for it to dry before sanding it smooth. Do NOT glue the upper transition into the lower BT-80 body tube. That’s where the rocket separates for deployment! Cut the lower shoulder off of the transition on the BT-80 lower tube (it will look like a very short boat tail). Sand the cut end smooth. 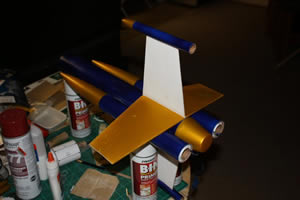 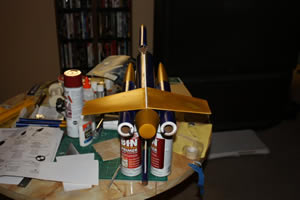 Once everything is painted and dry, glue it all together! Start with the side pods, ensuring they are 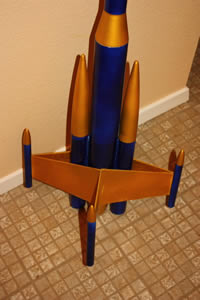 straight and the duct holes line up properly. Once the pods are installed and dry, glue on the upper and lower SINGLE fins. Once those are dry you can either put the end pods on or wait. Doesn’t matter but it is easier to wait. Stand the rocket on one side and glue on the two side fins, ensuring they are flat against the upper and lower fins. You may want to bevel the root edges slightly to ensure a proper fit. Glue the tips together at the end but don’t bevel them! The pod will fit better if you leave them alone. Once one set of side fins are done, repeat the process with the other side. After everything is dry, glue the wing pods on one at a time, ensuring the bottom of the pods are even with the bottom of the fins. In the pictures I centered the pods but on landing the bottoms of the pods got crunched.

Once all of that is done, make the two engine mounts and install them in the two BT-60 side pods.

If you are using the BT-80 baffle, don’t bother doing the Kevlar® thread to the block as described above. The baffle will come with an attachment point for the Kevlar® thread. I ended up not using the baffle which is a good thing because if I did there would not be enough room for the parachutes. 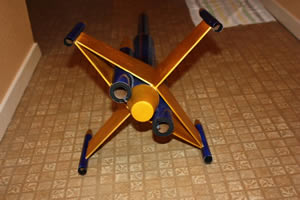 Install the engines and you’re ready to launch!

Flight:
The first flight of the Double Barrel was at the Alamo Rocketeers August launch in China Grove, TX.

The DB was launched under the power of two C11-3s. The boost was brisk and pretty much straight up despite a pretty stiff breeze. Deployment was as expected with the upper section separating cleanly with its small 12" parachute and the lower section coming down under the 24" parachute. The recovery was brisk, though, and one of the pods got crunched a little bit against the hard ground. All of the fins were intact, though. 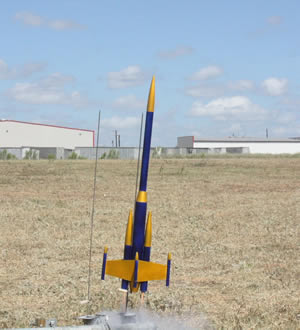 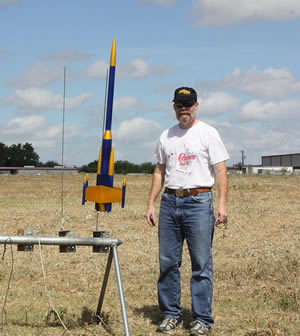 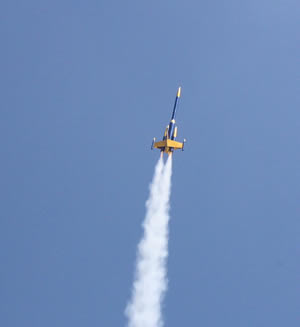 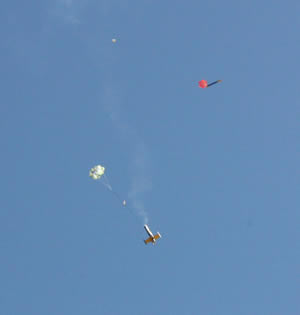 The second launch was on two D12-5s. Again, the boost was very nice but unfortunately we had an accident on ejection. The duct holes were two small on at least one side and the ejection charge blew a large hole in the side of one engine pod up near the nosecone. The upper section did deploy just fine, 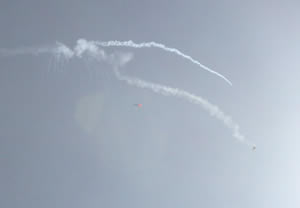 but the parachute didn't come out for the lower section. The DB floated down end over end for a while but stabilized into a tail-first smash into the ground. Only one fin pod was damaged, though, which is really surprising. You can see the final descent on the video.

I will have to repair the hole and make the ducts larger in both pods before trying to launch this again. I really want to see what it will do on two E9 engines!

Summary:
PROs/CONs: This was a fun rocket to build despite all of the parts. The fins were a bear because I don't have a good hand for free-cutting balsa, even with a metal ruler for a guide. Getting the side engine pods on straight was also difficult. Despite all of the balsa, this rocket is surprisingly light.

PRO: The flight was beautiful! Straight up with a nice recovery.

CON: The large fin area make the DB difficult to transport to the launch area. Painting can be a real challenge.