Brief:
This downsized homage to the classic Estes Astron Orbital Transport was done as a kit bash of parts from FlisKits' USS Grissom kit. It's built around a 13mm motor mount and retains the key feature of the parasitic glider that releases when the booster puts on the brakes.

Modifications:
I've always liked the look of my vintage Astron Orbital Transport. While this downsized kit bash isn't 100% dimensionally accurate, the family resemblance to her big sister should be apparent.

Start by building up the large fins on the main tube. Much like the original OT, the downsized wings are fashioned from several aligned pieces of sheet balsa. The wings have different angles of leading edge, and the multiple pieces allow the balsa grain to be parallel to the various edges. Each wing has a major section extending out from the airframe, a smaller section running up along the tube and a small rectangular section on the trailing edge that finishes off the scramjet area.

There are two large tabs on each wing. Each side has a downfacing tab at the tip and an upfacing tab at mid wing. I oversized these slightly relative to a true downsized OT. This was done to improve stability and add strength to what otherwise would be narrow tabs.

Under each wing is a scramjet assembly fashioned from two small tubes encased in a sheet balsa box frame. 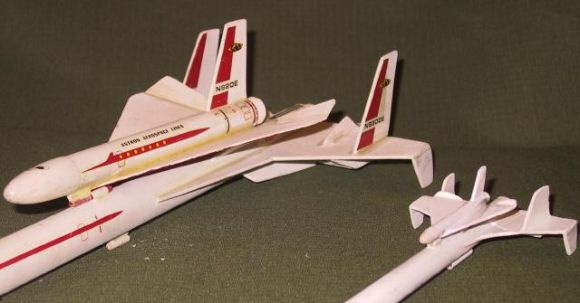 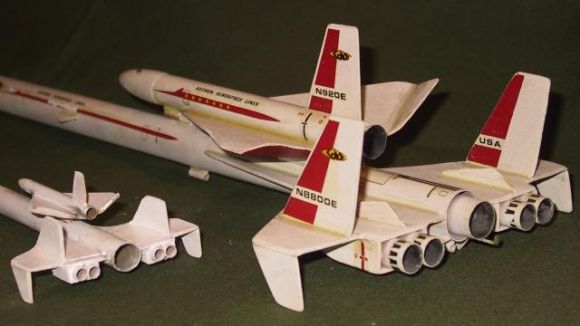 There is no engine clip. Friction and tape are used to retain the motor.

Yellow glue was used throughout to stiffen balsa and form fillets.

The balsa nosecone from the Grissom kit was recycled from another design and had been cut down. Its original uncut shape would be a better match to the vintage OT nosecone. I've used a blue Gnome nosecone in some photos to demonstrate the proper shape. All flights were done with the stumpy balsa nosecone. A bolt and nuts in the base of the nosecone provide nose weight. A length of Kevlar thread connects the nosecone to the elastic shock cord. A streamer was fashioned by cutting the edge off of the parachute from the Grissom kit.

My original OT Glider has always performed well. The downsized glider was fashioned as closely as possible to the original. I had no delusions of recreating the exact fluttering, circular flight in such a small scale. I found it just too small and light to perform meaningful glide tests. The look of the downsized glider was valued over the function. The glider is built like the original with two balsa delta wings meeting at an angle under the glider body. Control tabs are glued at an angle at each rear corner. These tabs are angled to help keep the glider nose up and keep the glide path from slewing sideways. A large tail fin also helps keep the glide stable.

To mount the glider, a short length of launch lug is mounted to the top surface of the booster tube. Two bracing brackets are glued further back on the booster airframe. This is in keeping with how the original Orbital Transport retains its glider.

A hook must be fashioned on the bottom of the glider to fit into the launch lug. In order to keep this a true kit bash, only materials from the Grissom kit should be used for the glider hook. Fashion a small section of two ply balsa plywood by gluing to sections of sheet balsa together with their grains running perpendicular to each other. Once dry, shape a hook shape from the two ply balsa. Glue the hook to the bottom of the glider and shape the jutting portion to fit easily into the booster's glider retaining launch lug.

Construction:
The parts list for the Orbital Transport Downsize is simple enough. It uses a small fraction of what the FlisKit Grissom parts bag contains. It uses a single 13mm body tube for the main airframe and several lengths of 5mm tube to fashion the glider and scramjet tubes. Two suitable nose cones are in the Grissom kit. Other than that, it's largely a matter of lots of fiddly bits of sheet balsa.

It helps to have a full scale Orbital Transport on hand for eyeballing relative dimensions. Barring that, there are a set of OT plans available at JimZ's site.

I used best judgment and gut instinct to make some changes on the fly. The parts from the Grissom won't allow exact downsizing of all components. For instance, the small tubes are too large for perfectly scaled scramjets but too small for the shuttle body. 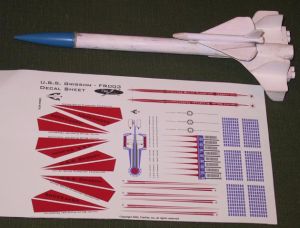 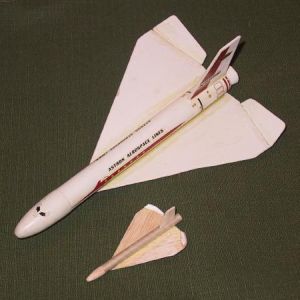 Finishing:
A sanding sponge with a parallelogram shape provided various edges for sanding the nooks and crannies around the wing tabs. A blast or three of white spray paint seals everything quickly.

There are lovely red decals provided with the USS Grissom. These can be cut down and pieced together to approximate the red decals on the original Astron Orbital Transport. I haven't taken that step as yet as I wanted to wait for a flight test before committing the limited supply of decals.

I tried to increase my odds of recovering the rocket by attaching the glider so that it wouldn't detach at apogee. I used a small piece of elastic to hold the glider tightly to the booster. A shorted igniter and resulting burning igniter tape caused a small pad fire that burned through that elastic and sooted up the back of booster and glider. A quick re-tape was done and another igniter installed. 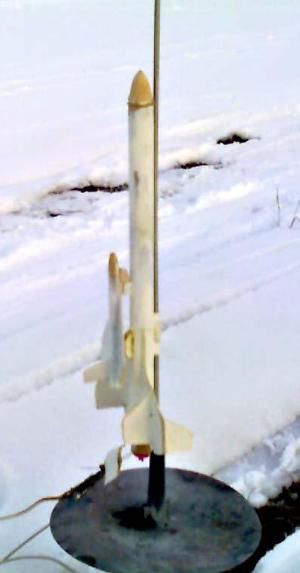 All alone on the snowy field, I counted down and touched off the modest A3-4T. Oh my, too high! An arrow straight boost to several hundred feet caused me to lose the small white rocket in the afternoon sky. I picked up the tracking smoke, heard the pop, and saw two pieces head in different directions. I caught sight of them both again at about 50 feet up. The shock cord had snapped. When the booster was found bellied into the snow, the glider was not on board. Drat! The tape was still on the booster but one end was loose. The airflow must have peeled it off the glider. The nosecone and streamer were easily found.

The Glider was not found that afternoon. I did retrieve it the next day. While its flight was unseen, it managed to land a good 100 feet further away than the nosecone and streamer drifted.

On that first day while mourning the potential loss of the little glider, the shock cord was retied. A more modest 1/2A3-2T motor was loaded up. This flight minus the missing glider was also arrow straight to at least 100 feet. The ejection popped out the streamer and all was recovered intact.

A third flight on another 1/2A3-2T resulted in the motor kicking out the back of the booster. The nosecone popped out but the streamer didn't. The booster bellied into the snow without damage after a flat spin. 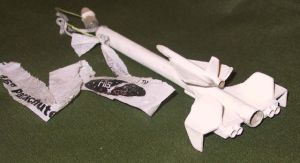 Recovery:
CON: That is one small glider. So small that I never saw it release, fly, or land. Flying a white rocket on a snowy field might have something to do with losing track of that little bit of balsa.

Summary:
What started as a mission to make a downsized display model of an old classic ended up creating a well performing flier. I'll have to build another glider and decide whether it's just too small to fly freely. It might be best to just leave the shuttle bonded to the booster back.