Brief:
This is a mini engine powered downscale of the Centuri ESS Raven contructed out of cardstock, featuring streamer recovery. This was one of my favorite designs of my younger days that I never got a chance to build. The two plan sheets give you all the parts needed and then can be assembled using the plan set from Jim Z: http://www.dars.org/jimz/cen5312.htm

Construction:
Components consist of two plan sheets that should be printed on 65 lb. paper. (Plan Sheet 1 - 892K; Plan Sheet 2 - 371K) There is a lot of unprint area on the sheets and that will be used to laminate the parts to make them sturdier. In addition a 12" length of 1/8" elastic was used for the shock cord, a 1" X 10" streamer cut from a plastic tablecloth, and a small ball of clay for nose weight..

The parts were cut out and the wings, main fins, stabilizer, wing support, stabilizer support, landing gear, sensor pod, and scoop were glued onto the excess cardstock and placed between wax paper on a flat surface under a heavy book until dry.

The body tubes were pre-rolled by placing them printed side down on a mouse pad and rolling a dowel over them until they started to take shape. Expended motor casings were used to roll the body tubes. I rolled the tube until it just started to overlap and then spread Elmers white glue over the exposed tab with a Q-tip and finished rolling. If you're careful, the edge should just match the color seam line. Place them aside to dry.

I pre-rolled the body tube coupler, nose cone shoulder and engine block and placed them inside the completed tubes to check for size before glueing them.

When the flat parts are dry, cut out the parts and glue together the top and bottom wing parts, left and right main fin, top and bottom stabilizer, scoop support and place them back under the book to dry.

From this point, the downloaded instructions can be followed. Make sure to put a launch lug on before gluing the nacelles. When attaching the wings, line up the pre-printed markings. This model uses an engine block. Glue is smeared in the body tube about 1 1/2" inside the rear tube with a Q-tip and the block pushed in with an expended motor until 1/4" is exposed. remove the motor immediately.

Finishing:
The finishing of this model couldn't be easier. Everything is pre-colored and I used a couple coats of gloss clear to seal the ink. 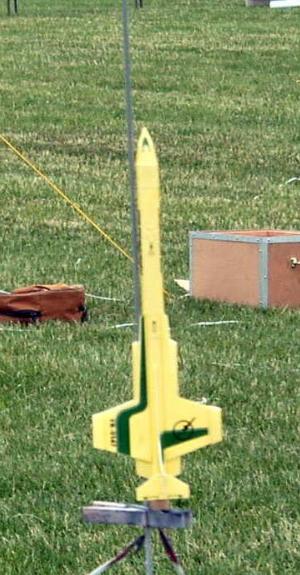 Flight:
The model is light enough to use 1/4A through 'A' 13mm mini engines. There really is no need to use A10-3T's in this light a model as the A3-4T has plenty of power. I used a 1/2A3-4T for the first flight. The motor is a friction fit using masking tape. I used two squares of wadding but cut each square in half because of the small body tube. The launch was straight and fast. I almost lost sight of the model against the overcast sky. I was able to pick up the streamer in the air for a successful recovery. The streamer really isn't needed and is there to help spot it. The second and third flights were repeats of the first.

Recovery:
The streamer probably isn't needed but helps in locating the model both in the air and on the ground. There is not a lot of room in the body so packing the shock cord and streamer must be done carefully.

Summary:
I really enjoyed making this. The model looks a lot like the full size Raven.

Other:
This was one of my first attempts to recreate some of the classic models in a small easy to handle size.