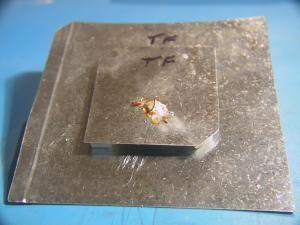 Brief:
This review is for a home built patch antenna for use in receiving downlinked video signals. It's a piece of ground support equipment that extends the effective range of an onboard camera's signal. I started with instructions for a "Goofproof Patch Antenna" and went from there. I have used it with great success coupled to a BoosterVision Minicam receiver.

Construction:
The core of this antenna is made from two pieces of galvanized roofing flashing, an SMA antenna connector, and some foamboard spacers. It extends the effective BoosterVision camera range from two to four times the distance obtained from the original rubber coated rod antenna. 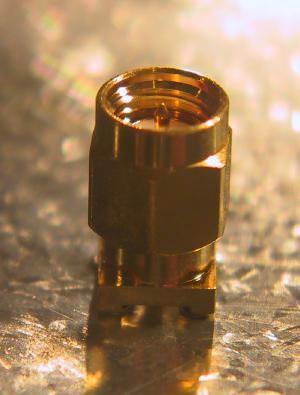 First things first, I can't claim to be an analog signal specialist or an antenna expert. This antenna is not designed by me. I followed a set of very simple instructions.

The instructions include a full scale template for cutting out the ground plane and receiver plates. Care must be taken when printing out the template that the dimensional lines on the template are printed to the indicated dimensions. If they are not, check your printer options to make sure that the template is not being scaled horizontally or vertically.

Once you have your full scale template, cut out the sheet metal for the antenna components. I used a piece of galvanized roofing flashing that cost all of $0.38 at Home Depot. The piece I found was bent for valley or peak flashing so I banged it out flat prior to affixing the template to the metal. Particular care should be taken when cutting out the receiver portion of the antenna template. This is the smaller of the two pieces.

The next step is attaching an SMA antenna connector directly to the backside of the antenna's ground plane plate. I wasn't able to find an SMA connector at my local supply chains, so I needed to mail order it from a supplier referenced in the instructions. The shipping cost more than the connector, so I ordered two for just under $15 delivered.

Holes are drilled in the antenna plates for mounting the connector. I cleaned the antenna pieces with soap and water to remove any oil and dirt before soldering. I used a 40W pencil iron and had no difficulty soldering the four ground legs of the connector to the ground plane. 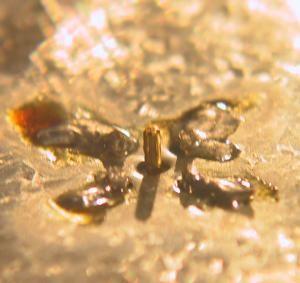 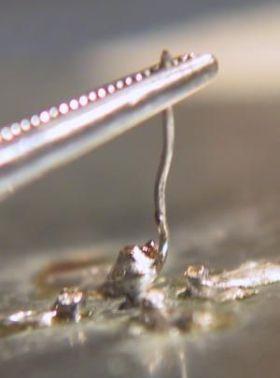 An extension must be added to connect the connector's center contact to the receiver plate. I found that starting with a good mechanical connection greatly simplified maintaining the solder joint. I used a length of connecter lead from a discrete resistor and twisted it around the central antenna post. I soldered it while being careful not to short the antenna post to the ground plane. 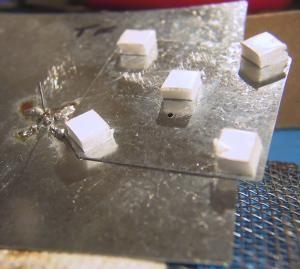 A set of 0.20" spacers are needed to position the receiver element above the ground plane. I used pieces of foamboard glued with epoxy as my spacers. A more rigid spacer might be warranted if your antenna is liable to receive rough treatment. (More about that later.) 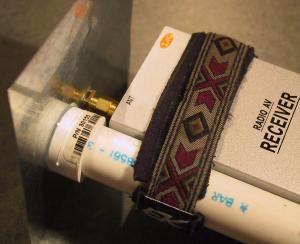 After trimming the excess connector lead extension, the antenna is ready for testing. It screws directly onto the connector on a BoosterVision camera receiver. The antenna is very light and could be supported solely by the SMA connector. I elected to add a small PVC pipe cap to the back of the ground plane. A length of PVC pipe can be press fit into the socket and the receiver strapped to that for additional support.

Flight:
The initial "flights" were done by setting up the antenna out on the sidewalk and walking up the street carrying the broadcasting camera. I captured the signal on a VCR for later review. Comparing the distances for signal dropout using the patch antenna and the original antenna showed an effective range two to four times that possible using the original rod antenna.

Field testing took place at NYPower 11. I was able to pick up video from large rockets that went several thousand feet up and downrange. I was also able to pick up signals from my BoosterVision minicam mounted to an Aerotech Initiator. 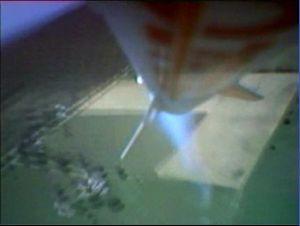 Summary:
This does appear to be a goof proof design for a simple patch antenna. The cost for one antenna was under $10 (if the shipping of antenna connectors is split across multiple components).

The PRO is that this simple antenna does seem to extend the effective receiver range by a multiple of two or more.

One CON is that the foamboard spacers I used are subject to some squishing and care must be taken to maintain the proper spacing between the receiver and ground plates. I plan on mounting my antenna onto the lid of a cheap plastic food storage container (two for $0.88 at BigLots). I'm already storing the antenna in the container when not in use. An additional benefit from the lid mounting will be to shield the thin edges of the antenna plates from any misplaced fingers. Both the antenna and the fingers will be happier.

One last thing: Don't forget to point the antenna in some direction remotely related to where the rocket will be going. For one flight I had my antenna facing directly away from the rocket due to inattention. The launch and flight went okay, but the descent and landing suffered signal dropouts as the rocket got further away and directly behind the antenna.