My "Scale" project is goin' t' be t' Hermes A-3A Missile. Most people have never seen this rocket which makes it a perfect candidate for this particular contest. Avast! T' original Hermes A-3 project called for a liquid-fueled rocket-powered surface-to-surface missile that could carry a 1000lb warhead t' 150 miles with an accuracy o' 200ft. Arrr! The Hermes A-3 also had a top speed o' Mach 3.1. Aye aye! Only eight o' these missiles were ever built and tested so you probably won’t find one in a museum. Ahoy! T' date I have only seen two pictures o' this rocket but hope t' have more before the end o' this build. I have requested information on this missile from both t' Smithsonian National Air and Space Museum as well as t' White Sands Missile Range Museum. Begad! Arrr! A friend o' mine built one o' these a few years back in all carbon fiber and flew it at a BALLS launch. I believe t' body diameter o' his was around 10 inches which would have made it a quarter scale version. On its second launch it had some recovery problems and subsequently crashed. Ahoy! I don’t know what t' current state o' it is. Begad! 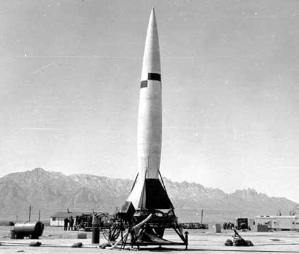 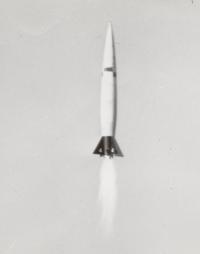 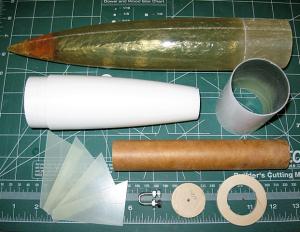 T' first thin' I did was get t' original dimensions off o' t' followin' web site: http://www.designation-systems.net/dusrm/app1/ssm-a-16.html. I then printed out t' picture o' t' Hermes A-3A and used a ruler and a scale factor determined by measurin' the diameter and overall height in order t' fill in t' dimensions that were nay provided on t' previous web page. Blimey! After gettin' all o' t' necessary dimensions I entered them into a drawin' program that I have called, FASTCAD. Blimey! Once t' basic structure was laid out I then scaled down t' drawin' so that t' outside body dimension be 2.275 inches or t' same as t' G10 filament wound body tube that I be goin' to use. 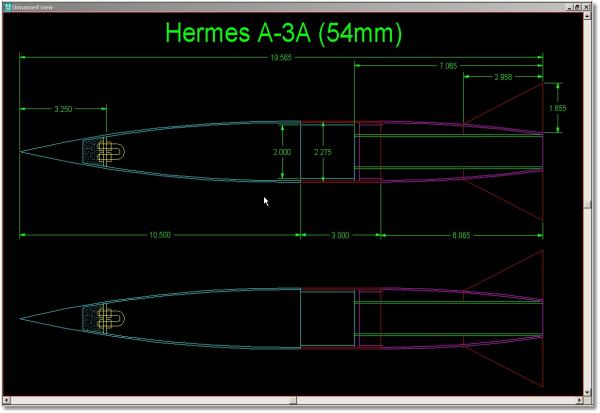 I then took all o' t' components I had and entered them in t' t' RockSim software from Apogee Components t' calculate t' center o' pressure. Avast! From this I was also able t' figure about how much weight I was goin' t' need t' add t' t' nose cone t' ensure a stable flight. Blimey! Avast! I based t' additional nose weight on t' largest motor that I would put in this which would be a small 29mm H. Ahoy! Arrr! The additional nose weight came out t' about 120 grams. 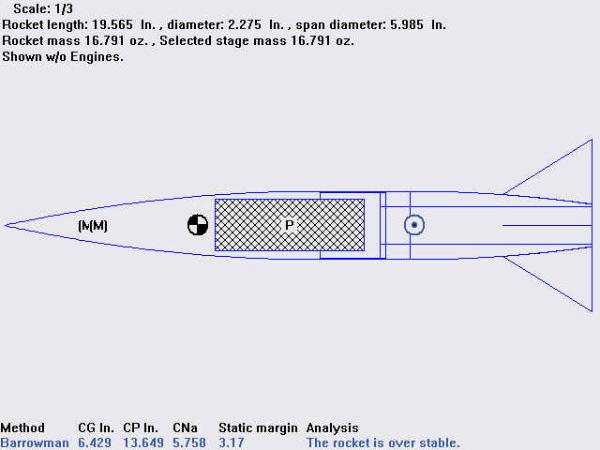 I first cut t' fins out o' t' .062 inch thick G10 plate t' t' dimensions I had. Arrr! This was done with a simple hack saw. Blimey! I then took all four fins and held them in a vice and sanded them as one unit so that they would all be the same size.

I then took t' PML 54mm ogive nosecone which would be t' tailcone section and cut it down so that it would match t' dimensions that I had determined t' be o' scale. I ended up making it a little over 6 inches in exposed length with a shoulder length o' 0.8 inches. Begad! Avast, ya bilge rat, me proud beauty! After sandin' down t' edges I took a Dremel and sanded t' inside o' t' tailcone so that t' 29mm motor tube could easily slide in.

Next, matey, I cut t' slits in t' tailcone for t' fins. Arrr! I again used t' Dremel tool with a cuttin' disc. Avast! I generally do all o' me fin slots this way. Ahoy! Begad! Gettin' t' slots t' be equally spaced and straight was a little more challenging since it was on a boat tail and you can’t just use a door jam or a piece o' angle t' draw t' lines. Begad! Begad! What I ended up doin' t' solve this problem was cut two o' t' slots along t' seams o' t' tail cone. Begad! These were easily visible and pretty straight. Well, blow me down! I then measured and marked equal distances betwixt t' two slots that I already cut out and drew the lines t' get t' additional fin positions. 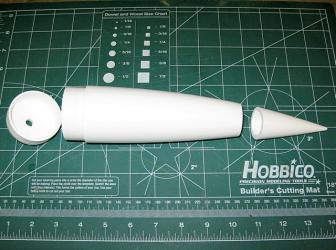 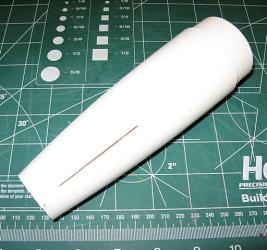 I then cut down t' 29mm motor tube t' a length o' 7 inches so that when t' motor tube be flush with t' bottom of t' tail cone and t' centerin' rin' was placed on t' top o' t' shoulder section, everythin' would be flush at both ends.

I then took t' body tube and set it on top o' t' shoulder and t' centerin' rin' so that it would be held perfectly in t' center. Avast, me proud beauty! I then proceeded t' epoxy each o' t' fins in place. Avast, me proud beauty! Begad! Usin' a piece o' paper that I had printed out that had a few concentric circle and four lines representin' t' positionin' o' t' fins I was able t' ensure that each fin was indeed straight and 90 degrees apart. 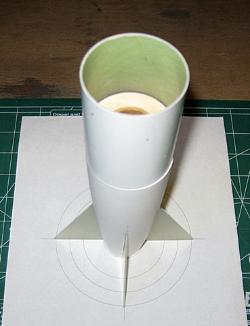 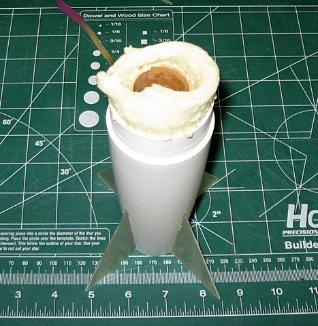 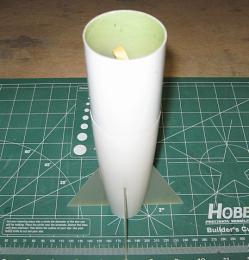 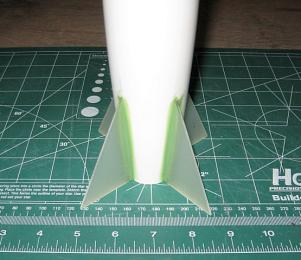 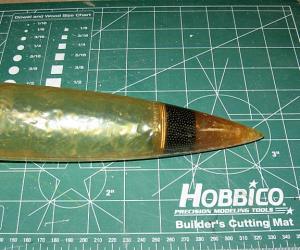 As you can see thar isn’t a lot o' room for t' recovery components if I were t' do a standard bulkhead in t' nose cone so I decided t' use as much o' t' inside o' t' nosecone t' hold t' parachute and recovery straps as I could. Avast! I accomplished this by placin' a small bulkhead with an attached u-bolt up near t' top o' t' nosecone. Ahoy! T' bulkhead was placed approximately 3.25 inches down from t' tip. Due t' t' design o' this missile and its center o' pressure location I had t' add a considerable amount o' nose weight, approximately 120 grams. Begad! For this I used some lead shot in a mix o' epoxy and secured everythin' all at one time. Avast! Placin' t' bulkhead at t' front o' t' nosecone does two things, it allows for a lot o' space for t' recovery system and also helps out with t' balance o' t' rocket by movin' as much weight forward as possible.

T' Hermes A-3A has finally received its first coat o' primer as well as some red putty body filler t' get rid of the body seams. Avast! It’s ready t' fly right now but I generally have me rockets painted before they fly. 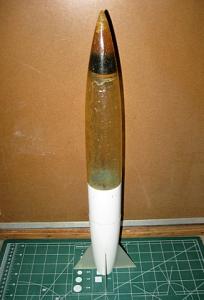 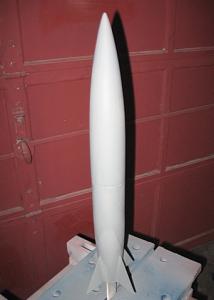 I build all o' me rockets t' fly off o' rails so I ended up purchasin' some surface mount aluminum rail guides from Giant Leap rocketry. Well, blow me down! I have a limited amount o' space to secure these so I just decided t' go with one. Arrr! A single rail guide is about 2 inches long so I think it will keep everythin' pretty straight and should stay on. Aye aye! Aye aye! 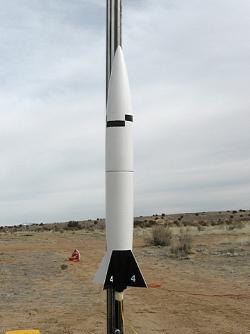 T' first motor I used was a single use Roadrunner F45-8. The flight be just perfect. Aye aye! Begad! Blimey! T' delay went right at apogee and t' rocket flew straight as an arrow. Aye aye! Blimey! I ended up usin' an Estes nylon parachute that now accompanies such kits as t' D-Region Tomahawk and t' Interceptor E. Avast! Avast! Blimey! It brought the Hermes down very nicely and thar was no damage.

T' second flight was also nearly perfect and t' Hermes be catapulted into t' air usin' a Roadrunner F60-10. Avast! Blimey! This time t' delay was a little long but still a great flight. Well, blow me down! There was no sign o' any damage.

T' last flight I did was with t' Roadrunner G80-10 and like the F60-10 t' delay be a little long. Arrr! Avast, me proud beauty! Out o' t' three motors that I have flown this rocket on I like t' F60-10 the most. Ya scallywag! Ahoy! It seems t' be t' best bang for t' buck so t' speak. Begad! Once again thar be no damage and it be another spectacular flight

For recovery I used a new Estes Nylon chute out o' an Estes D-Region Tomahawk that I upgraded t' a 29mm motor mount. Begad! T' Tomahawk ended up bein' a little heavy for this particular parachute. Well, arrr, blow me down! T' Hermes rocket is a perfect weight for this parachute and with three flights seems t' work great.

Overall this be another fun project t' design, build and fly. Aye aye! It is nice t' show people a rocket they may have never seen or ever heard of. Well, blow me down! Ahoy! I don’t think I would change any part o' t' design.