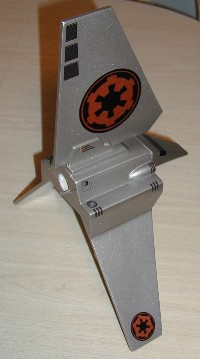 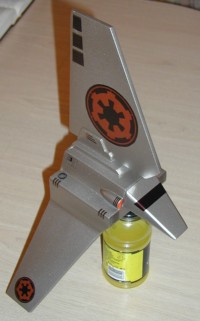 Almost 1 year to the date, I determined that I was going to build a 29mm scratch Star Wars Imperial Lambda-Class Shuttle. But that isn't what this article is about, you can read about it here. While building the 29mm version, I decided that I ought to build an 18mm version to test out the flight characteristics and concept. It turned out so well that I sold 36 kits and currently offer plan-paks. This article isn't about that version either, but you can see Jason's review of one here. I also generated plans for a Micro-Maxx version and have forwarded them onto someone who may try to kit it. But, you guessed it, this article is not about the MMaxx version either. No, this article is about what I thought to be the perfectly sized Lambda-Class Shuttle; the 24mm version.

The project was relatively straightforward since I simply took my 18mm designs and scaled them up to 24mm. But I planned a number of various enhancements:

The primary objective was to be able to have the rocket capable of flying on 24mm motors and especially Aerotech's 24mm RMS (which I am a huge fan of). I wanted the weight to be kept down, but definitely wanted to strengthen the wings since the upper wing on both the 29mm and 18mm version have proved to be a weak spot.

I decided to create a double-ply wing. This turned out to be outstanding (as you will be convinced of when reading the flight section).

The build was pretty much the same as the 18mm version. It is build up on a 1/4" base of balsa. Everything else is balsa with the exception of the 24mm (4" long) motor tube, the plastic nose cone (inner structure) and the recovery system.

The Kevlar® shockcord was tied to the top of a standard Estes motor retainer. This is then glued along side the motor tube. I didn't use any "banding" like other kits, so it is just glued with epoxy heavily, leaving the bottom 1-2" with no glue so that it will flex outward.

Then with wax paper, business cards or card stock, a lot of 5-minute epoxy and some heavy books I commenced to put the pieces together.

I would lay one wing on top of some wax paper on a table. I mixed up a lot of 5-minute epoxy (better to have too much) and then spread it out on the balsa wing. I took care not to have it drip down the edges of the balsa. I then used a business card to spread the epoxy around and to make it very thin. I would continually be wiping off the excess. I ensured that it was thin (wet) and even, then I put on the second piece of balsa. I pushed them together and aligned them. I placed another piece of wax paper on top and then stacked on the books and went away for an hour.

The next step was to apply epoxy, in the same manner, to the outside of the fin and apply the tracing paper (seal). I, first, did one side, ensuring to use the wax paper and heavy books immediately afterward. I only waited about 15 minutes and flipped it over to do the other side. Then I waited at least 1 hour.

There was some clean up, since all the patterns didn't match perfectly. So using a sanding block, I squared the edges, sanded of any epoxy that seeped out, and trimmed the tracing paper (which is stiff from the epoxy so it sands fine).

The finished rocket weighed in at 9.6 ounces, so I lost the "C11" capability, but, felt that 24mm RMS and "E9" were still possible. 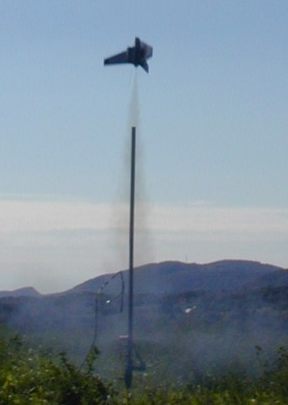 So, I set off for my first flight attempt and used an RMS D15-4. The flight was great! This rocket design gives a very unique flight pattern. Regardless of the size (29mm, 18mm, or 24mm), the flight pattern of this rocket is interesting. It is generally straight and stable off the pad until thrust stops. Then it levels off and coasts at a small angle upward or near horizontal. Then ejection.

Well, the flight pattern of the RMS D15-4 was not different. Very enjoyable. But the 4 second delay was too long, so no ejection.....until........ ~3 foot off the ground. Shredded the parachute, drove the nose cone into the soft dirt. But, what is this? Lookie there, the upper fin did not break! In fact, the upper fin is so strong now that the upper canopy cracked the length and the upper wing detached from the inner tube. (NOTE: On both my 29mm and 18mm the upper fin would crack on landings right at the part that hangs over cockpit with no support. It would crack with the grain of the balsa). 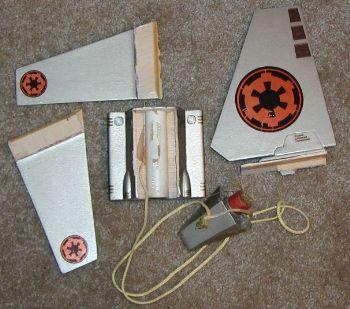 The rocket was repaired and I waited for another opportunity to fly it. That opportunity came a month later. Well, I don't why, but I did. I was out flying and said to myself, "self, I supposedly designed the 24mm Lambda to fly on Estes D12's, so let's give it a try." I apparently wasn't thinking as I loaded an Estes D12-3 into the rocket, especially, considering the D15-4 results!

Great flight to watch as it thrusted about 25 feet and then went nearly about a 30 degree trajectory to about 50 feet then headed down. At the exact time it hit the ground the ejection fired! Upon impact, this rocket just totally came apart.... you'd think it was part of the design!

But, again, the most pleasing thing is how well my wings (fins) held up. The technique I used really made them strong. Look, no damage and it came in hard. The interesting thing, is the separations are so clean that I actually can glue this all together and try yet again. 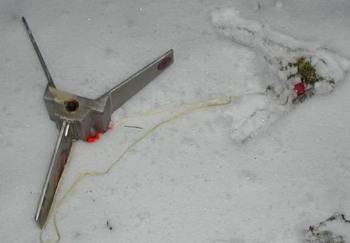 Since the breaks were so clean, I put this rocket back together again. All the cracks were repaired with super thin CA, the pieces were re-attached with 5-min epoxy and then lightly sealed with 5-min epoxy. The one exception is that the bottom of the upper fin to the motor tube was hit with a thin coat of Gorilla Glue (polyurethane) so that it would expand into the gaps.

It was another month and in the snow of Vermont that the 24mm Lambda flew again. This time on an E28-4 (RMS). I have to admit, this is the right motor combination... BUT, at what would have been the perfect point for ejection I heard, phhisssss. I had hoped to hear a pop!

Here is what I believe happened. I did not put a lot of the BP in the ejection cap of the 24mm RMS motor. I used the red cap. Since this rocket goes nearly horizontal at end of thrust (this is consistent), I believe the BP spread out in the red cap and therefore did not pop and also there may not have been enough BP to overcome the tightness of the red cap and therefore hissed out the thrust nozzle. No damage other than a slightly stretched out motor tube where the nose cone inserts. 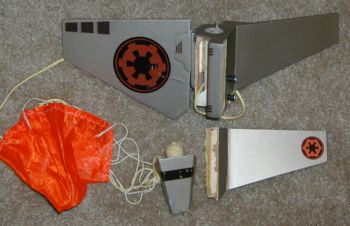 Attempting to get it right, I popped out 3 days later with only 1 flight intention. The 24mm Lamba on another E28-4.

Another great flight, which confirmed the E28-4 as a good motor for this rocket. Ejection worked this time! The parachute even came out!

Upon landing (using the small 'chute) the lower fin broke off, due to damage on previous flight the motor tube and upper canopy were damaged. She's done!

If anyone would like the templates for this version, let me know. 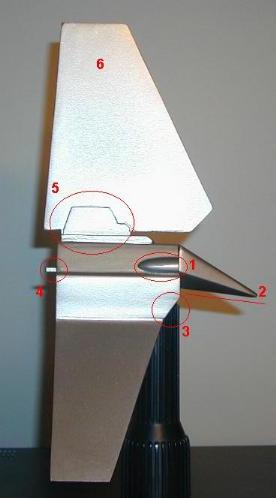 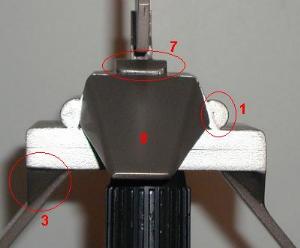 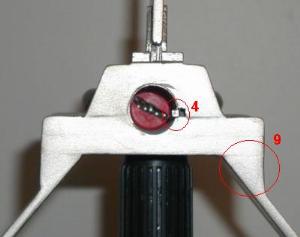