Note: This is a slightly condensed version of all the information that Bruce has produced for his Level 3 project.

Introduction:
Early this year, I decided I would build my Level 3 project this summer. After contemplating a clustered Pterodactyl, and a large Nike Smoke, I looked around my shop and decided I would scratch build from polyethylene. This stuff is tough and it's a breeze to work with (for me anyway).

The rocket's name is: OBXLFP1 (aka Homer)

Parts Description:
This rocket is made almost entirely of polyethylene. Other materials include a 6061 aluminum motor retainer, and stainless threaded rod. The rocket will weigh ~50# loaded and fly to ~7000feet powered by an Aerotech M1315.

I chose polyethylene because it's really hard to break. Polyethylene is approximately .92 g/cc. I think you would have to get it around -60 deg F. before you could fracture it. The tube is molded LDPE. The tubes are molded by Ideal for bollard covers. The thickness is .2-.25". I just cut them up and removed sections to make couplers and weld them back together.

I probably could use smaller thicknesses but we will see how this one goes first. Oh yeah, on the fracture concern... For a rough material test, I cut a 15" length of HDPE 1/2" x 1/2". I put one end of the strip in a vise and beat the heck out of the other end with a big hammer.. Result: a little dinged up and slightly bent. Pretty scientific, huh? 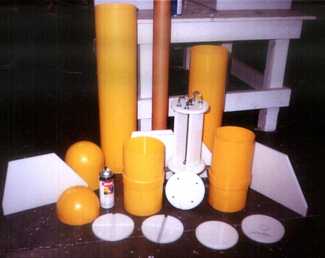 Everything was done with table saw and routers.

The welding is standard plastic welding: I use a Kamweld or Leister welder. The units use electricity and shop air to provide heat and welding rod of the same material you are joining. I build plating lines so I'm pretty familiar with different plastics and fabrication techniques. 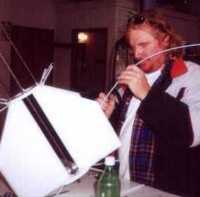 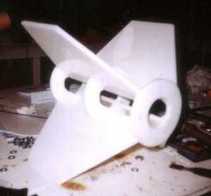 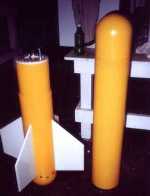 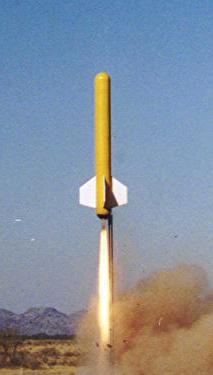 The entire plan came together flawlessly.

Ron Zeppin of Access Rocketry e-mailed me Wednesday evening (3 days before launch) to indicate that my Kosdon M-2240 was on hand.

I had previously decided to use the Rocket Rage deployment bag and rigging provided by Carl Delzell with my RocketMan R14C ProExp 'chute for a "just right" fit in the airframe.

Testing had shown 7 grams of black powder to be the number.

Saturday brought another beautiful desert morning to Rainbow Valley. Many people had come expressly to see the Gila Monster launch. This was the biggest crowd I had seen at an AHPRA launch. Some photos are up at AHPRA.ORG

I prepped my motor and altimeters and fiddled about for retention of the Kosdon motor. My retainer was made for the Aerotech M-1315 and I decided to use an eyebolt at the top for this motor. I decided to add 4 pounds of ballast to bring the static stability margin over 1 diameter.

At about 12:30 Larry Gabriel, Brian LaFramboise, and Marc Casanova helped me set up at the pad. Marc had come early and set up his 12 foot rail and provided a nice big clearing. Fire would be a big threat today. Sarah O'Brien would do the video honors. Eric O'Brien was busily fighting the blaze over at Steve Robersons launch trailer where the Gila Monster had recently thrusted skyward.

After the blaze was extinguished and the Gila Monster had returned to earth, I listened for the countdown and pushed the launch button.

The OBXLFP1 roared instantly to life and proceeded skyward post haste. The flight was beautiful and fast despite the desert breeze that had kicked up. (A dust devil came right down the flight line and destroyed my canopy while fanning the Gila Monster fire) It seemed like alot was happening right around then.

The Kosdon motor has a big smoke element that kept a nice white plume going all the way to apogee. My adept recorder showed max alt 5544 feet, 555 MPH and 14.6 gee's. I think I could have done without the extra ballast and gained about 500 feet.

The chute and rigging worked perfectly, returning the sturdy plastic bird to Earth safely without a scratch about 3 minutes later.

The tailcone was blackened from the smoke element but was not burnt. The rocket was in perfect shape. High-Fives all around.

I paraded around the flight line like a peacock gathering signatures from Mark Clark and Paul Robinson.

What a great day !

What's next? The picture above-left is Homer2. The two-stage version of OBXLFP1 (aka Homer)! Click Here for the RockSim