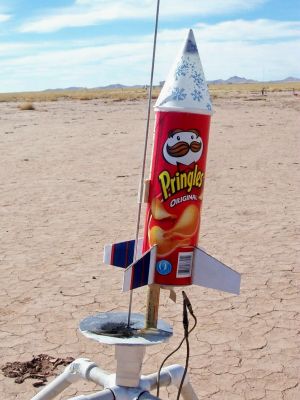 Brief:
I have wanted t' build a rocket out o' a Pringles can for a long time now and I finally got t' opportunity with this recycle contest. 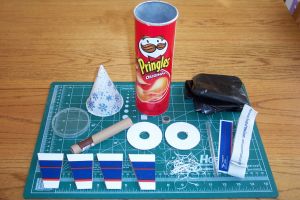 I first started by cuttin' out t' centerin' rings and fins out o' a USPS Priority Mail box that I received via an eBay auction. I then attached t' two centerin' rings t' a Garcia & Vega plastic cigar case usin' two-part epoxy. Avast, me proud beauty! Well, blow me down! Blimey! I decided t' use t' two-part epoxy since thar are many different materials bein' used and didn't figure t' plastic cement or white glue would have t' bondin' strength that I was lookin' for. I then applied some epoxy approximately 2-1/2 inches into t' motor tube t' secure t' motor block. I then inserted t' slice o' a used Estes C motor casin' into t' cigar case and then used an Estes 18mm motor t' push t' slice t' t' correct depth. Well, blow me down! Blimey! This is pretty much a standard motor tube buildin' practice when thar be no metal engine hook bein' used. 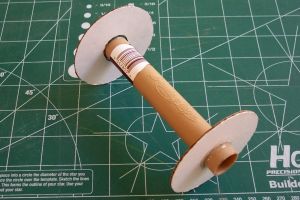 Next, me bucko, me bucko, me hearties, I scratched off some o' t' Pringles label so as t' make a suitable surface t' attach t' cardboard fins. Aye aye! Arrr! I then attached t' four USPS cardboard fins t' t' Pringles can with two-part epoxy. Avast! T' fin dimensions are a 2” root edge, matey, matey, a 1” tip, and 3” wide. Avast, me proud beauty! They were also cut from t' folded edge o' t' box so they are double thick. 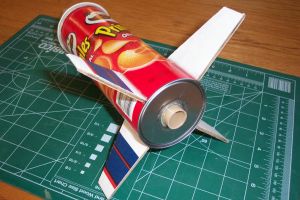 I made a slit in t' Pringles plastic lid and fed one end o' t' “Fruit o' t' Loom” elastic through t' slit and epoxied it in place.

I then secured t' launch lug assembly t' t' Pringles can usin' two-part epoxy and scratchin' off some o' t' finish on t' can so that a good bond could be made. I ended up cuttin' two 1.25” pieces o' a Bic pen t' be used for t' launch lug. Arrr! Blimey! I stacked one on top o' t' other so that t' launch rod would clear t' overhang o' t' nose cone. Ya scallywag! Blimey! T' launch lug is located approximately 4 inches from t' bottom o' t' can. Arrr! Blimey! This location roughly straddles t' CG o' t' rocket. 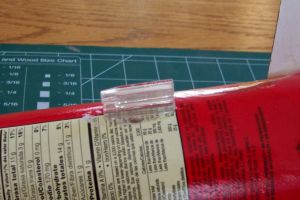 Finally, I made t' parachute usin' an Estes 24” parachute as a pattern on t' black plastic garbage bag. Well, blow me down! Ahoy! I then attached t' Priority mail label stickers that were cut down into approximately ½” squares so that I would have a place t' attach t' lines. Blimey! Ahoy! I poked a hole through t' stickers and fed t' dental floss through t' hole and tied it off. Avast, ya bilge rat, me proud beauty! This be t' same procedure that Estes recommends. Blimey! I then attached t' parachute about 2” down from t' plastic lid.

Finishing:
There was no finishin' done t' t' rocket so as t' specifically show off t' recycled parts. 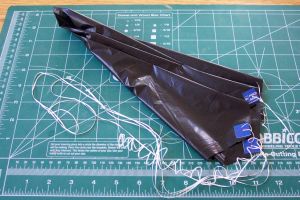 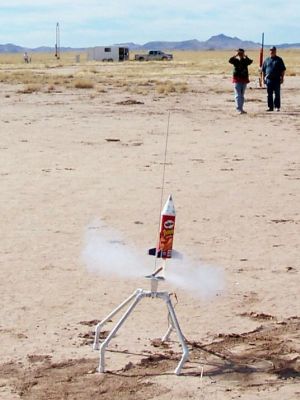 T' fourth flight was nay so perfect. I ended up usin' a single-use Aerotech D21-7 motor. I thought that t' delay might be a little long but decided t' try it anyway. Ya scallywag! Ya scallywag! I should have used me better judgment. It be beginnin' t' be quite windy and t' rocket zipped off t' pad and right into t' wind. Avast, me proud beauty! At this point it be more like an artillery round than a rocket. Arrr! As it was descendin' I thought that t' parachute would be deployed but alas it hit t' ground like a lawn dart. Upon recovery I was surprised t' find that t' only thin' really damaged was t' nose cone. Blimey! Since thar was so much space betwixt t' nose cone tip and t' cap o' t' Pringles can, ya bilge rat, it softened t' impact. Blimey! T' booster section o' t' rocket just flew off t' t' side with very minor damage. In order for it t' fly again I just need t' get another Pringles lid, snow cone cup, ya bilge rat, and nose weight and I'll be good t' go.