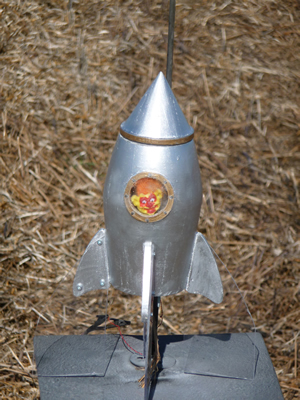 Brief:
When I found these rocket-themed birdhouses at Michael's, I couldn't resist. In fact, they were on sale so I couldn't resist three of them. They are about 10" high, 4.25" in diameter that the widest point, and the base is about 3.125". This review is of a sci-fi themed rocket inspired by, and named for, the Raygun Gothic Rocketship that appeared at Burning Man 2009. This one flies on high impulse 24mm motors - the E30 SU, F24 RMS, or F39 RMS.

Construction:
1. Prepping the raw birdhouse: Removed the top (ie the nose cone); drilled a hole in the base for the 24mm motor tube; and realigned 3 of the four fins.

2. Body: Cut a piece of 2.5" Giant Leap phenolic tubing to fit; mounted a short 24mm motor tube using one centering ring; slid this in from the top; epoxied a Kevlar leader in the base next to the motor tube; and added a bolt through the base to provide positive motor retention..

3. Nose cone: Made a shoulder from a sectioned piece of the 2.5" tubing; cut two bulkheads using a hole saw; one bulkhead is abutted to the base of the cone; slipped the shoulder over that; added an eye bolt to the second ring; and used it to cap off the shoulder.

4. Nose weight: I drilled a 1/2" hole through both bulkheads and the cone's base. After assembly was complete, I added nose weight (lead shot and fast dry Gorilla Glue) until the desired static margin was achieved.

5. Fins: The Lexan fins are screwed to the sides of the stock fins. They were hand cut with a Dremel diamond cut-off wheel, stacked and sanded to match.

6. Launch lug: This is half of a First Fire igniter tube mounted between the widest point in the body and one fin. 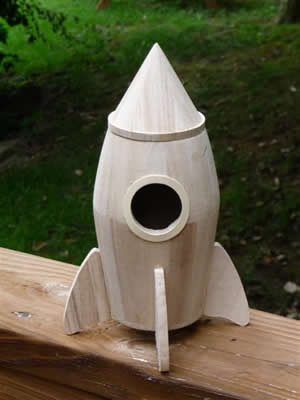 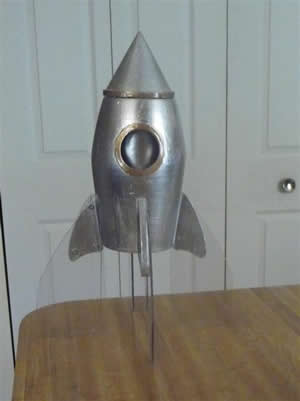 Finishing:
I decided to keep a rough look so I filled only a few deep dings and the rough fin edges. I shot a coat of primer, not to fill the grain but to provide a uniform color base. I then painted the body silver. The ring on the cone and around the open hole are gold. The Raygun Gothic Birdhouse has a Creeple Peeple pilot behind a clear window held on with small nails. The only suitable plastic that I had isn't really that clear, but it is easy to replace later.

Flight:
I built the rocket with the 24/40 case in mind but had decided to try the F35 in the 24/60 case for its maiden flight. Well, there isn't much room in the body and I couldn't pack the 2 chutes around the longer case. So, I prepped an F39-5. I used a car air bag chute protector and two 18" 'chutes so the heavy nose and body can come down separately.

The boost was fine with some weather cocking. Ejection was a little late and the two shock cords tangled. However, both 'chutes opened and it recovered just fine.

Summary:
I think these birdhouses are so cool and like how this rocket turned out. Everyone who saw it took note and liked it too. If I did it again, I'd make the shoulder hollow to provide more room for 'chute(s) and add a 29mm mount. This thing got heavy fast.