Brief:
I admit to some trepidation when I signed up for the EMRR Box O’ Parts contest - I’m very lacking in creative talent, being a mathematical sort. That trepidation only grew as I read forum postings describing the “parts” many participants were contributing. I realized that the contest could very well be described as the “Box O’ Junk” and fervently hoped that I would get some of the higher quality stuff. No plastic toy soldiers or toothbrushes, please!

When my box arrived, it took me a few minutes to build up the courage to open it. Taking a deep breath, I anxiously dumped the parts out onto the floor and began to sort. I was relieved to see a good assortment of body tubes, shock cords, launch lugs, parachutes and streamers. I was not happy with the balsa - small pieces of varying thicknesses, one of which was junk from a die-cut fin sheet. Others were broken fins... It wasn’t looking good! The decals were peel and stick from an Estes Scissors Wing Transport and a water-slide sheet from an unknown plastic model. And of course, I had no idea what to do with the plastic cup, spindle, Easter egg half, and chop sticks. 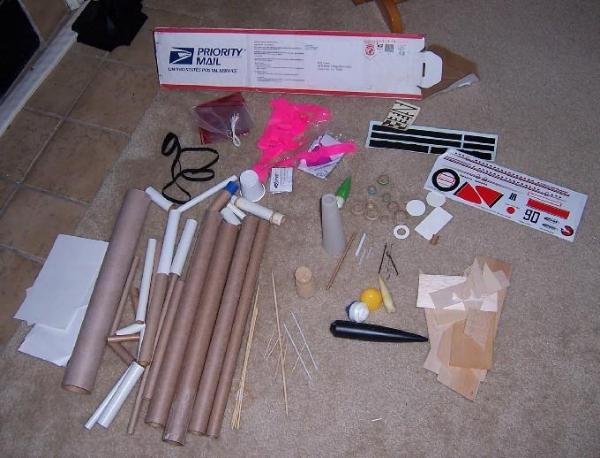 I spent several days test fitting parts, try to come up with a design idea. I really tried to incorporate the Easter egg half and the spindle, but frustration rapidly set in. I could easily come up with a conventional 3 engine cluster - BT-60 adapted down to BT-56 - but that wasn’t going to attract any attention whatsoever. Disgusted at my lack of a creative spark, I put the parts back in the box, where they sat for quite a few weeks.

Reluctant to give up, I pulled out the parts once again in early June. There was an unusually squat conical nose cone that seemed similar to the one atop the Estes Mars Lander. A design idea flashed into my mind - I would build a clustered rocket that looked like a lander. Quickly listing the available parts, I set to work in Rocksim. The design came together quickly, with the most difficult tasks being the color scheme and a name. Since I was salvaging something out of this box of junk, and as I planned on using the 90 from the Estes Scissors Wing decal, I christened my creation Salvage 90.

1) Cut all body tubes to the lengths specified in the parts list (Tip: Use a coupler or empty engine case as a mandrell and wrap a strip of card stock around the tube to serve as a guide).

3) Place 2 marks, one 1” from the bottom of the motor tube and the other 0.75” from the top. Use the wrapper in the PDF file to mark off 3 10 mm wide strips, spaced at 120 degree intervals. (Tip: If you use a Windows machine, you can generate your own wrappers and alignment guides using the VCP program, available at http://v-serv.com/vcp/. Does much, much more than print patterns too!)

4) Dab glue around the motor tube at the 2 marks made in step 3), taking care not to get any in the 10 mm strips, as the centering rings will later be removed from these areas. Slide the centering rings into position and set the assembly aside to dry - thoroughly.

5) While the motor assembly glue is drying, cut out 3 fins and the launch lug stand-off from the balsa sheet, making sure that the balsa grain runs parallel to the leading edges. Use sandpaper to make sure the fins are the same size, and leave the edges square (Tip: I use copy and paste in a paint program to print the patterns - 1 for each fin - onto a sheet of paper, which I then tack onto the balsa using 3M Spay Mount. After the fins have been cut out, the paper is then easily peeled off; see the picture in the PDF file).

7) Punch out the central holes of the BT-5 to BT-60 centering rings, and set these aside for later. Glue two of the rings together to form a thick ring. Now use a dowel or other long object to smear glue inside the payload section at the top of the 4” BT-60. Using a BT-55 or other tube, push the thick BT-5 to BT-60 centering ring until it presses against the end of the 4” coupler. This thick ring will prevent the ejection gas from escaping the payload section.

9) After the glue on the motor assembly has dried, use a hobby knife to CAREFULLY cut away the parts of the centering rings over the 10 mm strips. Then glue the 3 BT-5 tubes into these notches, their bottoms should be flush with the bottom of the motor tube. Make sure the tubes are straight and properly aligned! Allow to dry.

11) Using the PDF pattern, mark 3 12 mm 7.625” inch long strips starting at one end (the bottom) of BT-56. Mark lines for placing the fins exactly midway between the strips.

12) Cut out the strips you marked in step 11) using a sharp knife. I used 4 BT-60 couplers as a mandrell and a piece of aluminum angle iron to help get a good cut.

13) Test fit the motor assembly by sliding it into the Bt-56, aligning the 13 mm with the slots. Remove the assembly and place glue on the motor tube centering rings and the slot edges. Slide the motor assembly back into the BT-56, making sure that the BT-56 is firmly nested against the centering rings and the side of the BT-5’s. The tops of the BT5’s should be flush against the tops of the slots.

15) Glue the shock cord into the top of the 10” payload tube (the side opposite the 4” coupler) using the standard Estes paper trifold mount.

16) After the fillets have dried, glue the 3 fins onto the BT-56, midway between the BT-5 tubes. Use your “calibrated eyeball” to make sure they are vertical, with a 120 degree angle between the fins. After the glue dries, apple generous fillets.

17) Glue the launch lug to the stand-off. Once this has dried a bit, glue the lug and stand-off next to one of the BT-5 tubes, 0.5” from the top. make sure that the lug is vertical, and that the rod will clear the adjacent fin.

18) Glue the 4 3.625”x 0.25” balsa strips evenly around the top of the BT-56, flush with the top. Make sure that the strips are vertical and that they are at 90 degree angles with each other. At this point the assembly looks like the picture below: 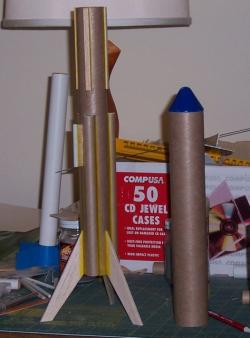 20) Tie the shock cord to the nose cone. Assembly is now complete.

I applied seven coats of AeroGloss sanding sealer to the fins to seal the balsa and achieve that “smooth as glass” finish. The body tube spirals were filled with thinned Elmer’s Fill N Finish, which was sanded with 240 grit sandpaper once dry. This was followed with 3 coats of Krylon primer, sanding with 400 grit in between, and 2 coats of Krylon Glossy White. After masking with Tamiya masking tape, the fins and nose cone were painted with Krylon Banner Red, and the BT-5 outboards with Krylon Metallic Bright Silver.

I applied the logo, number 90, and window decals from the Scissor Wing Transport peel and stick decal sheet; the window strips have to be trimmed to 5.25” in length.

Flight:
July 5 was the day, despite rain showers in the area. I prepped the rocket indoors, loaded my duffel bag with the launch gear, and made my way through the hot, muggy Huntsville weather to the field adjoining my apartment complex.The wind being out of the Southwest, I set up the pad in the SW corner to allow for anticipated drift; I also reefed the 18” chute a bit to speed up the descent. The pad was then assembled, the launch controller wires unwound, and the battery unpacked. The weather was still holding, so I placed the rocket on the pad and hooked up the clip whip to the ignitors.

After taking the obligatory pre-launch shot, I connected the battery to the controller, and checked continuity. No planes were visible, so I commenced the countdown.

Salvage 90 seemed to leap off the pad - the combined power of the 3 A10’s and the C11 got this puppy moving in a hurry! To my great satisfaction, all 4 engines lit, resulting in a straight-as-an-arrow flight. As usual, Rocksim had overestimated the alitude performance; the rocket fell considerably short of the 900+ feet that was calculated. I estimate it was more like 600-700’, no more than 700’. Ejection was just passed apogee, and I was relieved to see the purple and white Estes chute open. Successful on its maiden flight, Salvage 90 descended back to Terra Firma.

However, reefing the parachute turned out to be a mistake, as the rocket landed with one of its fins hitting ground first, and the combination of weight (4 spent motors) and impact speed resulted in one fin cracking. Repairable, but it put the kabosh on any additional flights; the clouds were moving in, and it seemed that the rain would set in before the glue could dry.

I was happy - the design worked beautifully, and I could now submit my entry into the Box O’ parts contest. All in all, a great day!