Brief:
When I discovered JimZ's plan page in early 2001, one of the first old rockets that I looked for with hopes of somehow recreating it was the Estes Satellite Interceptor. An original S.I. had been one of my favorites from my early fleet but had been one of the rockets that I never managed to fly due to lack of a flying partner. Unfortunately a 2001 sweep of the local toy and hobby shops made me realize that many, if not all, of the late 70's era kits I was interested in building were no longer available except with a second mortgage. As I delved deeper into the online arm of the hobby and discovered David O'Nan's S.I. review on EMRR, I began to get a clearer picture of how some kits could be donors for the parts needed to clone a completely different bird, and shifted my attention to eBay with hopes of landing an Estes Wildfire as a parts vehicle. I eventually won a Wildfire but not before purchasing an assortment of body tubes and nose cones from Hobbylinc, a stash that included the BT-55BB nose cone used in the Black Brant. The Black Brant cone wasn't a perfect match, but it was close enough for my tastes and with it in hand I jumped blindly into my first upscale project. I had several impressive flights with the D-powered S.I. over the next few years, but it was mortally injured in a tragic garage accident, which led me to the current E-powered version. 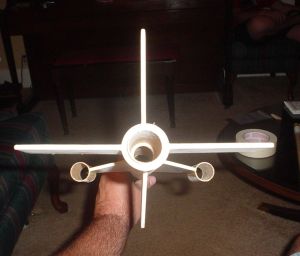 Even though it was my first attempt at an upscale, the Satellite Interceptor turned out looking great. It has been mistaken on several occasions for the BT-60 based Estes S.W.A.T., but more often than not it just gets a puzzled "seen that before, but I don't remember it being that big" look. The BT-50 to BT-55 upscale works out to roughly a 1.8x upscale, and I was able to reproduce the correct scale fin patterns by making 180% copies of the originals at work. One benefit to building this the second time was that I was able to learn from the mistakes I made on the original. Back then I had made the mistake of trying to round off the leading edges and taper the trailing edges of the fins. The combination of the comparatively thick 1/8" balsa with a taper didn't look good when I attached the wood dowels later, so on version two I just left them squared off. (I figured that I wouldn't need the added aerodynamics anyway with the E engine.) Version one also dated from the days before I had discovered the wonders that thinned Elmer's Fill 'n' Finish worked when used to hide balsa grain and tube spirals, so the new version turned out looking a lot nicer than the original. I also built the second one with the correct fin orientation. (I lined up the wings and the rear fins in version one. It flew okay but looked a little off.) I also incorporated several other upgrades into the second version, tying a 36" length of Kevlar thread in behind the forward centering ring and using piece of Kevlar Perma-Wadding to negate the S.I.'s dependence on dog barf. Aside from these changes and the engine upgrade the two birds were identical. 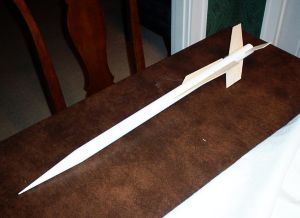 Finishing:
Painting rarely gets easier than with a Satellite Interceptor. Gloss white all over. That's my kind of bird. The decals are what really make this rocket and as of yet I haven't been able to get a set to scale out correctly on my computer, but I have hopes of getting the right program for Christmas.

Flight:
While differing considerably in available power, both my D and E powered versions of the Satellite Interceptor provided me with incredible first flights. My D version S.I. was the first D-powered rocket that I ever flew in April of 2001. With my in-laws camped out at Big Bone Lick State Park over Easter weekend, my brother in law Tony and I decided to put the large front lawn to use as a launch field. We had successfully flown an assortment of rockets from Mosquitos to Wizards to Astro-Cams in the light breeze, but as we were cleaning up and preparing to leave, Tony mentioned how much he was looking forward to seeing my big S.I. fly. I was hesitant at first, but Tony insisted on trotting out the "God hates a coward," mantra that I had occasionally espoused and reversing it on me. Realizing that my big mouth had once again been writing checks that badly stretched my account, I had little choice but to pony up and I loaded the S.I. with an ill-chosen D12-3. 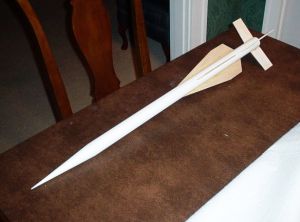 As I said before, this was my first ever D flight, so I was unsure what to expect at ignition. The speed with which the S.I. left the pad was a big shock and I watched in delight as the rocket arced into the breeze and traveled out over the road in front of the park. It was still traveling rapidly upward when the ejection charge fired, and for a moment I thought that all was lost due to the violence with which the rocket stopped. To my surprise, the chute had unfurled despite being hung up on the rear dowels, causing the rocket to descend more swiftly than normal (and in true Centuri Super Kit fashion, parallel to the ground.) Unfortunately it also seemed to be heading for the trees that ringed the field or the creek beyond them. The kids all scattered and chased after it, but Tony and I just stood and watched the course that we knew we had no power to change. It scraped through the upper branches of one of the taller trees, somehow managing not to snag the parachute despite deflating it. From about the 100' mark it was in free fall through the bare branches, and appeared to be on a potentially ruinous collision course with the creek, but at the last possible second a rogue branch snagged the shroud lines and stopped it fifteen feet short of a certain bath. It was suspended just at the edge of the deep-set creek, just inches out of my reach. Tony, who is about 6' 2" to my 5' 11", was able to reach it and haul it to safety. It had several deep scratches on the balsa fins and a broken shroud line from it's trip through the trees, but other than that it was undamaged. I managed four more flights with it, including one at NARAM 43, before it was destroyed in the garage accident. 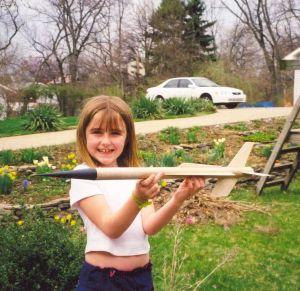 Version two made it's flight debut at a Quark section launch in July of 2004. Loaded with a E9-6 the S.I. arced over the flight line into the breeze to an impressive altitude before ejecting the chute just as it's forward momentum seemed to stop. From there it rode the breeze almost to the edge of the field, a recovery walk that almost killed me. Everyone agreed that the flight had been impressive and after resting for a spell, I loaded it up for a second flight, a carbon copy of the first flight except for a much shorter recovery walk. Pumped by my success, I was looking forward to the next flight a month and a half later and made it my leadoff flight for the day. The flight was an unfortunate harbinger of how the rest of the day would go for me as the nose cone separated at ejection after another impressive flight. The rocket fell in three pieces, nose cone, Perma Wadding and body tube, but somehow managed to land within twenty feet of each other. One of the rear fins broke off on impact and the Perma Wadding disappeared in the heavy brush, but the damage was relatively minor. Remounting the Kevlar® will be something of a problem, but it will fly again in 2005.

Summary:
I originally began this project because of the unavailability of the nose cone for the 1:1 clone, but since Estes has seen fit to reintroduce it in the Sky Writer kit, cloning a 1:1 Satellite Interceptor is once again no problem. (Unless you REALLY have to have the display only tail cone.) The nice thing about the BT-55 based version is the way it handles the extra power (and also that you have another choice for a mid-power bird.) Plenty of PROs in this project, but only one CON: After three years I still haven't figured out a way to upscale a decal scan. Man, that's pitiful. They should take away my computer.