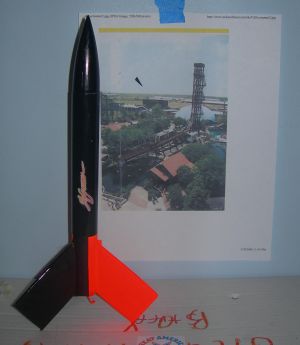 Brief:
The SkyScreamer is a scratchbuilt rocket made from an Estes Phoenix motor mount. The name comes from an amusement ride that operated at Six Flags Astroworld in Houston, Texas. The rocket is basically a downscale Estes Der Red Max with full-sized Der Red Max fins.

Construction:
SkyScreamer actually started life as a motor mount for my Estes Phoenix. It is a combination of scrap from my spare parts box. The parts are:

Constructing this mini-bird was very easy. First, I removed all of the old parts that made it a motor mount. The slot for the engine hook was filled in with Elmer's Fill n' Finish, the remains of the centering rings were sanded down to nothing, and the engine block was pulled out. I ripped the motor mount out of an A.R.V. Condor that I had messed up on construction. Next, I cut out the fins from a sheet of model airplane quality balsa wood. A considerable amount of this rocket's inspiration came from the Estes Der Red Max, so I gave it oversized Der Red Max-style fins. Lastly, the shock cord was attached and the streamer was attached. It was then ready to finish.

Finishing:
The finish on SkyScreamer is very different from other rockets I've built. The black is not paint, it is actually tape used for model airplanes. It went on very nicely and if applied without any air bubbles, it makes an excellent finish. I only covered to about 1/4" of an inch from the top of the fins. Two of the fins were covered also. The rest that I did not tape was painted Racing Orange, which is a florescent color. The idea was to be able to spot it in the air and on the ground easily.

For the decal, I found the old logo to the SkyScreamer ride that was at Astroworld and printed it onto OfficeMax bumper sticker paper and carefully cut it out and stuck it on the side. The finished rocket looks very impressive. 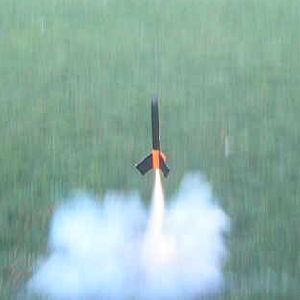 Flight:
SkyScreamer has flown only once. The motor used was an A8-3. I used 5 sheets of wadding and loaded it like a typical rocket. The rocket shot straight into the air to about 200 feet.

Recovery:
The recovery system was a 50" streamer, which was a major mistake because it came in like a rock and popped a fin off. It can be easily repaired though. I now use a 12" parachute with a spill hole.

Summary:
This was a simple rocket made from junk that can probably be used as a parachute duration rocket if modified slightly.