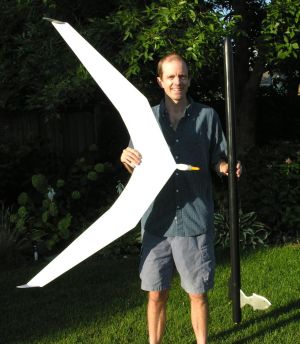 Brief:
The Albatross is my biggest and most ambitious boost glider project to date. It took nearly 10 months to complete. With a wingspan just shy of 4 feet and weighing exactly 1 pound, this glider casts a huge shadow over the earth below. An 11oz BT-70 boost pod for 29mm motors carries the bird skyward.

Construction:
The glider was built first from 1/4" balsa. Each wing portion was sanded to a full airfoil profile. The wings were glued together before I began the body portion of the bird. To build the body, I first glued together several slabs of 1/4" balsa, cut in the rough shape desired. This included a sturdy mounting bracket on the underside of the body. The body/head/mounting assembly was then sanded to get the albatross shape. I couldn't attach the head to the wing until I knew more about the glide characteristics of the design.

It was time to trim the glider. I temporarily fastened the head assembly to the wing with some rubber bands and a wooden spoon. Using some free online software (MS Excel-based "Sailplane Calc" spreadsheet by Curtis Suter), I calculated the target CG of the glider. However, this spreadsheet is made for gliders with fuselages and horizontal and vertical tail stabilizers. Mine was basically a flying wing with a bird head. For what it's worth, the program said that the neutral point was 11.9" back from leading wing edge, almost exactly at the canting point (which is 16.1deg). This was astonishingly far forward. I wasn't even sure it could be achieved.

Using my Dremel, I hollowed out my gorgeous bird head, carving a huge hole in it. Every bit of possible space was needed in this cavity. Into the hole I put a quarter pound of lead, then sealed the hole with epoxy and wood filler. Then I glued the head to the wing at the position needed to achieve the correct CG.

On a breezy afternoon, I took the glider up to my test field and gave it about 20 tosses. I got a few decent glides but was worried about roll stability. I also needed to induce circling. Back in the basement, I embedded a washer in one wing tip to encourage turning then filled and smoothed over the top of this. Returning to the park, I tried some more test tosses, and that's when disaster struck. On a bad toss, she crashed hard and was pretty much demolished. In disgust, I set the debris aside. 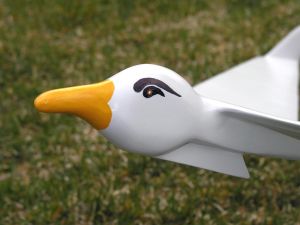 Then in early 2007, I read that the EMRR Challenge involved boost gliders and I got to wondering about making a second attempt. I took out the carcass and started rebuilding. After making a new head and scavenging other parts, I fiberglassed the head, shoulders, etc. with several layers of 6oz glass. Of course, these parts are very curved with lots of edges and corners, so the fiberglassing looked absolutely horrible with ragged loose threads, folds, and fabric edges everywhere. I set the project aside again in frustration.

Then when the warm weather of spring came six weeks later, I took it out, slowly sanded it down, inserted head weight again, and made some real progress. This time, I kept the test glides very limited. Nothing was broken during testing, but I didn't have much confidence in the glide. I resolved that this bird would be not be fully tested until its first launch.

Thus, I went ahead and painted the glider. It took a lot of white to cover the massive wingspan. I carefully painted in the eye and the head coloration characteristic of the real birds.

Last weekend---out of the blue---my wife said "Let's take my brother's family launching next week". (Pretty good wife!) Well, I took this as a sign that I had to finish the Albatross.

I had been eyeing NCR's Oktoberfest as the first launch of the Albatross, but I was reluctant to embarrass myself with the spectacular crash I believed was all but certain. To launch it next weekend, I could destroy it with far fewer witnesses!

So, I quickly finished the boost pod. It was BT-70, 29mm, about 4 feet tall. I put the glider bracket on one side. Rail buttons were used for a nice long launch guidance to enable slow takeoffs. I was slightly worried about stability in the axis parallel with the wing because the glider had very little surface area perpendicular to the wings. So I decided to add a fin shaped like a fish. This made it look like the albatross was carrying the fish in its claws. Aside from that, stability wasn't an issue at all because the CG of the glider was so far forward (due to the lead head) that I could make the CG of the whole rocket anywhere I wanted by shifting the vertical placement of the mounting bracket. It is set 4.5" from the tail of the tube, and I added 0.5oz of nose weight to be sure.

The fish was painted silver and the rest of the pod was black. I didn't even have time to clear coat the boost pod. In fact, I was so rushed to make the launch date that when I tried to insert the motor the night before takeoff, I discovered that I had forgotten to put an engine block in the motor tube and my motor retention brackets didn't work because the single-use motor I chose was shaped differently than my 29mm RMS casing. With a quick epoxy job and some bending, both problems were easily fixed. 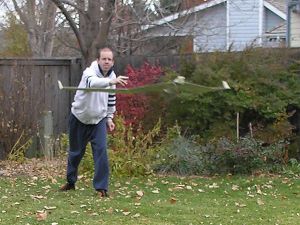 Flight and Recovery:
Because of the rush to launch that weekend, I couldn't order the ideal motor online so I settled for a single-use 29mm F25-6 from a local store. Being of the firm belief that the Albatross would be good for only one flight, I was determined not to miss the takeoff photo. Well, I missed it anyway! But I did get a photo with the rocket on the pad and the motor smoking as it built pressure just an instant before takeoff.

The F25 was a nice choice in terms of power. It yielded a fairly slow liftoff with modest altitude. The glider separated perfectly, slightly before apogee. As I had feared, the 6-sec delay was way too long for the boost pod. It plunged for about 2 or 3 seconds before opening the chute and recovering cleanly.

To my utter amazement, the glider soared easily through the sky, settling in to a series of broad, lazy circles about 700 feet high. Everybody started cheering. After Albatross made about 5 high circles descending gently toward us, I broke out of my astounded daze and began trying to get the glider in the viewfinder for a picture. I just couldn't find it. As I was trying, the cheers turned to gasps. I didn't really see the last part, but my wife and brother-in-law tell me that about 75 feet off the ground, the Albatross turned into a steep spiral and then into a straight nose dive. They say that she hit a crosswind. Apparently the glider had only limited roll stability. It got knocked too far sideways by the crosswind and couldn't recover. It plunged the last 50 feet and lawndarted in the prairie, burying the whole head. 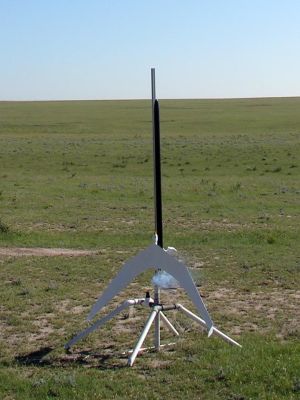 Summary:
My feelings about this are funny. I was utterly convinced that the glider wouldn't fly, so I was emotionally prepared for total destruction. I was deeply satisfied with the 10-month project anyway, which challenged every aspect of design and craftsmanship. But when the Albatross actually flew and circled up high, I was amazed and thrilled. What a fantastic feeling! Those brief moments changed my hopes, and when Albatross crashed I was completely heartbroken.

Where does this leave me? Perhaps I'll rebuild for another attempt. I'm too crushed today to decide so I'll think about it for a while. If I don't rebuild, I have a new opportunity to dream up and build some other exciting giant glider project. For me, the pursuit of something new is usually the most fun so perhaps the Albatross will have to be only a memory now. We'll see.