Brief:
One of my boys has an Estes Skywriter that despite its simplicity flies really well. Actually it almost flies too well, that's why he's on his second rocket since we watched the first fly over the trees at our launch site when he decided to try a C motor. Anyway, since he likes it so much I have thought that it would be neat if I could build one that took D size motors and higher, basically a MPR Skywriter. I took dimensions and drew up a simple dimensioned drawing for myself, then I entered all of these dimensions into Excel and scaled then by various factors based on available tube sizes. I figured that to jump up one motor size, I should jump up one major tube size so since the original is a BT-50, I started with BT-60 and I am still thinking about a 29mm BT-70 or BT-80 version.

Construction:
Most of the parts are easily available, and in fact, I had most of them on hand from various projects and leftovers from the Box O' Parts contest. The nosecone was another story. I don't have a lot of those just lying around and this would be bigger than most anything I had built before. I exchanged emails with Gordon Agnello (aka Sandman) and he quoted me prices for both the BT-60 version as well as the BT-80 version. I decided that for now I was going to stick to the smaller one but maybe Iâ€™ll do the BT-80 over the winter or sometime next year. 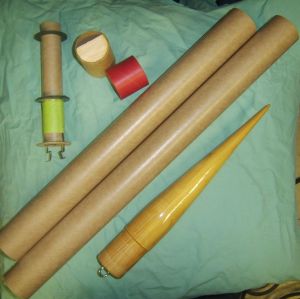 After I received the nosecone I sanded out the few remaining toolmarks on this beautiful piece of wood with 300 grit sandpaper and used a foam brush to lay on three or four coats of spar varnish. I should mention at this point, that when Sandman found out I was building an upscale Skywriter, he offered to make the nosecone out of cedar instead of balsa if I wanted. We both thought that the wood grain on the cedar would work well for the pencil and so that's why I used the spar varnish, both as a waterproofing agent (three coats is usually good for boat parts that spend a lot of time underwater so I should be safe) and to highlight the beautiful wood that Sandman picked out.

I built a FlisKits style baffle from balsa leftover from our build of the FlisKits Whatchamacallit for Cub Scouts and then had trouble getting the baffle into the tube without the glue locking it in place before I had it where I wanted it. I had to tear it apart to get it out once and almost a second time before I just cut the BT and installed it where I wanted it.

Finishing:
I got stuck for a while because my wife can't stand the smell of paint in the house, but I worked several evenings when she was way for the weekend and got it all painted. Finally, I bought a new Skywriter so I could scan the stickers, scaled them up using Irfanview, and printed my own decals. 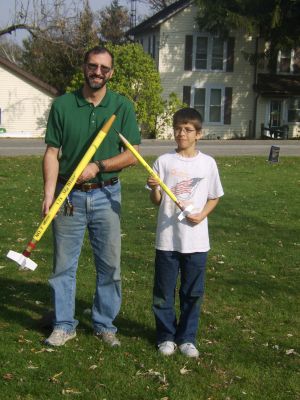 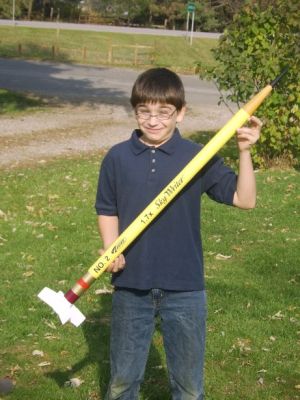 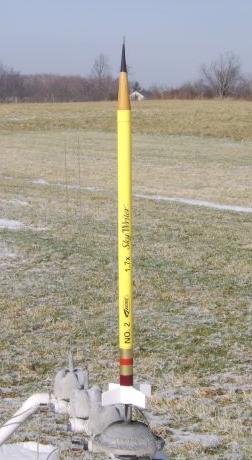 Flights:
The two flights were stable, however, on the second flight the recovery system deployed but detached from mount in internal baffle. Nosecone recovered from tree at far side of field, main body core sampled. Surprisingly little damage. Easily repairable.

Summary:
I was pretty sure that the rocket would be stable since it is so tall and because I used a heavier nosecone, but I wanted to be sure (and get points for the EMRR contest) so I used RockSim to check thing out. Since I had scaled drawings, getting the dimensions into RockSim wasn't too difficult, however, it took a few tries to get the fins to look like I wanted them since I was a little unfamiliar with some of the terminology used. Overall, it went well and the simulations seemed to indicate no apparent problems. My only real difficulty is getting things done before my 30-day trial expires since by budget just will not support spending a hundred bucks for this yet.