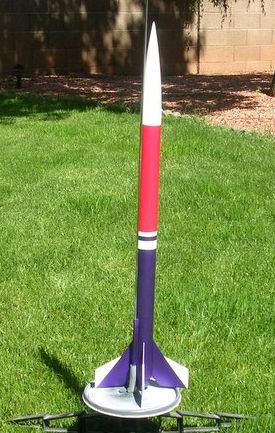 The components in this SLS series kit are even better than Semroc's regular line. The body tube was extra thick to hold up to the thrust of higher impulse 29mm motors and had an extremely smooth wrap. The nose cone was nicely shaped high quality balsa and finished nicely. The basswood fins were also from the highest quality fine grain wood. The rip stop nylon parachute and lines came fully assembled and looked to be more than up to the task. 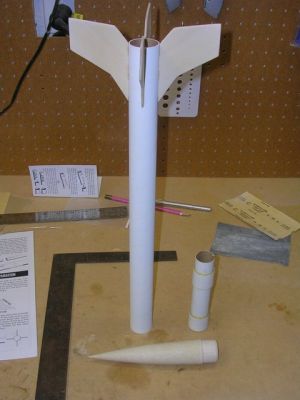 The instruction booklet was typical Semroc high quality with illustrations for every step, easy to follow written instructions, and a logical order. One thing to watch for and is cautioned against in the instructions, is to be quick pulling out the 24mm motor mount after using it to position the 29mm thrust ring. Fin alignment was a no brainer since the body tube was pre-slotted at the factory with clean laser cuts, which allowed the laser cut fins with their tabs to fit right in using a through the wall construction method. Also, I chose to glue the 24mm mount in permanently since I don't plan on launching it with 29mm motors. When everything was together, I was supremely impressed with the quality of the kit. Components exceeded my expectations and the resulting rocket is very sturdy.

Finishing:
Due to the high quality of the components, finishing was a snap. The standard method of watered down Elmers Fill 'n' Finish smoothed out body tube spirals, the nose cone, and the basswood fins. Several coats of filler, sanding, and primer left a super smooth base for painting. I chose to finish mine with a white base coat, plum pearl, red pearl, and finally, two coats of clear gloss urethane.

Flight:
The first three flights were all on Estes C11-5s. Ejection was just past apogee with the NC down. They were perhaps just a little long on the delay, but a C11-3 would likely be too short. All three flights were arrow straight and with zero spin. I used several sheets of standard wadding and motor retention on the 24mm mount is by motor clip to keep prep time to a minimum. The Semroc estimated altitude on the C11 is 550ft, which is accurate and maybe a little conservative. If a 29mm motor is used, retention is by friction fit as this is a minimum diameter 29mm rocket.

Recovery:
The recovery system consisted of Kevlar® tied to the thrust ring and then extra wide elastic after that. I made the addition of a snap swivel on the parachute, allowing the chute to be easily stored outside of the rocket. The second flight resulted in a ding on the nose cone, so a longer shock cord would probably be a good idea. On the third flight, however, disaster struck. When the ejection charge fired, the nose cone and parachute separated from the rocket, drifted out of range, and the remainder of the rocket came down as a ballistic core sample. Upon further examination of the recovered pieces, the shock cord seemed to still be attached to the body tube but was in a giant knot right where it tied to the Kevlar® thread, which resulted in a very short shock cord with no shock absorption. Thus, I concluded that the ejection charge and deployment forces were too much for the elastic to take and it tore right where it was tied to the nose cone. This is likely no fault of the kit or components. Evidently I need to pay closer attention when prepping the rocket that the shock cord is not tangled in any way.

Summary:
I loved this kit. It rates a five overall for the super high quality components, ease of construction, versatility, and number of motor options. The only cons are that I didn't get to launch it on a D or E, and that I have to build another one. Those who have eagle eyes might be brave enough to try it on the F25 although I imagine it would be hard to see a 23" long rocket at over 4,000 ft (according to Semroc estimates). No matter what color it was, it would be one exciting launch though.