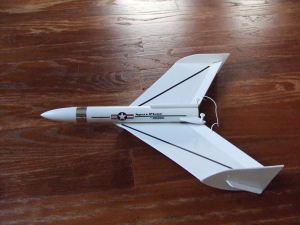 Brief:
Semroc had released a series of "cc:" (carbon copy) kits a few years ago that were essentially bags of parts to clone an Estes or Centuri classic, but with no directions, instead pointing the modeler to reference sites that archive the original instructions online. While this was generally a well-received product niche, the cc:'s were discontinued in 2007 due to occasional customer confusion over lack of instructions.

Fast forward to 2008--Semroc has brought back the bag o' parts concept as xKits, and now offers them only online, hoping that if you're on the ball enough to get through an online shopping cart process, you can probably figure out how to pull up online instructions from Jim Z's site.

The Space Plane was originally sold in 1961 as the first mass-produced boost glider kit, Estes number K-3. It features some somewhat complex aspects to achieve the transition from boost to glide--spin tabs for rotational stability, and elevons locked in horizontal trim by the motor, which spits out enabling them to spring upward.

Building was somewhat challenging although you are aided a good bit by the laser-cut parts. I would rate this in the neighborhood of a 3 on the 5 scale of complexity, due to some of the challenges with fit/alignment and trim. My total build time was just under two hours, plus finishing. 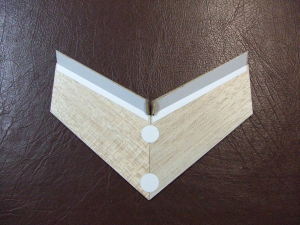 Construction begins with the fuselage (body tube). You'll need to print out the marking guide form the original instructions, which is then used to draw lines for the wings, launch lug and control tabs, plus to cut out the aft section which later serves as vertical stops/limiters for the elevons. You then glue in the balsa bulkhead and "attach" the nose cone, but I found two things worth tweaking here. First, given today's hot ejection charges, treating the aft end of the bulkhead is an absolute must. I used a thin layer of epoxy. Second, you should not "attach" the nose cone with any semi-permanent glue yet, as the thing has not been trimmed and nose weight will be needed later.

Next comes assembly of the wings and elevons. The wings are initially held together by a pair of tape disks. Pay careful attention to the orientation, as the laser-cut parts even have tiny laser-scratched location semi-circles on each wing half for use in placing the tape disks. With the wing halves tacked together (no glue yet!), the elevons are then taped in place at the trailing edges. The tape strips provided is very high tack and rugged--I was impressed. As long as you don't have any balsa dust on the surface you're bonding to, the tape hinges should prove to be very durable. 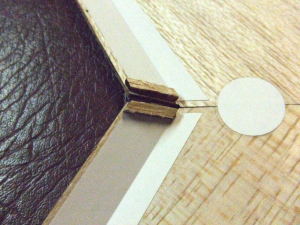 I'll admit I was a bit confused by the next step, which was bonding and trimming tiny elevon stops. The instructions show a part that starts out as a rectangular balsa strip, which is then sanded to an almost fin-shaped pattern, stressing that the 3/32" width of the balsa stock must be used as the height of the finished piece. The laser-cut parts were trapezoid shaped and using the 3/32" height would have made the shape irrelevant. Once I started dry-fitting, though, I realized that the trapezoid was designed to match the top/interior surfaces of the elevons, and that no sanding was needed--they simply act as small wedges to form a tight fit once a motor's inserted. A SLIGHT taper might help make for an easy ejection/transition. See close-up photo for how these look once bonded. 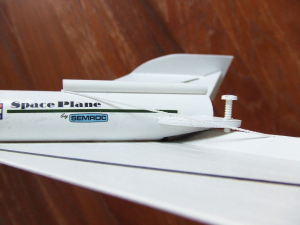 The wing dihedral is achieved very simply--the flexible, taped-together assembly gets a generous bead of glue to the top surface (with the tape disks), and this is then placed upside-down on the body tube with the wing tips resting flat on the table surface. Allowing for overnight drying, I then added the stabilizers and spin tabs on the wing ends (pay careful attention to the positioning of the spin tabs--also supported by laser-etched lines on the balsa parts).

The last aspects of construction are to bond the elevon locking plates to the bottom (keeps them from getting pushed below horizontal/causing a nose-down dive), the launch lug, and the mounting plates for the nylon trim screws. The trim plates were hard 3/32 balsa, but Semroc still suggests reinforcing with a coat of CA. This is a good idea although in my case the holes were slightly undersized and reinforcing with CA should have been done after opening them up, not before.

An elastic cord is then attached from the elevons up around the launch lug, pulling the elevons up whenever they're free to float (e.g., after motor ejects). The nylon screws can then be turned to adjust the amount of angle for each elevon, which helps create lift as well as introduce a turn for easier recovery. In my case, I needed to use most of the provided nose weight and then a fair amount of up elevon for a good hand glide, and the glide was very fast. 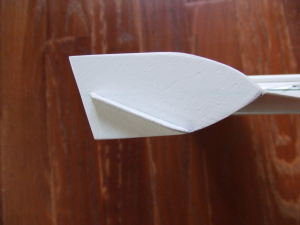 Finishing:
Normally gliders are best left unfinished other than basic moisture protection such as thinned dope, but in this case, given that it's not exactly a competition/performance model and that it came with nice decals, I decided to give it a very light white primer coat followed by two light coats of gloss white. I did not bother filling grains, as that would have just added weight, but I did sand everything down with 320 grit sandpaper before painting, and made sure to round the leading and trailing edges as well.

I finished up by applying the waterslide decals, which were typical Semroc quality--fairly durable, very easy to work with, and go on smoothly. I think they really help nail the appearance of this model. 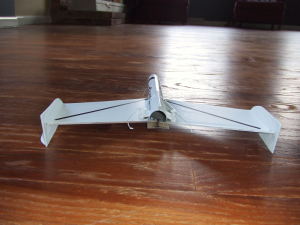 Flight:
Having some interesting experiences lately with "retro" glider-like rockets, I decided to go very low-risk and cautious with this. First, I hand-tossed it several times (without motor, and nose cone taped in place). I was still getting the decent but fast glides I'd had from post-construction testing.

I then loaded up a 1/2A6-2. For some reason, the recommended motors jump from 1/2A6-2 over A8-3 directly to B4-2 and B6-2. The only reason for this I can think of (other than typo) would be that maybe the -3 delay of an A8 is too long, as you would not want to eject this with the nose pointed down--the kick would amplify the dive.

The boost was fine--only got about 80 feet, but was exactly as planned. It rolled maybe twice on the way up, so the spin tabs did their job without imposing too much of a drag penalty.

Recovery:
The ejection spit the motor as designed, allowing the elevons to spring up and provide some lift. It took a good second or so for the transition into glide to settle, but when it did, I witnessed a pretty good glide. It was still fast, but trimmed right and had a little bit of a right turn bias to avoid sailing away. It was not enough to penetrate the 8 mph winds though, so it got knocked around a little bit.

Overall, it was a perfectly fine glide, and I'm looking forward to sending it back up on a full B. I just have to wait for a less windy day.

Summary:
I'm sold on this one--it's a bit complex, but if you read and follow the directions, the precision-made parts should work out just fine and you'll have a pretty good glider. Not exactly a competition model, but very good sport flier and the fact that I can send it up on 1/2A6s even on windy days is nice.