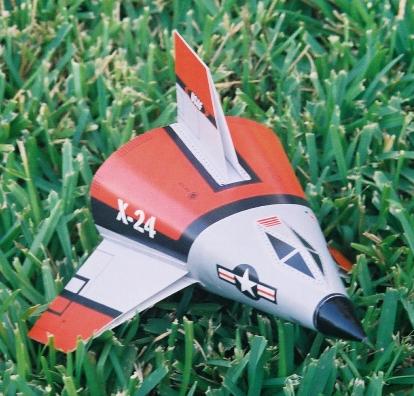 The X-24 Bug comes packaged in the traditional clear bag with a header card. The packaging looks very professional and this kit wouldn't look out of place in any hobby shop displayed along side Estes or Quest kits.

I like that the printed sheets are flat in the bag instead of rolled up. It saves a step of having to flatten them out before starting assembly.

The instructions are clear and concise with lots of detail and have a good assembly order. In fact, there may be a little too much detail, one step actually reminds you to get up and wash your hands. If I didn't know better, I would think they got my mom to write that step.

The kit is a fairly straightforward build but isn't your traditional rocket kit. Probably the hardest part is to form the cone that becomes the body. It took me a couple of tries to get things lined up just right. The instructions have you tape the seam together before gluing and this seems like a good idea. This is where I encountered the only fit problem in the kit. When I glued the seam, it turns out that one side of the seam is about 1/32" longer than the other. It was easily trimmed even with a hobby knife.

Since the body and fins are made from printed sheets, the only part that needed painting was the balsa nose cone.

The final step is flight trimming. A block of clay is included to make a tail weight. It takes several tries to get the model balanced correctly. When you hand launch it for the glide tests, it only glides about 15 feet so you don't get much observation time per glide. It probably took me half an hour of gliding and adding / subtracting clay to get it to glide well.

The Bug glides down after the engine is thrown out by the ejection charge. All my flights took place on a day with a very gentle breeze.

My first flight used a B6-2. The rocket went pretty much straight up, just nosing into the wind a little. The ejection charge fired while the nose was still pointed up. The Bug did a cool backflip rotating 270 degrees into a nice level glide. Considering it's shape and short wings its glide was much better than I was expecting. It landed just a few yards from the launch pad with no damage.

The next 2 flights were on C6-3's. The longer delay lets the Bug nose down a little before ejecting the engine. Both flights were successful with the Bug gliding down in a large spiral.

After 3 flights, the Bug shows no signs of damage or wear. The only evidence that it has ever been flown is a little soot inside the body.

Overall I have to give this kit a rating of 5 . While it will never set any altitude or duration records, it flies surprisingly well and seems to be more durable than it looks. If I could change anything about this kit it would be to have a black plastic nose cone. Then no painting would be needed to finish the model.