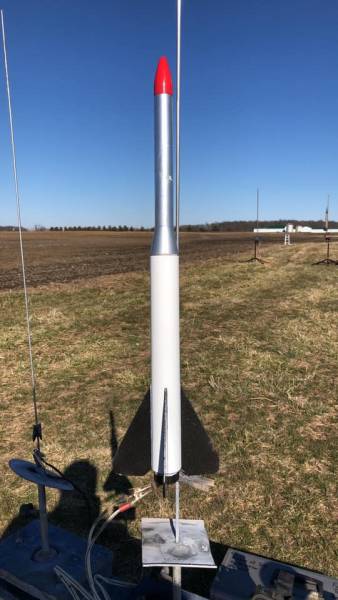 Another of my late night cruises through old catalogs, the RDC Starflite actually gave me the choice of two different designs to pick from, the Starflite and Starflite II.  The difference was the fin pattern, and I chose to go with the early version.  What caught my eye was the mention of the name Enerjet and the potential for 3000 to 4000 foot flights.

As no actual plans are available for this rocket, I had to use my smarts and savvy to figure things out.  Despite my almost complete lack of smarts and savvy, the finished product turned out pretty well.  The catalog picture that I was working from made it difficult for me to determine if it was a 3fnc or 4fnc rocket, so I chose four.  Apparently I was the only one who saw this as a possibility, as everyone else saw three.  I'm not bitter.  I scaled the pic up using the copier until I was able to get a workable pattern.  Parts were ordered from eRockets, and as usual, the most difficult part of the project was waiting a whole day for the package to arrive.

Finishing followed the template of my well used Estes Astron Avenger, for no other reason than I always liked how it turned out.  The red nose cone was painted with a can of Valspar Red that has been in my basement forever.  The transition and payload section were first painted gloss black, then AMC Silver, a can I got on clearance at Hobby Lobby.  The fins were sprayed with Rustoleum Black Night Metallic, the masked and the main body was painted gloss white.  I had plans for a wrap decal at the top by the transition, but as yet nothing has caught my eye. 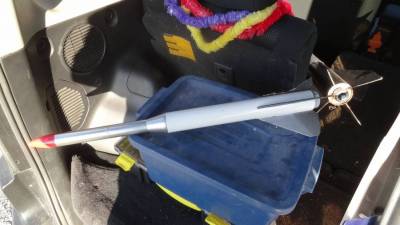 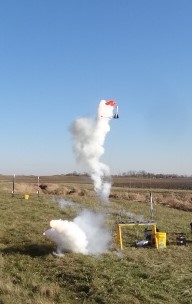 All flights for the Starflite came at the Wright Stuff Rocketeers cornfield near Cedarville, Ohio.  The first one was memorable.  I have legendarily bad luck with Estes E9 motors, so when I'm announced at the pad and an E9 is mentioned, everyone stops what they're doing and waits for the oncoming train.  For this flight I most certainly didn't disappoint.  The load was an E9-8 and when the button was pressed, the explosion was immediate.  Despite the smoke and fire, damage was minimal, and the pictures were fairly spectacular.  Damage was quickly fixed when I got home, so much so that it was ready to fly again two weeks after the CATO.

Flight #2 would be on an E9-6, because I was out of the E9-8s and couldn't find any more locally.  Once again, everyone crowded the flightline to see the next big E9 fireworks show, but this time they left disappointed.  The Starfire left the pad as though exorcising the demons of the previous flight, and then some.  There was windcocking, but the flight looked to be about perfect to around 1200'.  The rocket was just tipping over when the ejection charge fired and everything began coming back to earth beneath the red nylon chute.  Everything except for the piece that flashed and glittered in the sun on the way down.  Recovery was deep in the corn, and there was where I found that the flash and glitter were caused by one of the fins that was no longer with the rocket.  Apparently the ejection charge caused a rebound and the fin got in the way of the payload section.  There was no sign of the splintered fin, so the Starflite went into the repair pile, where it would stay for a couple of years.

Flight #3 would not happen until early 2020, right before spring turned on us and made flying in groups a (hopefully) temporary thing of the past.  I'd fixed the damage from the previous flight after Christmas when I found it in the shop and realized that it had yet to have a successful flight with it.  Since I was in repair mode anyway, I put it in the queue with an eye toward an eventual launch in the cornfield.  With E9s off the shelves and rapidly dwindling in my motor stash, I opted for one of the new E12 motors.  Clichés aside, the third time was the charm for this bird.  The E12-6 was flawless, disappointing the crowds that gathered to watch me detonate another E motor.  The flight was fairly straight with only light windcocking, topping out around 1200'.  Ejection occurred as it was still pointing up, but not moving aggressively, and there was no rebound from the nose and payload section like the previous flight.  The Starfire crossed back over the flightline and recovered a few hundred feet into the beanfield.

Recovery has thus far been handled capably by a 15" nylon chute, slightly scorched by the CATO, but still performing at a high level.

Pros: 3 or 4FNC, this is a sharp looking bird.  And tough.  I may make a 3FNC version of the main body as well as a 29mm version just to cover the waterfront.

Cons: Every E9 is an adventure. 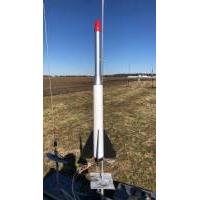 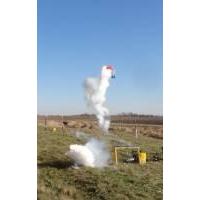 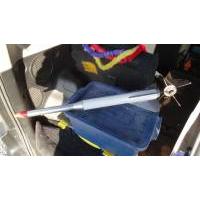