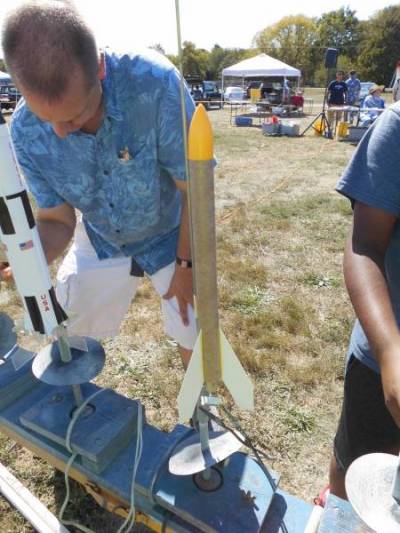 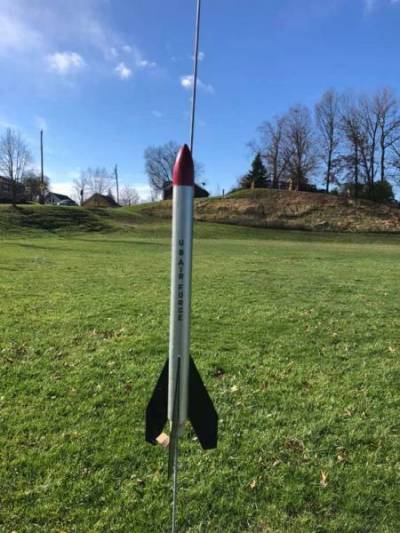 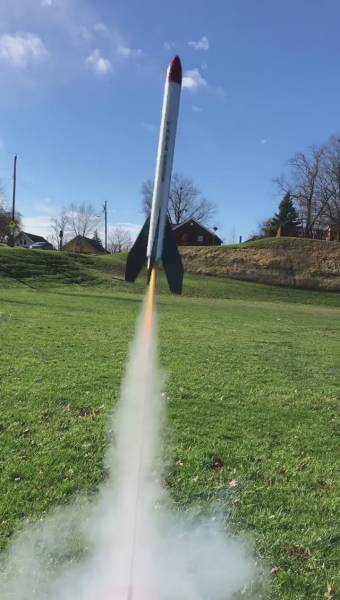 Everyone has seen this kit at one time or another, and maybe even considered buying one.  I actually pulled the trigger.  Pitsco is an educational supplier that produces two different solid fuel rocket kits, this one, and another that is a more complicated build that involves making your own body tube.  What I got was an unimpressive collection of pieces that produced a rocket that was something like an Estes Mini Bertha.  What I wound up with was a credible rocket that surprised me by looking and performing much better than I ever expected.

As beginner's kits go, this one is a step above the semi RTF kits that show up in starter sets.  Or a step below.  Not sure where the cardboard fin stock rates in the skill lever tier, but since Centuri made hay with it for years I'm going to say a step up.  3fnc construction was accomplished with wood glue.  I added Kevlar to the recovery system because it's what I do.

Since the fins are cardstock, the amount of tube spiral killing you'll need to do is a personal choice.  I went with a double round of primer with sanding in between.  The spirals weren't very visible anyway.  From there I painted the nose cone metallic red and sprayed the whole body gloss black, then silver.  The body tube was then masked off and the fins were again sprayed gloss black.  I felt like I had to do it this way because I had doubts about the fins standing up to masking tape.  I added a US AIR FORCE decal from a generic decal sheet that I'd had sitting around for a while.  Gotta let them know what team you're on.

No quibbles here.  First time out I loaded the Synergy with a C6-5 and flew it nekkid, without even primer.  The flight was at a WSR section launch in Dayton, OH, and I made sure it was known that the flight was a paint qualifier, and qualify it did.  It left the pad in a rush and the flight topped out very close to the 1000' mark, seemingly without effort.  The Pitsco chute brought it back to the field behind the mid power pads, quite close considering the altitude.

Second flight was a post-paint flight at B6-4 Field, one of my pandemic launches.  Since it was a small field launch, I chose an A8-3 for the flight.  It left the pad and windcocked slightly to the right, the parachute ejecting just as it tipped over around the 250' mark.  I'd forgotten to pull the chute out before the flight and the fact that it had been shut up in the body tube caused a parawad recovery.  It recovered sideways, hit the grass behind shortstop and bounced without damage.  A straight on hit on the fins may have caused some damage, so it was a lucky landing. 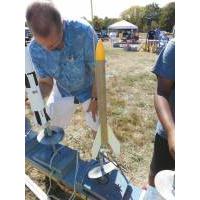 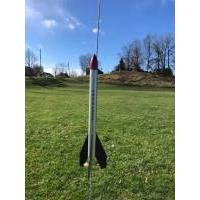 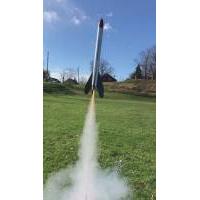