I bought this kit last year from Uncle Mike's Rocket Shack. It has sat in my build pile for a while and I decided to finally give it a try. It turned out to be easier than I thought it would be.

Construction:
The parts came packaged in a clear plastic bag suitable for hanging in a store. It was not fancy but I was not really expecting it to be. The components inside were first rate. They included: 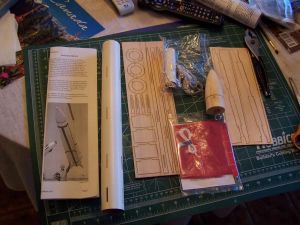 Construction begins with the motor mount. A slit is cut in the motor tube to accommodate the motor hook. The hook is then inserted and held in place by some masking tape.

The kit provides 3 centering rings but 2 of them are laminated together to form a single stronger one. These are the rings that have holes pierced to receive the Kevlar® from the shock cord. The two rings are glued together so that their grains lie at right angles to each other.

When the rings dry, it is a simple matter to slip the single ring in place over the aft end of the motor mount and the double ring over the forward end. Then the Kevlar® is threaded through the provided holes, tied off and glued into place. A fillet of yellow glue was used to strengthen everything.

The fins were easy, too. They practically fell out of their sheets. I started with the aft fins. Each one is removed and has a tab to fit into a basswood plate, which itself has a notch. Little or no sanding was needed to make it fit. I glued the fins to the plates with yellow glue and used the corner of a steel ruler to make sure of the right angles. There is a subtle difference in shape between the forward end of the fin and the rear which might provide a gotcha. Just make sure that the narrower end is forward. 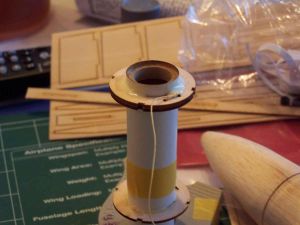 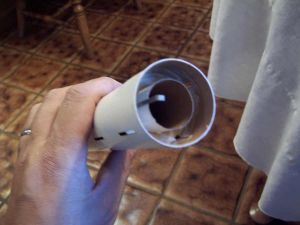 The forward fins are quite a bit bigger than the aft ones but are assembled in the same same. Each fin was glued to its plate with yellow glue and checked for straightness. These required just a touch of shaving to make fit. 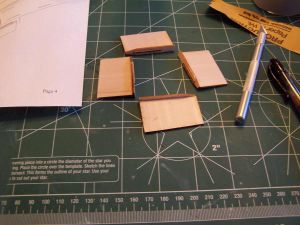 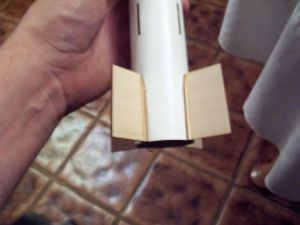 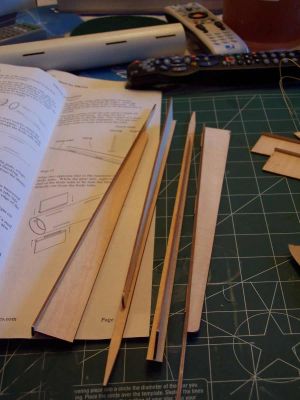 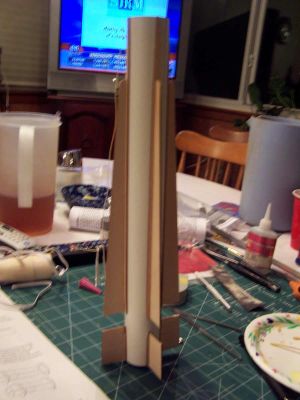 White the fins were drying, I decided to mount the motor assembly. I test fitted and sanded as needed to get a fit that was not too tight. A swab was used to run a ring of glue around the interior near the location of the forward centering rings. The mount was then pushed part of the way in and the swab was used to place another ring of glue. The motor mount was then pushed the rest of the way in. This must be done expeditiously so that you can get it all the way in and get the slots in the rings lined up with the slots in the airframe. If you miss by a little, it is not a great tragedy since a file or razor knife can be used to clean up any misalignment on the rings. 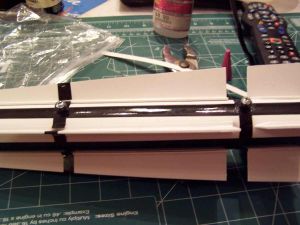 I test fit the fins into the airframe and found that they fit well but the tabs did not poke through the base plates very much. To add some strength, I perforated a line along where the fins would lie to form glue rivets. I then used CA to mount the fins to the airframe starting with the rear ones first.

Finishing:
Finishing was not too difficult either. I sealed the nose cone with Elmer's Wood Filler, let it dry, and sanded it down. I then primed with 2 coats of Kilz. This helped to fill in all of the rest of the minor imperfections. A round of wet sanding and the rocket was ready to be sprayed with gloss white.

The kit did not provide any decals. It did provide a metallic silver band with a peel and stick back to it though. This band was to be applied around the circumference of the nosecone near its base. This was accomplished with little problem.

The instructions indicated that the striping on the rocket should be done with tape or with Monokote. I was unfamiliar with both of these methods. Eventually, I found myself in the local hobby shop where they explained that Monokote was applied with a special iron. Not wanting to purchase the iron, I fell back on wide sheets with sticky backs. I was assured that that would adhere after peeling off the sticky back.

I sliced the sheets into the requisite 3/8" strips and began to apply them. They did adhere fairly well and were forgiving in the matter of lifting and repositioning. Going around corners though was tough.

The final step was to install the rail guides. They instructions for this said to cut an "X" in each of the desired locations with a razor knife and then put a drop of think CA on the spot. The guides were then screwed into position. 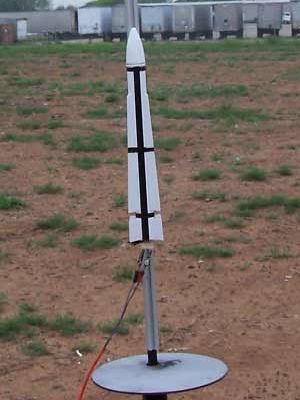 Flight:
The E9-4 is the only recommended motor. I loaded it up and set in on the rail. This was to be my first rail launched rocket. It looked kind of small there on the 6 foot rail, but I was raring to go.

It went very well indeed. The rocket took off straight and was a sight to behold as it kept climbing up, up and away. The parachute had not even deployed yet and I was ready to fly it again.

Then it reached apogee. I could barely hear the pop or see the separation...and then things got screwier. The chute opened but it and the NC kept getting farther and farther from the body. Come to think of it, the body was coming down pretty fast. The shock cord had separated for some reason.

The body crashed to ground with only minor damage. A fin will have to be re-glued. The NC, on the other hand, continued to drift away and was last seen heading SW in SE Bexar Country.

A look into the body tube and I could come up with no reason why it separated. It was like the Kevlar® was never there.

Recovery:
This one gets a 5 for flight but half a point taken off for the recovery. Of course, that is not the manufacturer's fault, but I am kind of bummed out right now.

Summary:
This is a great rocket and an easy build. It would make a nice intro to scale mid-power.