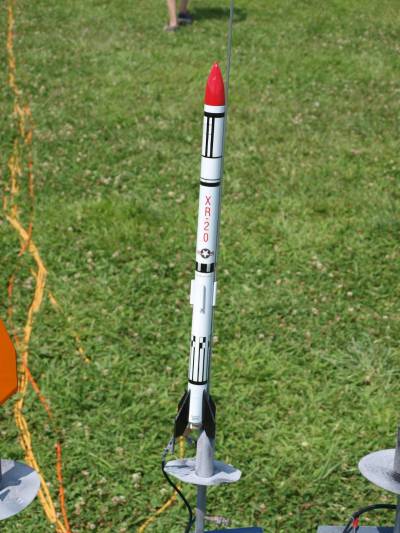 MRC, or Model Rectifier Corporation, was a comparitively short-lived low-power company from the late 80's.  Several years ago a number of their kits were available on Ebay, and being a new BAR, I picked an XR-20 and a Firefighter since anything old and OOP was good, right?  I was underwhelmed when they arrived, enough so that it took ten years before I went ahead with building the XR-20.  The XR-20 is a decent looking bird, but the parts leave something to be desired.

The first thing that strikes you about the XR-20 is that the body tubes seem flimsy.  Both of the tubes were badly out of round and it was difficult getting the coupler in.  The coupler is another story.  It's as thin as the body tubes and was out of round also.  I glued things together with Titebond II wood glue and rolled the structure on my desk to line things up as much as possible, and the results were okay if you didn't look too closely.  The engine mount went together nicely with the Kevlar knotted behind the forward centering ring.  I had to peel a layer off of the forward ring to allow it to slide into the bottom of the tube, which cured the out of round problem.  The nose cone was left in the top of the body tube overnight, after which it slipped in easily.  There is no base to the nose cone, so the screw eye is just inserted into a hole in the underside of the nose cone.  This makes the process of fitting the nose cone in place less simple than in most kits, but more of an annoyance than anything.

I could see that finishing was going to be interesting early on in the build due to the flimsy body tubes.  The tube spirals seem exaggerated, almost sharp as you run your fingers over the tube.  This would require a serious amount of Elmer's Carpenters Wood Filler, and the fact that the body tube was already thin would mean thinning it as little as possible.  First I sprayed the rocket with a coat of Valspar primer, then I took care of the spirals by loading up my fingertip with the wood filler and slopping down the spiral.  When it dried and was sanded I resprayed the body tube with primer, then hit the whole thing with thinned wood filler.  After sanding this process left me with a respectable looking body tube, but still too flimsy for my tastes.

The paint scheme on the face card was a simple one, in keeping with the nature of the rocket.  White body, black fins, red nose cone.  All of the paint was Valspar gloss.  So easy a caveman could do it.  Or a silverback in my case.

The decals.  Blessed bovine these were terrible.  Decent looking enough, but a) peel and cuss, and b) completely lacking in anything resembling adhesive.  They had already fallen clear of the backing paper when I opened the kit.  Not having any of that, I printed a set on Bel Inkjet Decal Paper.  They're mostly wrap decals, so they're a pain in the butt anyway, but the improvement was tenfold. 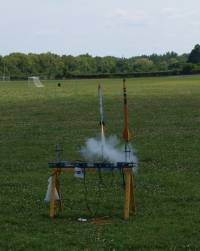 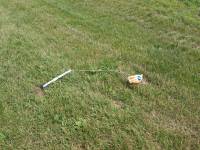 Well, this will be short.  It appears that one flight will be all I dare make with the XR-20.  It was among a box of finished-but-unflown rockets that I toted north to a TORC launch in Dayton, Ohio.  It's a nice field, flat and wide, so I felt justified in loading the XR-20 with a C6-5 to let it stretch out and show what it could do.  That part was fine.  It left the pad quickly and flew to a more than respectable height, then recovered nicely in the field to the left of the pads.  When the range was safe I walked out and retrieved it, fully expecting to give a much better, and quite surprising, flight score.  I immediately noticed that the paint under the lowest wrap decal was bubbled and touched the spot on the body tube.  The tube wasn't there.  The ejection charge seemed to have burned away the cardboard, leaving only the decal to keep the airframe from being open to the wild winds.  The XR-20 was retired on the spot.  Luckily I took a glamour shot on the pad before the flight. 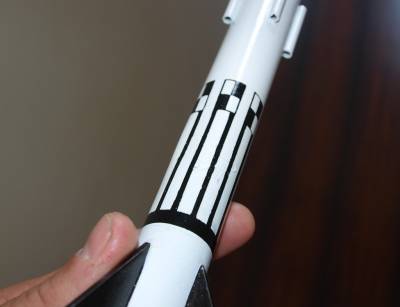 Cons: Cheap components.  Worst decals ever.  (Self-stick and they FELL off of the backing paper.)  Body tube was so thin that the ejection charge burned it away under the decal that I had to make.  Save your money. 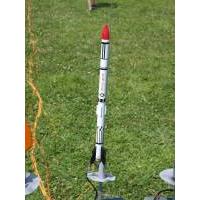 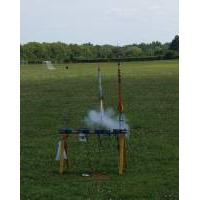 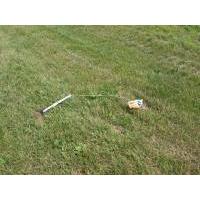 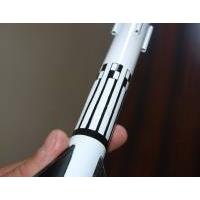