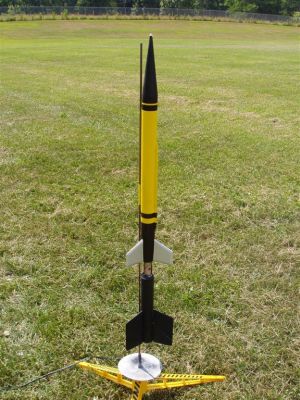 Brief:
This is a two-stage scale model of the WAC Corporal with Tiny Tim Booster from Aerospace Specialty Products. It has a 24mm booster staging to an 18mm sustainer.

The BT-55 tube for the upper stage had a significant crease in it. I'm not sure where the damage originated, but I contacted BRS Hobbies, which is where I purchased the kit, and Brian sent me a replacement tube immediately. BRS Hobbies is a great company to deal with. Also, the booster stage BT-55 tube was uneven on one end. I had to trim about 1/8" to make it even. 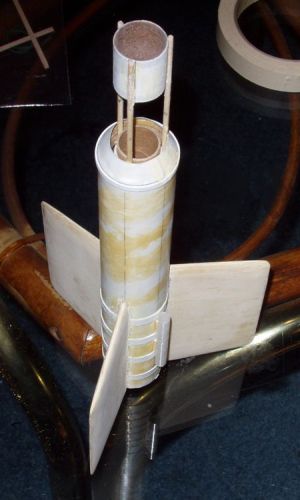 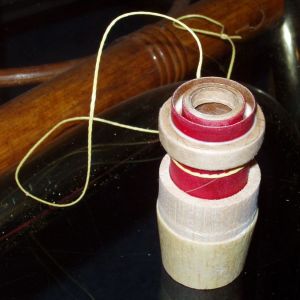 The instructions were well documented with detailed steps and helpful illustrations. There is a checkbox beside each step to help keep up with what you have done. If you read through them beforehand, you'll see some steps that can be done concurrently. There is also good information on how to use the necessary adhesives and different options for finishing. The templates and illustrations were excellent except for the fin marking/alignment guide. The problem with the fin marking guide is the body tube eclipses the circle for the body tube, so you don't know if it is perfectly aligned with it or not. Instead of using the provided guide, I made my own with the fin position wrapper and fin alignment guide printed from the freeware program VCP. The only other deviation I made was leaving out the washer nose weights. Based on the CP/CG relationship they were not necessary for stability. I learned a lot of new scale modeling techniques building this rocket. The styrene strips on the booster section looked awesome. The fins took a bit of work though but were not too hard to shape. I worked hard to get them the way ASP suggested.

Finishing:
I prefinished the body tubes with 3 coats of Elmer's Fill 'n' Finish. After shaping the fins, I coated them with 3 light coats of yellow wood glue and sanding lightly between coats. I also did this to the balsa nose cone, boat tail, and balsa conduit. After the glue treatment, I used 2 coats of Fill 'n' Finish on the balsa sections. I used Krylon primer and paint with a matte finish.

Flight:
I had some really bad flights with this, but none of it was due to the rocket. The recommended motors seem appropriate compared to what I saw and simmed. Please note, not to try to fly the upper stage by itself on an A motor. The recommended minimum is a B4-2. I tried it on an A8-5 and it lawndarted before the ejection occurred. For the first flight, I attempted a 2-stage configuration but forgot to install the upper stage motor. The booster still pressurized the upper stage enough to deploy the chute while boosting and the chute was destroyed. When it landed, the booster suffered a broken fin, but I fixed it at the field. I tried again the same day. On the second flight, the upper stage motor lit but did not separate. I think I didn't secure it well enough and it got stuck on the passport tube. It fried the entire inside of the booster section. Through both flights, the upper stage was not damaged. I repaired the booster section later and tried again. I flew the upper stage by itself on too small a motor and lawndarted. The only damage was the very tip of the nose cone. It looked a little mashed and I trimmed it at the field. I then flew the 2-stage configuration again. The staging and flight were perfect, but the field was a little too small and wind a little too strong. I recovered the booster, but the upper stage drifted off far away. I never found it. I noticed afterwards there was a big difference in my RockSim weight and the ASP weight, which probably affected the differences in estimated altitude. RockSim was predicting only 400+ feet but ASP calculated 710'. I think the rocket was probably a lot lighter than what I had modeled in RockSim. If I had weighed it beforehand and adjusted the RockSim design, I probably would have gotten a more accurate estimation. I should have used a smaller chute and/or waited to fly it in a bigger field.

Recovery:
The booster uses tumble recovery and on the one successful flight, it came in undamaged. The upper stage comes with a 12" mylar chute. Mine was destroyed on the first flight when it came out too early. For subsequent flights I used a 12" military silk chute. Seeing as how I lost it, I'd say it came down too slow, especially in 10+ mph wind. In my opinion, the upper stage is sturdy enough to come down faster and not sustain any damage.

Summary:
I think this is an excellent kit. I learned a lot about scale modeling and staging . Even though the flights were all ill-fated, it was from no fault of the rocket. This rocket suffered lots of abuse and with minor repairs was still flyable. The durability is one of the main PROs of this kit. It also provides a good education to those getting into scale modeling and to learn about direct staging. I think the only CON I found was the alignment guide, which was probably usable I just didn't trust it. This was an awesome rocket, and I look forward to building more kits from ASP in the future.