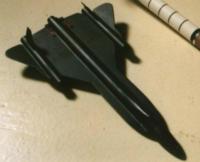 Construction:
According to a note in the kit, Apogee had a supply problem with the nose cones. So as to not delay delivery any further Apogee vacuformed their own nose cones as a substitute. The note went on to say that the vacuformed nose cone probably wasn’t durable enough and nicely included a coupon to replace it with a proper nose cone for free with my next order. More on this in the flight report. 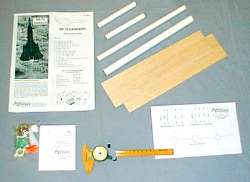 The kit is simply packaged and the important little parts are thankfully sealed in separate bags. A nice thing I noticed also was that the kit came with spares for the little (easily lost) rubber bands that actuate the elevons. The instructions are very clear (except for one thing mentioned below) and the illustrations are excellent. The first thing I did was to apply balsa fillercoat to the balsa fins while they were still in their sheets. I do this because I find it easier to apply the fillercoat and even sand to a nice finish while its still safely in one big sheet instead of a dozen tiny pieces. Later I round the edges, usually after its been glued to the model. The instructions don’t say to do it that way, it’s how I like to do it. I’d also like to take a moment to advocate the use of Sig brand dope and fillercoat. Our hobby shop normally carries only Pactra products, which I hate. The Sig stuff seems to go on better, provide a nicer finish and the label even tel! ls you what kind of chemistry is compatible (butyrate, nitrate, etc...). The templates in the kit work well and the die cutting on the balsa was very sharp. 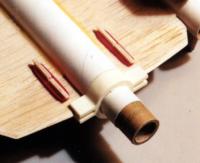 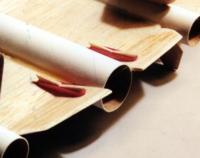 My only complaint about the instructions was in step 22. This regards the placement of the rubber band hooks for the elevons. Instead of a drawing, a photograph is used to illustrate the installation. Unfortunately, the photograph reproduces almost completely black in the critical area. I scratched my head a while and figured it out, but it would be nice if that were changed. I include a picture of the area on my model for other builders to consult. 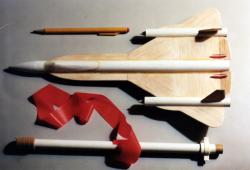 Finishing:
Finishing is straightforward since the paint scheme can’t get any easier – flat black everywhere! My only reservation in this area is the lack of decals. I know a secret spyplane should have no markings, but decals are always the last cool touch to any model. Lets face it, our models spend 99.9% of their time on the bookshelf. They really are displays that fly once in a while. On the other hand, the model is a bit on the small side anyway and frankly looks great.

Flight:
I made three flights, all using Estes A10-3T motors. Tim’s micro motors aren’t available in California for some reason. I would really like to try one. You load a motor into the boost pod, fold up the boost pod streamer, and insert the pod in the body of the SR-72. The pod has tabs that keep the elevons straight during boost. Boost was straight and with an A10 motor this thing really leaps off the pad. Wadding isn’t required.

Recovery:
On each flight, right after core ejection the model went immediately into a flat, fast, non-porpoising glide. I had a friend press the button while I waited with the binoculars, but the transition took place so fast I didn’t have time to watch it. Here in the desert we have mostly dirt and gravel, but there was no damage to anything on any of the landings. This is surprising since I expected the ventral fins to suffer.

I went to the launch site that day with several very skeptical model airplane building friends. I have to say we were ALL very impressed with the flight performance of this model. Completely reliable and with a remarkably flat, fast glide. I was really expecting this to perform like other cool looking delta wing rockets, which is to say I expected it to fall in a flat attitude instead of glide. I think I owe my success on this model to two things: light weight and correct c.g. position. Here are my weights:

Please look at the picture I included comparing my c.g. to the plans c.g. I did a lot of tests and my c.g. ended up about 1” behind the plans c.g. You should do your own tests. I’m sure Apogee did a lot of tests and they found the correct c.g. for them. Not much is said in the plans on how to test glide a model like this. I think this is very important! Grip the model where the chines meet the main wing. Throw it like a javelin at a 45 deg. angle as hard as you can. There is no other way to get enough speed or altitude to get a realistic view of how it will perform in actual flight! Many attempts are needed to average out the effects of asymmetrically releasing the model. Check the trim of the model. If it looks straight but turns hard you are probably not releasing it smoothly. Tim’s fear about the temporary nose cone I got turned out to be correct. I replaced mine with a spare balsa cone from Balsa Machining Service. Since it was balsa I could carve a little shovel effect into the nose thereby blending in the windshield a little better. This was slight and may not be visible in the photos.

Summary :
My main cons are: 1) the illustration of elevon hooks, 2) the need for a more detailed discussion of how to test glide the model, 3) decals would make a great kit into a classic!

The pros: Overall this is a great kit and a great flier. Tim has done an excellent job of designing the kind of kits that got me excited about rockets back in the 70's.

I can't ever say the name of this kit without smirking. I always think of that scene in Spinal Tap where the amplifier "goes to eleven". It's an SR-72. That's one better now isn't it?

This is a nice, fun kit. While the construction might pose a problem or two for the beginner, it is straight forward and I thought the instructions were well written. The quality of the component met my expectations and were perfectly adequate for the type of model. The molded elevon lock is a extra I am not used to seeing on a small kit. The only place where I varied from the plans was in the CG placement for the glider. I ended up with the CG even with the front of the nacelle tubes (not the cones). As built, my model did not require any weight to be added to the nose, I trimmed it by adding to the glue fillets. For boost I added clay behind the centering rings at the front of the power pod. The boost CG (loaded and ready to go) is 1/2 inch ahead of the glider GC position. I also left off the folded paper canopy simply because I was too lazy to want to do the filling and sanding. I finished the model with one light coat of spray Poly-crylic water based coating as a sealer and a coat of Krylon semi-gloss black. Boost was arrow straight on the recommended engine sizes. On an A10-3 I was able to get 42 second flights on a calm but humid day. Very nice. The model would benefit from longer delays as it is still going up at ejection and the added push of the ejection makes is perform a tight loop before it settles down to a even glide. Pros: good quality kit and an easy build. Great flyer! Cons: the centering rings are a tight fit by the time the large wing is attached. I believe the shrinkage of the white glue fillets distorts the tube a little. Sanding of the rings is required for the pod to slide well inside the tube. DO test glide and trim prior to boosting the model. A cut down bottle brush works very well for cleaning out the gunk left from ejection and insuring the pod doesn't stick on the next flight. I disagree with opinion about tossing the glider hard for a test flight. The glider is only going fast at boost and at the boost to glide transition. It then settles down to it's glide speed. The ideal test glide should be close to the gliders natural glide speed with a even level push. Over energetic throwing generally ends up with spearing the model into the ground or in inducing a stall.

I built this according to the instructions including the clay in nose with C.G. as stated in the plans. The maiden flight resulted in a nose dive for the sod. I cut off the nose cone, dug out all the clay, reattached the nose cone with the C.G. now where T.B. had his even with the nacelle intakes (not the tip of the cones) and the rocket glided well. I will now test glide any kit gliders I make and not take the kit maker at their word like I did with this one. The joint of the repaired nose cone is weak and it fell off and was lost after the third flight. Now I have a noseless darkwing until I replace the nose some how.

Order on friday arrived on monday. One kit backordered but two emails to communicate what was up before I even received the other kit. This is what customer service is all about. I will be back for more but right now a "Dark Bird" awaits my attention