Brief:
This was the first monocopter kit released by Art Applewhite. He previously published a free plan for a monocopter built from Popsicle sticks and now has a 13mm, two 18mm and a 24mm version. The Dragonfly flies on a variety of 18mm black powder motors and features an 8" wing. 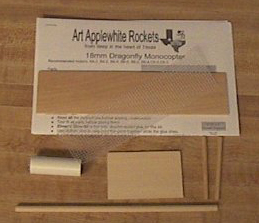 Construction:
This monocopter consists of the following parts:

Art's known for simple but elegant kits, and it looks like he stuck with that theme. The monocopter is made from just 9 components. Besides gluing parts together, all you do is make 4 cuts and drill one hole. This will be a quick build. Tools and materials that are required are Elmers Glue-All®, hobby knife, scissors and ruler. I found my Elmers had dried to much, so I used carpenter's glue throughout.

Heres a summary of the steps:

The completed center section consists of 2 pieces of basswood and the dowels.

I built the motor mount in parallel with other components. This consists of a basswood motor mount, the tube and the drywall tape. The tape is self adhesive to some extent but wanted to lift when soaked in glue. So, I used some small plastic clamps to hold it where the tube met the motor mount. After about 20 minutes, I removed the clamps and let the glue set the rest of the way. 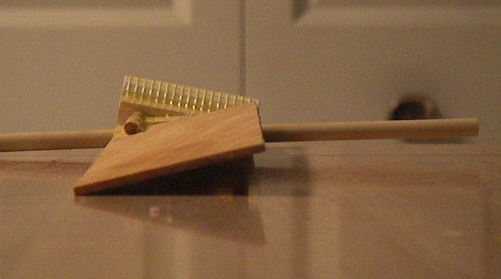 The support dowels are mounted parallel with the wing. The wing and motor mount are attached with one end over one dowel and under the opposing one. In the absence of a good airfoil and a long burn motor, monocopters need to have the motor mount and wing canted to provide lift. Mounting these items between the dowels provides this angle.

The instructions say to sand the dowels so they mate with the tube. On mine, only the bottom edge touched so a slight nick with a knife did the trick. I filled the remaining gap with glue.

I drilled the 1/4" launch lug hole on my drill press.

Finishing:
Art recommends at least a light clearcoat. I used Helmsman Spar Urethane® (the only clearcoat that I had). 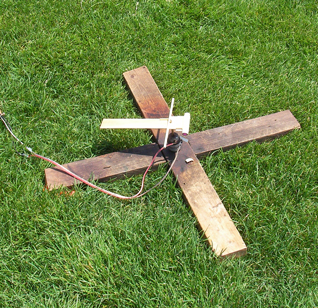 Flight:
Prep consists of centering the motor in the mount, adding a tape thrust ring and friction fitting. You can use booster motors or those with up to 3 second delays. I flew mine on a C6-3. It flew off of my standard pad, which happens to be similar to that described by Art and I already had a 1/4" stubby monocopter rod.

It flew nicely, even in the 10+ mph winds. It was still at a good altitude when the ejection charge went off.

Recovery:
At burn-out, the Dragonfly merely flutters to the ground lightly. I found that the side of the motor had burned through just above the nozzle. The burn through also made a small hole in the motor tube, but it's flyable as is. 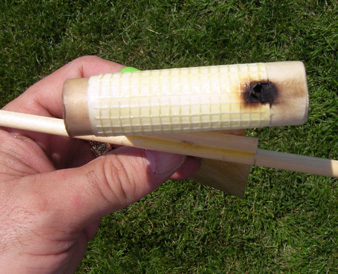 Overall this is an awesome flier but I'll ding it for the hole. I had seen this before on spinning rockets and I suspect this is just the physics of the beast.

My video isn't very good, so I'll refer you to this one.

Summary:
This is a fun kit, easy to build and sure to get noticed on the field. It flies great on a C6-3. Since I don't think the burn through is avoidable, I won't let it detract from my overall rating.