You have to love a rocket that assembles quickly and that can be flown in your front yard (and not that big of a front yard either)! That's what you have with the 18mm Art Applewhite's Dragonfly.

I brought this kit, a hobby knife, a ruler, a pencil and some Elmer's Glue with me on a short business trip. I was successful in building the kit while in the hotel one night and finished it in the AM the next day. It was that easy. 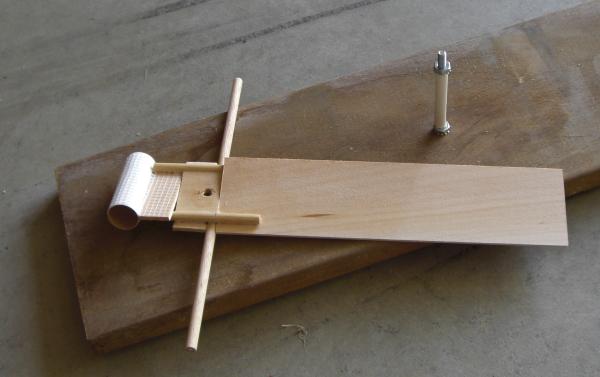 The Dragonfly comes with a 3/32" basswood wing, a 1/4" Balance Beam dowel, two 3/16" support dowels, a motor tube, some fiberglass tape and a piece of 3/32" basswood that is used to create the support pieces. That's it.

The instructions are printed on three pages of 8½ x 11" paper. The last page focuses on flight and the building of a monocopter launch pad. There are B&W pictures and illustrations to ensure an easy build.

There is very little cutting that takes place. The Center, Center Support and Motor Support are all cut out of the small piece of 3/32" basswood. Then later in the build, the fiberglass tape needs to be cut to fit around the motor mount.

Building is logical and easy to follow. You do have to pay attention to the pictures to ensure you are gluing the supports, dowels and balance beam on the right sides of the center. 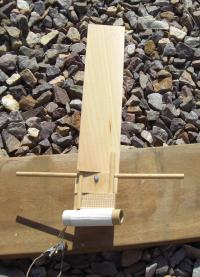 My only slight tweak to the instructions would be in step 4 where it simply says, "Glue the Balance Beam to the Center". There should be some indication that this should be centered and equally spaced on both sides of the Center.

One interesting step is placing the fiberglass tape around the motor tube and securing it to the support. This requires the tape to be cut out to clear the support dowels and then to be cut to the length needed to fit. Once the cutting is done, it is glued in place. Then the weave is filled in with Elmer's Glue making a nice secure motor mount.

Now, I did say that I built the rocket at the hotel, which is true, but I completed the final step at home. That was the drilling of the 1/4" hole in the center for the launch rod.

I made my launch pad using the basic idea outlined in the instructions. Amazing that you only want a 1/4" long launch rod!

I didn't paint or finish the rocket in any way.

Overall, for CONSTRUCTION I would rate this kit 5 points. Fast, easy, and quality materials. Instructions were easy to follow. Also, I believe that some may avoid trying to make their own monocopter and Art Applewhite has now made it as easy as 3, 2, 1. 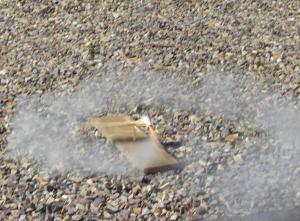 The Dragonfly is simple to prepare for flight. All that needs to be done is that you wrap a 3/8" band of masking tape around the motor to make a thrust ring. Then install the motor.

First flight was on an Estes C6-3. After ignition that rocket whirled quickly and took off. My guess is to about 70 feet. It then stopped, seemingly pausing, and then it fell to the earth. On the way down the ejection charge fired. The fall was rapid with the motor tube leading the way. I'm guessing that is another reason to use the fiberglass.

The next flight was a repeat flight using the C6-3. Again, nice performance. After this flight I noticed a small burn hole starting on the outside top of the motor tube. (Flight Video Below) 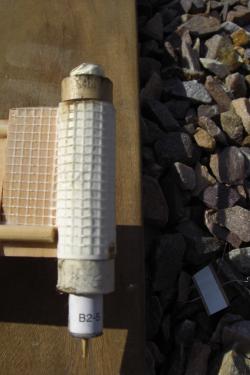 For the third flight I tried something special. I had an old Apogee B2-4 motor. I drilled out the center of the C6 thrust nozzle until the B2-5 slide into it. I then applied tape to the forward end of the B2-5 so that it stayed centered in the old C6 case. I then loaded it into the Dragonfly.

The flight was cool. It didn't come off the pad as quick and it almost seemed like a slow motion flight, but the thrust was adequate and with a 3 second burn, it was neat to watch. I miss those old Apogee Motors! (Bottom Video Below)

For FLIGHT/RECOVERY, I would rate this rocket 4 ½ points. Exciting low altitude launches that look and sound different. Nice appeal. The only detractor would be the burn hole that appeared after the second flight.

I give the rocket an OVERALL rating of 5 points. This is one of the relatively lower priced rockets that you just "have to have".