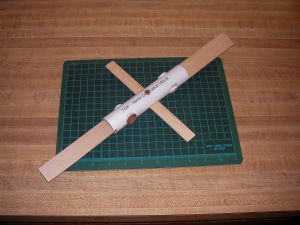 Brief:
The Double Helix is another new twist on the monocopter (pun intended)--it has two wings and flies on two motors. In fact, it's more or less two 18mm Helix Monocopters stuck end-to-end. Technically, it's not a monocopter but a bi-copter. 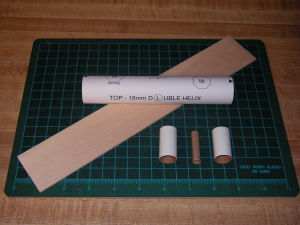 This build is similar to that of the 18mm Helix Monocopter so I recommend the reader read that review. The build only requires Elmer's Glue All, and an X-Acto knife with a new #11 blade. Unlike the monocopter, you actually have to cut wood. One slab of basswood forms the two wings and balance beam. You also have to drill a hole in the beam so the lug can pass through it. This step is not that critical and you could just cut the hole with your X-Acto. 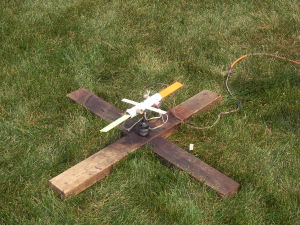 Flight:
You form thrust rings with masking tape and friction fit the motors so they won't fall out. The motors should be oriented with their nozzles down. As with a Art's standard monocopters, you need a sturdy pad with a short ¼" rod (1" or so). Art provides plans for a suitable monocopter pad in the instructions. You will also need a clip-whip or a launch controller capable of firing two motors reliably since there is no way to twist those igniter wires together.

I first flew this on two C6-5s, ignited using a clip-whip. Both motors fired, and the flight was fantastic. It was a really fast flight and was the highest of all my monocopter flights. Nice!

I wondered what would happen if just one motor ignited, so I loaded a new C6-3 in one mount and left the spent motor in the other. It flew just fine but with a lower altitude. And the motors are not even canted toward the CP/CG! This might be the safest cluster that I've flown.

Recovery:
Unlike most of Art's monocopters, this model continues to spin until touchdown. Me like!

Summary:
Like the standard Helix, this kit is easy and quick to build. When I first got this kit, I wasn't sure I'd like the clustering. However, the flight changed my mind. It was quite impressive and well worth it.