When I purchased my BSD Thor, I knew I would also need to purchase new motor hardware. So I also purchased a 38mm set with a 38-240, 360 and 480 case. I also purchased a PML 54mm to 38mm adaptor to allow me to fly the 54mm-based Thor on my new hardware. So needless to say, this was a large outflow of money to venture into the largest rocket I have built. Is it the tallest I've built? No, the Mirage was 87" compared to the Thor's 85". Was is the widest I've built? No, my scratch-built Meanie x2 is 5.5" compared to the Thor's 4". But the combination of height and width made this the biggest rocket that I have built and that was exciting as I pulled the pieces from the box.

The kit includes four (4) lengths totalling 68" of 4" glassine-coated paper tubing and a plastic nose cone to make up its length. There are two (2) 6" couplers to connect the tubes. The motor tube is a 54mm tube that is 17" long. There are six (6) large, 3/16" thick plywood fins, three (3) 1/8" composite centering rings, and two (2) 1/8" composite bulkheads. The recovery system includes a 4' x 1" nylon strap and 20' of 1" wide elastic, a quick link, two (2) Eye-bolt assemblies, and a 45" diameter nylon parachute. BSD has also started to provide motor retention hardware which included a pair of blind nuts, allen head bolts and retaining clamps. There is a 1/2" diameter launch lug provided and a wonderful set of vinyl and brushed gold decals.

This is my second BSD kit (Diablo) and the 10 pages of instructions are one of the highlights to a BSD kit. They are illustrated and photo illustrated. They give more than just step-by-step as they provide information on optional dual-deployment configuration, numerous building tips, Level 2, marking CP, CG and vents, etc. So even though this is a big rocket (all relative) the instructions could guide a moderately experienced builder to a successful build.

I have found that as individuals build more and more high-power rockets they make more and more modifications to the kits they purchase. Not necessarily a negative against the kit, as they are really trying to employ "favorite" techniques. The Thor can be built 100% stock with no modifications and be a perfect Level 2 kit. So, did I build mine stock? I made only two minor changes. I added a 2nd eye-screw to the upper bulkhead and one to the nose cone so that I could put a strap from the bulkhead to the nose cone. I also didn't install the launch lug and used Blacksky Rail Buttons instead.

As far as the build goes, it was straightforward and fairly easy. I found that I had to sand the inside and outside of the three centering rings just enough to take the black from the laser cut off to fit the tubes nicely. Other than that all the parts fit together well.

Follow the instructions closely because you don't want to go slopping glue around until they tell you to so that all the parts fit correctly. This is especially true for checking the fins against the centering rings and verifying fit through the fin slots.

Speaking of the fins and slots, this was, in my opinion, the most challenging thing about the build. The body tube is pre-marked and you must physically cut the fin slots yourself. It's not a terribly difficult thing to do, but as BSD recommends ensure you have a sharp knife. Also be aware to take your time. You will be cutting six (6) slots. The biggest problem of installing the fins in aligning the upper and lower fins. BSD provides a fin guide and then suggests using a scrap piece of wood that is "tack glued" to the upper and lower fins to keep them in perfect alignment. I used an angled ruler and clamps. Mine did not come out perfect but not terrible. I think I had "slopped" some glue and one of the upper fins didn't sit flat against the motor tube. It's not obvious unless you go looking for it, so I moved on.

For fin fillets, I deviated from the directions and used ProBond glue for initial fillet. This does a good job filling any gaps between the fins and the body tube. I then followed that up using 30-minute epoxy with then gives a nice smooth fin fillet. I've been using this technique on most of my builds lately. It took a lot of glue to do these fillets! (additional comments about ProBond glue) 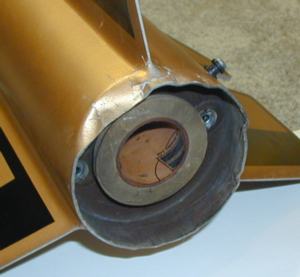 There is one area that has come to bother me about the Thor kit. That is the bottom of the rocket and the amount of exposed body tube without support. There is just about an inch as seen in the picture. This didn't seem to be a problem until after flight. Every landing bent that section in some way or another. The instructions talk about this area and suggest "to coat the entire centering ring and inside of the airframe tube at the rear of the rocket with epoxy. This will help protect it from heat and impact." Maybe it "helped", but it was still a problem for me. I would suggest (and have no idea how well this would work) taking a piece of coupler and gluing it into the rear section below the final centering ring. This would effectively double this area and increase its strength.

Finishing was the most time consuming task because of the rocket's size. Even though I used my standard method for finishing Kraft paper tubes and also for finishing plastic nose cones, it just took a while. I also had trouble finding a stand to hold it while painting. For the bottom section I took two bar bell weights, stacked them, and put a 1" in dowel in them. I then took a cap from a can of primer and punched a hole in it and pushed it over the dowel. The 54mm motor tube was then held fairly sturdy with this arrangement. For the top, I tied a rope to the eye-hook and suspended it upside down from the garage ceiling. In this manner I was then able to paint both sections. BSD has a nice color scheme on their prototype. I choose a different color scheme. I painted the bottom with ColorWorks by Krylon Gold and the upper section with dark blue paint from Walmart (additional comments about Walmart paint). I then used used Krylon Clear over everything to finish it off. Be sure to wait a week before putting Krylon clear or anything over any other paint!

After painting I started on the decals. There are a lot and this too takes a lot of time. I applied all the black decals, but didn't use the yellow THOR or the Brushed Gold. I decided that it would look a lot better with a gold THOR so I contacted BSD about purchasing a set in Gold. They were able to accommodate this request. I will be cleaning it up after a somewhat rough trip (on the finish) to/from NARAM-43 and then applying the gold THOR.

The last thing I did, which isn't part of the kit, was to build up a PML 54 to 38mm adaptor and install Blacksky Rail Buttons.

Overall, for CONSTRUCTION I would rate this kit 4 ½ points. I really can't stress it enough, that for this size of rocket the instructions would allow less experienced builders to be successful. The parts quality is good. The kit comes with motor retention and a wonderful set of decals. Right on! The other thing that should be said, is that the instructions didn't ignore that some may want to modify the kit for dual-deployment and then gives recommendations on how to do that. If we could stop that rear tube damage this would be perfect!

My RockSim'd rocket shows this for the planned flights:

My rocket had a CG at 54.75" from the nose cone. BSD indicated that CP is 64.75" from the nose cone (20" from the bottom). BSD's web site says the Thor weighs between 3 and 5 pounds ready to fly. My finished rocket weighed in at 89 ¼ ounces (5 ½ pounds) without the motor, so the weight of my PML adaptor and the gluing really seemed to take the weight up. Two other weight adders were a very large eye-bolt that I screwed into the nose cone and an small eye-screw in the upper bulkhead. These were added to allow me to tie a strap between them, just in case the nose cone popped off.

My first 38mm flight ever and the first flight of the Thor was on an H123-S. Lift off was slow with relatively low altitude (RockSim says 630 feet). The rocket had arched over and was nose cone down upon ejection. Descent was a bit too fast and it suffered its first small dent upon the bottom edge of the body tube.

The next day, I loaded an I161-M. My first "I" motor. It was a bit windy but the Thor took off and gave a beautiful straight flight. I could hear a whistling after thrust stopped that I presume to be from the gap between the upper and lower fins. Again, the nose cone was down upon ejection.

During the same day, I prepped the Thor for its I211-L flight. The long delay was a concern, but a medium seemed too short, so I was stuck in the middle. Wow, those 211's are nice. Deployment was late as it was a couple of seconds past apogee. While coming done under 'chute the upper section came loose (I guess I didn't attach the strap to the bulkhead) and fell on its own. Scratched the paint but no damage.

The last flight was the next day on an I357-M. Great punch off the pad, the delay was long again by a couple of seconds, but it recovered.

Again all recoveries were fast enough to dent that bottom section. The damage picture above is after the last flight on the I357. I think I will be bumping up the size of my parachute and I will also be flying the next flights with dual deployment.

For FLIGHT/RECOVERY, I would rate this kit 5 points. I'll blame the weight of my rocket on the fast descent rate and not take away on the rating.

I'd recommend this kit as a good candidate to do double certification on the same rocket. Go ahead and do your Level 1 on an H123, the switch to a "J" for your Level 2. Overall, I enjoyed building and flying this rocket. I211's will be what I push for (as I am not Level 2 yet) when flying it in the future. The kit has great instructions and quality components so you can't lose. I give the kit an OVERALL rating of 4 ½ points.

Agreed on the tail-damage issue - All new runs of the Thor will not have a "notch" in the aft fin set - therefore, the aft ring is now located nearly flush with the end of the airframe tube This should eliminate this kind of damage, with no loss of strength. All kits date-stamped from 10/25/01 on will incorporate these changes. We found the same with the original Horizon and Horizon 54, which were changed earlier this year. Thanks for your input! - Scott Binder (BSD High Power Rocketry)