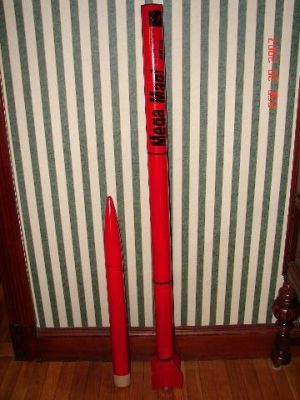 Brief:
This rocket is called the "Mega Mag!". It is a beta kit from BoRocks Rocketry. The rocket wasn't in kit form at the time of this review. It came in a LARGE box.

Construction:
The parts were all very high quality and include:

No parachute was included with the beta kit. I decided to use two 24" chutes for the rockets first two flights. 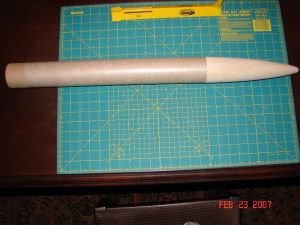 This rocket is basically 4 BT-80s, a huge almost foot long balsa nose cone and 4 fins. This is wrapped around a Sunward triple 24mm motor mount, a baffle, a bulkhead, and lots of Kevlar® line and shock cord.

The beta rocket as built breaks between the third and fourth BT-80. 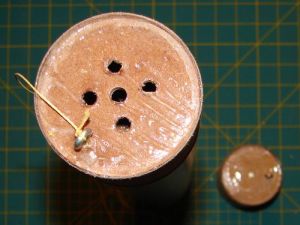 I am sure these two issues will be corrected for any future kit version of this rocket. Photographing the whole rocket all at one time is difficult. This thing is huge! 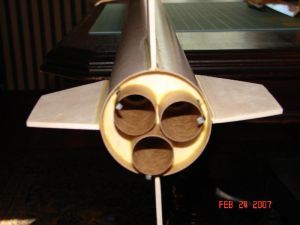 Finishing:
I used Elmer's Fill 'n' Finish on the fins and nose cone (two coats each), sanded and then primed everything, followed by three coats of finish paint. I used Painters Touch primer and Gloss Red paint.

I then put on some home made decals and used some black detail tape on the rocket.

I purchased some chrome tape from an auto supply store and wrapped each of the three exposed engine mounts with it. It gave them a very finished look. 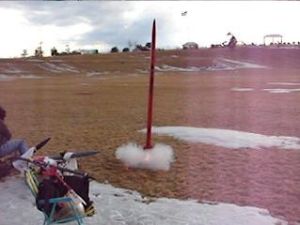 Flight:
I used the recommended motors for this rocket, 3 D12-3s. Motor retention is by engine hooks. Preparation technique for this rocket is actually easier than what I do for much smaller rockets. Since it has a baffle, I didn't use any wadding. That's a first for me.

First launch: 3 D12-3s. The Mega Mag! left the pad very slowly and hit about 600 feet or so. Very impressive flight. However I had expected it to go higher. Ejection was perfect and two 24" chutes carried it to within about a hundred and fifty yards of the pad. When we got it back I found that only two engines had fired.

Second launch: 3 D12-3s. This time all three engines lit and the Mega Mag! left the pad very quickly and there were three distinct fire tails showing through a cloud of smoke. It was an awesome flight. We estimated that it went a thousand feet. Now that's an estimate so I can't say for sure but it was way up there. 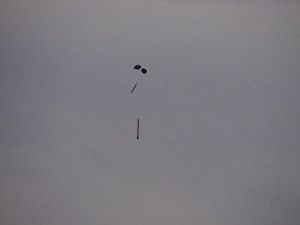 Ejection right at apogee. It was on the windy side and the two chutes carried it what seemed like almost half a mile, however, I recovered it with no damage. 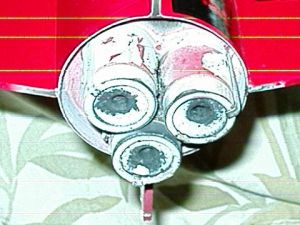 Summary:
I really like this rocket. All of the parts were top quality and it was a dream to build and fly. It's so big that for a while I had parts of it all over my house!

BoRocks is coming out with some very interesting rockets and I look forward to building more from them.

One of the things that I believe BoRocks is working on is the weight of this rocket. I believe they are trying to get it down to 11oz empty.