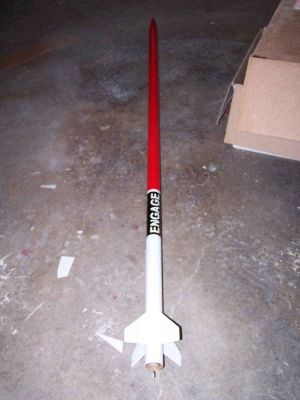 Brief:
I kinda miss my Estes Mean Machine and have several similar rockets sitting in the inventory. I chose this one simply because it was the first one I ran into when I started to look. I also liked the simple color scheme on the face card. It a long, skinny four fins and a nosecone. I have no doubt it is a Mean Machine knockoff, though slightly shorter.

Construction:
Construction begins with the motor mount. Marks are laid out on the motor tube for the engine hook and the centering rings. A slice is made to insert the hook and then the builder is instructed to punch out the rings from the sheet of cardboard. When doing so, I realized that I would have to be extremely careful because these are without a doubt the flimsiest and thinnest rings I have ever seen in a kit.

The rings were glued in place with Elmer's yellow glue, thoroughly filleted, and then filleted again.

I noticed that this rocket did not come with a thrust ring. I didn't like that and I had none of the proper size sitting around so I cut the end off of a spent 18mm casing to use for a thrust ring. It was glued in right over the engine hook. 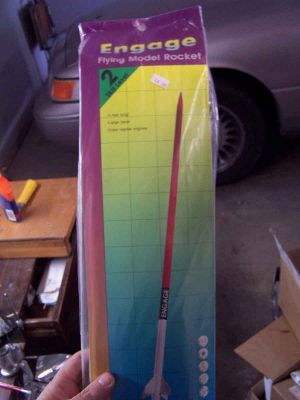 After the fillets on the centering rings were good and dry, I did a bit of light sanding to make them fit into the body tube better. I was afraid that too much force applied might bend them on the way in. The motor mount was then installed with yellow glue.

Unlike the centering rings, the balsa fins seemed in good shape from good material. They were die-cut but came easily out of the sheet. All of the edges except for the roots were sanded round. The fins were then treated to a coat of Elmer's Wood Filler and scraped with a razor blade. A few minutes later, I began to notice some significant warping in 3 out of the four fins. I decided to wait until they were dry to try and correct this.

The kit came with a wraparound fin alignment guide which was cut out and taped onto a body tube. The fin lines were then transfered to the tube and extended with an angle.

While waiting for filler to dry, I used a pin to make perforations along each of the fin lines for better glue adhesion.

When the filler was dry, the warping was still present but not nearly as bad. I sanded down the fins and then used the pin to perforate the root edges.

The process of installing the fins then began. I used a double glue joint and yellow glue, waiting for each one to stiffen up before applying the next. 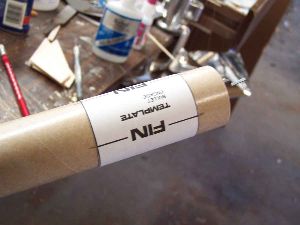 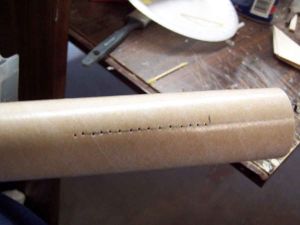 The main body of the rocket consists of three tubes, one of which has already been dealt with in the installation of the motor mount and fins. The tubes are joined together with standard coupling tubes. For the first, some yellow glue was swabbed around the interior of the end of a BT and the coupler slipped in the to halfway point. It fit just fine.

The second tube was dealt with in almost the same way except that a length of Kevlar® was tied around the coupler. It was then slid in to the halfway mark and allowed to dry.

The nose cone surprised me. It was pretty clean and had no flash but it did have a hollow base. There is no aft bulkhead. I took the provided screw eye and screwed it into the provided hole.

When the coupler joints were judged "dry enough", the two BTs containing the couplers were glued together and rolled around to ensure straightness.

The kit came with a single launch lug and instructions to cut it in half. Instead of doing so, I opted to use the full length of the lug and add a second lug. Since it was handy and because this is a long rocket that may tended to try and twist the lugs off, I opted for a 6" long one from FlisKits. A length of rod was used to align them as the were glued in place.

A few days were spent filleting the fins. The initial round on each fin was with finger smoothed yellow glue. After that had dried, I built up the fillets with white glue since it does not shrink as much. When the filleting was done, I glued the bottom BT, the one with the fins, to the other two and let it dry. The rocket was now assembled.

Finishing:
The fins had already been sanded down prior to installation so the rocket was ready for priming. I set it up as best I could in my spray booth but could tell that this was going to be a two part job. The bottom of the rocket got a coating of Kilz and, about a half hour later, it was dry enough to the touch to pick up. I carried it outside and sprayed the top.

After the Kilz dried in about 2 days, I sanded the rocket down and set it up to spray white. I decided to follow the face card art and was only going to spray the lower third. I did not bother to mask anything since the white would be easily covered up.

After drying, most of the white looked fine but one side was very ugly. I think I got what is called "orange peel". I took the rocket back to the bench and sanded down that side then set it in the booth to spray again.

After the white paint dried a second time, I inspected the rocket and all seemed fine. That being the case, I masked off the bottom and began spraying red on the top.

The rocket got 2 coats of red and was allowed to dry overnight. Then came the unmasking. The lines were good and I was pleased.

At least I was pleased until I got to the decal. It wasn't a decal. It was a crack and peel monstrosity. For a sticker, it was of good quality and it came up from its backing easily enough but positioning a large sticker around a curved surface is not a process at which I am adept. I also realized that my change in the position of the launch lugs was problematic. The upper lug interfered with wrapping the sticker. An appropriately sized slice was cut out of the sticker with a razor, burnished it down and I was done. 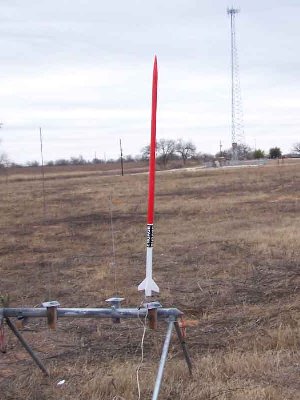 Flight and Recovery:
The maiden flight took place on a very windy day. By all rights, I should not have launched it if I cared about the rocket at all. In fact, I had already decided that I would not launch it. I was persuaded to change my mind by a young girl from my church. She had never been to a launch before and had been enjoying this one. She wanted to see it fly and, frankly, so did I.

I put in a 15" chute and prepped with a C6-3. I had lots of misgivings as I watched it oscillate on the rod. Then the countdown terminated and up she went.

There was a lot of wind. Even so, there was no weathercocking. She went up beautifully and deployed at apogee. She then drifted quite a ways but came down without a scratch.

A video of the flight can be found here.

Summary:
I had my doubts about this rocket early on but the appearance on the pad and, especially, the flight put those worries to rest. This is a good rocket. It might not be the best of its class, but it is certainly a respectable contender.