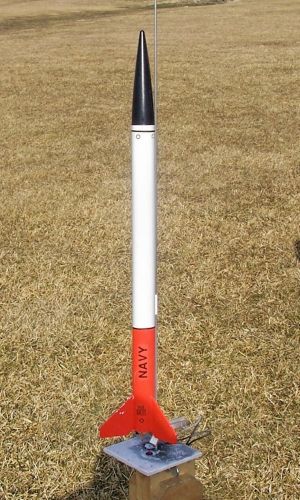 Brief:
The Lamprey was one of the kits that Custom released around 1992 as part of their "second wave" of kits. This a rather sharp looking design, even thought it's your basic 3FNC model. The Lamprey, named after an eel, last appeared in the Custom Rockets catalog in 1998. I purchased and built mine in the 1993-94 time period.

Construction:
The Lamprey was supposed to resemble some sort of air-to-air missile. It was presented in an industry-standard plastic bag with a cardboard header. The instructions were lacking somewhat in detail but covered the basics.

The main airframe is an 18" length of 1.325" OD kraft paper tubing--essentially it's an Estes BT-55. In fact, it is quite possible that all of the components of Custom kits at this time were of Estes origin. The fins in the kit were (or should I say, are) of good quality 3/32" balsa, die-stamped onto the wood. There was no laser cutting yet. The rest of the parts are standard design: 2.75" piece of 18mm tubing for the motor mount, a steel motor retention hook, and two 20/50 paper rings. The rubber shock cord is held in place with the familiar tri-fold paper mount. The nose cone is of interest. It's hollow but of a standard shape. I'd say it compares to a SEMROC BNC-55X.

I used yellow aliphatic resin glue throughout in construction. There were no "gotchas" at all in this build. The parachute was somewhat unique to Custom at the time. It was an 18" chute of a silver mylar-type material. However, I recall that the chute had a somewhat slick, non-mylar surface.

Finishing:
I finished mine in the colors shown on the kit card. I used Krylon gray primer followed with a couple of coats of Krylon white. Using my officially calibrated eyeballs, I masked off a portion of the lower body, and sprayed it with Testor's Competition Orange. The nose cone was sprayed with Krylon glass black. The water transfer decals, which were of good quality, were added as per the kit card. After giving the model and decals adequate time to dry, I shot the whole thing with Testor's clear glass.

Recovery:
The only problem I've encountered in flying the Lamprey was the kit parachute--it didn't last past the first flight. The tape tabs provided with the kit did not adhere well to the rather slick surface of the parachute material. It's now long gone, replaced with a standard plastic chute. If built with care (like making sure the fins are on straight), the Lamprey is a high flier even on B4 and B6 motors.

CONs: It's out of production!