Brief:
EAT's latest offering is an amazing 3 in one rocket. Look! Up in the sky! It's a cluster! No, it's a 24mm transition rocket! No, it's a sleek futuristic space plane! You can fly 3 completely different configurations on the field the same day using this very innovative design concept. 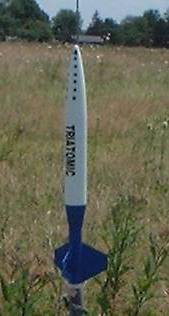 Construction:
I was initially hesitant to pop for the $36 (includes shipping) kit, but when I started looking over the parts and part list, I began to appreciate the value in this. You really do get for the most part, three different rocket kits in this deal, and will have a significant amount of time invested in the build.

My kit was one of the early ones, and had two different (and conflicting) parts lists. A summary of what was included in my package includes:

All parts were very good quality and packed neatly in a surprisingly small box. Generally, I find EAT's instructions to be among the best out there--clear, easy to follow, and with plenty of color photos to help along the way. In this case, there was a supplement sheet that overrode some of the standard instructions. The overrides were improvements in the design and construction, though it did make it a bit confusing hopping from "main" to "supplemental" instructions throughout the construction.

Construction begins by cutting the fins for all versions from the basswood stock. I enjoy cutting fins but got a little weary after cutting out the 10 different fins (3 of which are elliptical). I just had to keep reminding myself that I was building three rockets, not one. At least with the basswood, there was very little sanding and filling of grains necessary.

Next up is construction of the upper rocket body, which is common to all configurations. This starts with adding nose weight to the nose cone. EAT provides about 40 BB's for weight, all of which are needed, along with a healthy dose of epoxy to keep them packed into the nose cone. As the epoxy starts to set, you add an eye bolt for shock cord attachment and allow plenty of time to dry while you work on the rest of the kit.

The upper body is a simple 5" length of BT-60 tube, which gets a launch lug attached. All of the fins for stability are on the interchangeable lower sections.

The last phase of the upper body construction is the hardest, and most critical aspect of the project: the parachute cup. The parachute is housed inside a TC-60 coupler "can", which pops out of the BT-60 body tube, allowing for wadding-free flight which reduces prep time. This also takes some of the sting out of the extra work required to swap lower sections.

The parachute cup is built by gluing a bulkhead on one end, punching a pressure relief hole in the can, and sanding until you get a good, smooth fit inside the BT-60. Given the summer humidity and likely flow of hot ejection particles into the upper body, I think the "optional" step of coating the outside of the coupler and the inside of the BT-60 with CA and sanding smooth is a critical must-do step. In fact, to get a smooth movement, I wound up peeling off a layer of paper from the coupler. The resulting "rough" finish, even if sanded, would never have worked. Applying the thin CA enables a much smoother finish.

After finishing the upper/common body, you can then move on to work on the lower sections. The first and easiest is the transition body. EAT provides a very nice balsa transition piece. You carve out a small groove and hole in this, which enables the Kevlar® to pass through without causing a dimple on the body tube. A Kevlar® tether is then passed through the hole and epoxied into place. This transition is then bonded to a BT-50 body tube, and 3 fins attached using yellow glue. The instructions offer a good tip for maintaining good fin alignment while waiting for the glue to set, taping the fin from the tip to the body tube. This looks like it would work for the first, possibly even the second fin, though I personally use a jig for most of my fin alignments. 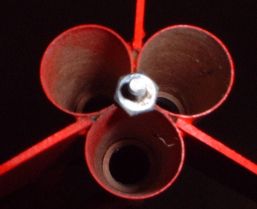 The cluster version is also fairly simple to build. You start by bonding two BT-20 tubes together, then inserting a piece of threaded rod into the seam and layering in a healthy dose of glue. This threaded rod will enable a very simple and effective method of motor retention--a simple nut in the center of the triangular cluster (see photo). Once the threaded rod is in place, the third body tube is bonded.

The upper portion of the cluster version consists of a centering ring tacked on to the top of the BT-20 cluster and reinforced with plenty of glue and some cardstock brace pieces. While you're pouring on the glue, you can also attach the Kevlar® tether for shock cord/recovery.

To finish up the cluster version, 3 elliptical fins are glued into the joints where the body tubes connect and are mounted on standard 120-degree orientation. 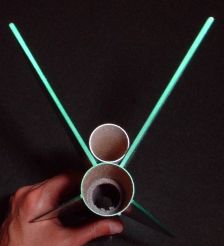 Last up is the futuristic body version, which is probably the trickiest of the three to build. It's a 24mm body, which doesn't exactly plug into the BT-60 upper body, so you have to start by making the adapter assembly out of a TC-60 coupler and pair of 60/50 centering rings. This is glued to the end of the BT-50 body tube, along with the Kevlar® tether for recovery. On the other end of the body tube, 4 fins are tacked on, though the alignment is a far cry from the 90-degree approach (see photo). In between the upper fins goes a BT-20 side pod/nose cone. A helpful finishing tip in the instructions warns that if you want to paint this thing two-tone, you should wait until after painting to tack on the side pod--though mask a bond line on each body tube first!

That's about all there is to the construction. I wound up spending around 8 hours on this, sprinkled across several weeknights. On a typical Estes 1-4 scale, I would rate this somewhere around a 3 for skills and challenge, mainly due to the varying fin alignments and construction of the parachute canister.

Finishing:
I followed the EAT sample color scheme for this, painting the common upper body a gloss white, the cluster a gloss red, the transition a gloss blue, and the futuristic a two-tone green base and white side pod. All were preceded by two coats of Krylon primer and a light sanding. After painting everything, I bonded the side pod to the futuristic body.

EAT provided a nice sheet of water-slide decals for playing around with. I applied a few to each configuration, though I found the decals extremely fragile so they tended to break upon application. Use extreme caution when applying these and don't even think about using one of those setting solutions that softens the decals.

The result is a gallery of fairly neat-looking rockets, though I'll admit my paint job was nowhere near as nice as the one Nick got for the instruction photos.

Flight:
The extremely long list of recommended motors on this one covers the gamut of configurations. My transition version measured about 3.6oz and 17.5", and my futuristic came in at 4.9oz and 27", so you can use just about any leftover motors you've got on at least one version of this kit.

Flight prep is a little tricky on these, but once you figure it out, you're in for very quick and simple prepping for each flight. Whichever lower section you select is attached to the upper section by the Kevlar® tether, which is threaded through a hole in the bottom of the chute can. This loop is then threaded through a washer and attached to a snap swivel. The swivel/washer combo prevents the Kevlar® tether from slipping back out of the hole. The chute is then attached to the swivel and packed in the can. The can is inserted into the upper body, lower body inserted into the upper, pack the motor and launch!

I flew a first flight for each version over the course of about 30 minutes at a recent club launch. For the transition, I chose a C6-5, making use of the 18/24 adaptor. Straight up flight, ejection at apogee, flawless path. The second flight was using the cluster version, and I "wimped out" with a set of A8-3's (I had a bunch left over from various Blast Off flight packs). Straight up flight, ejection at apogee, flawless path. The third configuration was the futuristic, which I decided to spank with a D12-3. The recommended delay is a 5 and I think that would have been better as mine was a bit early. Certainly no stability problems for any of these, and with the varying combinations available, you can fly anywhere from 100-2400 feet altitudes, making this a great rocket to take out in just about any weather/field conditions. 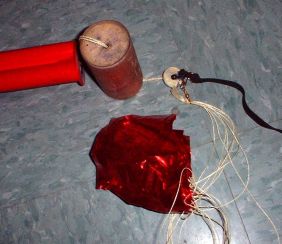 Recovery:
Recovery, in my case, is the real weakness to this kit. I loved the innovation of the parachute canister and am going to try to adapt it in other kits I build in the future. Unfortunately, my 3 flight experience on this resulted in zero chute deployments. The fact that I fly on a large, tall grass field saved the rocket from any damage.

Recovery is supposed to work, roughly, as follows: ejection charges cause separation of upper and lower body sections. As the sections grow apart, the Kevlar® tether is pulled to its limit. When it hits that limit, it begins to pull the chute can out the back of the upper section. Once the can is out, the upper body continues to separate, pulling the elastic/Kevlar® out the top of the can, eventually pulling out the chute. I know this works, as Nick posted a few videos to the EMRR site demonstrating it. Still, despite the fact that I peeled away a layer of paper, sanded down a perfectly smooth surface to the can and inside tube area, and even sprinkled in a little graphite powder lube, the separation forces were not enough to overcome the nearly vacuum seal between the chute can and the body tube. The instructions call out for a vent hole in the fin can, though I think an additional vent hole or two out the body tube would be in order, and will try to experiment with that in the weeks ahead.

Flight Rating: 3 out of 5 Yeah, it might be a bit generous, but the FLIGHTS were great. It was just the recovery that was a problem, and the soft grass field didn't result in any damage. I figure less than 3 would have to be unstable.

CONs: recovery not reliable enough, and might have been better off with a basic nose cone ejection approach.