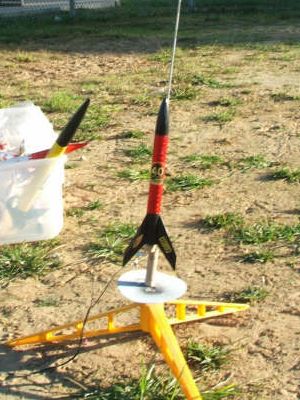 Brief:
The Astron Alpha IV was a specially produced 40th Anniversary version of the Alpha III that had a red prismatic body tube, black plastic nose cone and fin can, and special sticker decals.

Construction:
Like I said, this is basically a prettied up Alpha III released as a 40th Anniversary commemorative rocket. I came across mine when looking for a quick building kit to fly when visiting my in-laws in February of 2001. The Alpha IV certainly fit the bill. I was finished with it in less than an hour using wood glue and gel CA.

Since construction on this kit was mostly a matter of constructing a motor mount and mating it with the body tube and plastic fin can, there really isn't much I can say. I used wood glue to put the motor mount together and gel CA to mate the body tube and fin can. Since I was not yet wise to the ways of Kevlar®, I went with the standard Estes folded shock cord mount.

Finishing:
With this rocket, finishing is merely putting the stickers in place. I did a nice job and I can honestly say that it was pretty easy. 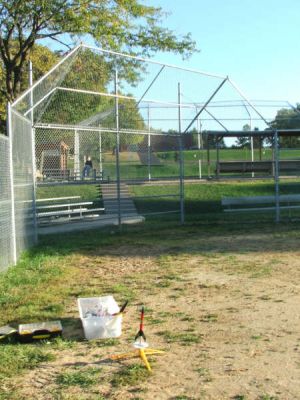 Flight and Recovery:
The first flight for this rocket was on a bright, sunlit day when the daytime temps barely made it into the teens and the winds pounded temps well below zero. It was so cold that all prepping was done inside the vehicles with the engine running and the heater on high. To give you an idea of how rusty I was, I had forgotten to buy motors when I bought the rocket the previous day. Luckily Tony had a C6-7 that he had no plans for. The rocket leapt off the pad just as I remembered and managed a respectable height despite weathercocking badly. With the unreefed chute the weathercock barely helped as the rocket recovered in a neighboring cornfield somewhere between a 1/4 and a 1/2 mile away. The recovery walk across the frozen fields was bad, but with the wind at my back it at least went quick. The walk back was miserable. Needless to say, I was frozen and made this my only launch of the day. Still, it was well worth it and served to allow the bug to bite again, this time much more deeply than previously.

The second flight came at NARAM 43 in Geneseo, NY. With the field being another of the extra large variety, this flight was also on a C6-7. Once again I experienced windcocking, and once again it made no difference as the recovery walk was again marathonesque, but at least this time I only had to contend with August heat. (I'll take heat any day.) The rocket recovered at the edge of the cornfield, one of several such flights that I logged over the two days that we spent at our first NARAM. 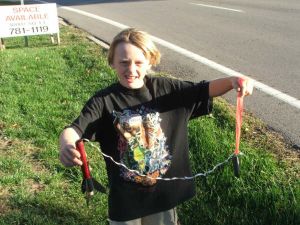 Subsequent flights have all been by special request, always after one of the kids who always seem to be drawn by rocket activity at B6-4 Field spots the unique body tube at the bottom of my small field box-o-rockets. While I find the flights to be something of a bore, the kids never fail to get excited and the recovery stampede is always an adventure. One of these days the Alpha IV is going to die the death of a warrior under the feet of a half dozen 4th graders.

Summary:
It's difficult to find fault with the Alpha IV due to it being a more colorful version of the Alpha III, but the one thing I'd nick it for is the fragile body tube. While the prismatic covering looks good, it begins to unravel after only a few flights and never looks the same once you start securing it with tape. The Alpha IV is a competent performer, which is to be expected from a design that has been around as long as this one.