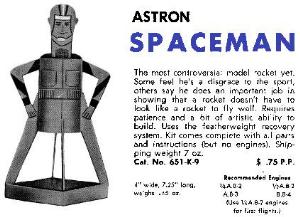 This is a Clone of this OOP kit.  We call it the Rocket Boy, I would consider this a level 3 kit since you have to cut out all your balsa pieces, We where looking for something different and found this plan on JimZ website

Construction:
The kit called for the following parts:

The instructions where very easy to follow with quite a few pictures.
First thing the instructions had you do was to trace all the patterns on the balsa stock. 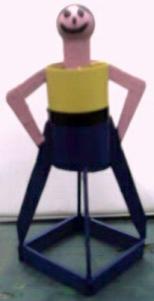 After you had that done then you cut the pieces out and started the assembly of the rocket. The motor tube with the 4 pieces of balsa on it went together very quickly. After that was done you glued the motor tube into the bt-60 tube.

The next thing you did was to glue the 2 legs onto the body tube.

Then came the only tricky part of the whole assembly, gluing the body with the legs on it to the square base of the rocket and adding the 2 supports.

Finishing:
This was easy to finish we just went with the same colors that where in the plans.

Flight:
First flight was on a C6-3 only because at the time we only had 1 A engine and it wouldn't ignite. It was a nice straight flight with this motor however on ejection we lost the Rocket Boys head. We had only used white glue on the head to the body connection.

Second flight was on a A8-3, not quite as stable as the flight off the C6-3 ,and at motor ejection the rocket picked up more speed when it kicked out the motor with a load pop.

Recovery:
Recovery on this was great nice tumble to the ground.  When we launched it on the C6-3 we had thought it had broken into pieces but it was all there but the head.

Summary:
Overall it was a fun clone to build and fly and at the 2 launches we have gone to, it has gotten a lot of attention.  We liked it so much we built a 2x upscale of it we call Rocket Dad that uses parachute recovery.

Flew my spaceman for the first time with a A8-3. It veered off at a angle after leaving the launchrod. Not sure if it windcocked or if it was fin misalignment on my part. It seemed to straighten up though about the time I lost sight of it. I did hear the loud pop like Herb mentioned. Searching the sky, I picked up the spaceman coming down head first. No tumble recovery here, he was coming down like a lawn dart. He went behind a hill and impacted. I was sure that I would find him in pieces but he hit a dirt clod and was totally intact, head and all! This is a very imaginative odd roc that Estes never should have discontinued. Thanks to Semroc for bringing it back.