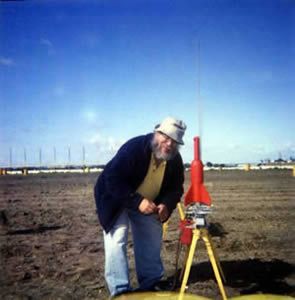 I modified the Big Daddy kit to replace the stock nose cone with a fixed nose cone made from a PET soft drink bottle; parachute deployment is from an open "mortar" mounted on the bottle opening. Rationale? I swiped the nose cone from a family member's Big Daddy kit to use in a building project, and had to figure out a way to replace it, or be a "Bad Dad".

The bottom 4" of a PET plastic bottle was cut off, and 6" of Estes BT-55 tubing is epoxied to the top (after removing the screw cap - Duh!). This serves as the parachute mortar. A 24" piece of shock cord is glued to the bottom of this tube (I initially used 3/8" elastic, but this was a mistake - use parachute cord of nylon boot lace - see below). An 18" LOC nylon chute is attached to the end of the shock cord to complete the recovery system. Use of a small size Nomex protection pad (tied to the cord) is a good idea, since wadding can not be used in the normal way. This assembly is then epoxied in place atop a stock Estes Big Daddy body tube, and centered with "Q-tip" stringers coated with wet epoxy and inserted between the body tube and the plastic bottle; you need this also to create a gas-proof seal with the fixed nose cone (see photos and the "Aquafina" article). The gas-proof seal is completed by packing the remaining space between the lower edges of the bottle and the body tube with bits of cotton and epoxy. The rocket is completed generally by following the Estes instructions for fin and motor tube assembly, with the following modifications for use with 24mm Aerotech AP motors up to F21: 1) the cardstock centering rings are reinforced with 6 pieces of Popsicle sticks liberally epoxied in a geodesic "Star-of-David" form (see photo), 2) the fins are reinforced with a 1/64" plywood doubler epoxied on one side, and 3) sticks of traingle balsa stock are epoxied to both sides of each fin root. For balance with the heavier motors, 4 x 1/4 oz. fishing sinkers were epoxied to the parachute mortar 1/2" from the top (see photo). An alternative would be to use 6" of thin wall 1.32" PVC plumbing conduit in place of the BT-55 tubing, and skip the nose weight. BadDad was painted with Flat Red spray paint; no primer was used.

I'm also using this modification to test nose-mounted open parachute mortars as a deployment system (see "Aquafina", that I presented recently on this website). Use of inexpensive PET plastic bottles provides a route to very low-cost nose cones for scratch building projects. Because I intended to fly "BadDad" at high speeds to see how well the open "parachute mortar" would hold up. I also reinforced the stock kit by using 5-min. epoxy throughout, by doubling the balsa fins with 1/64" plywood on one side, by reinforcing the centering rings, and by adding triangular balsa strips at the base of the fins to more securely attach the fins. Bad Dad is intended to fly on F21-6, F24-7 and E30-4 motors; it will still fly on D12's, but barely. 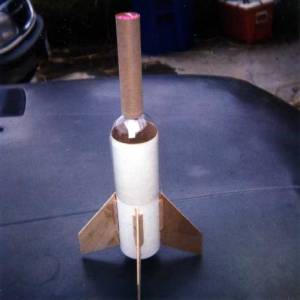 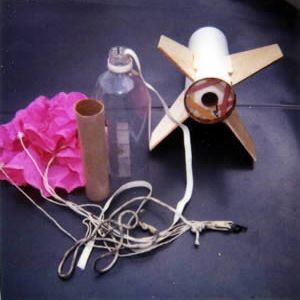 One of the most excellent components of the Estes Big Daddy is that great nose cone, which they don't seem to want to sell separately. Its light, and I like to use it for my scratch building projects. Now I have a way to use the rest of the kit! 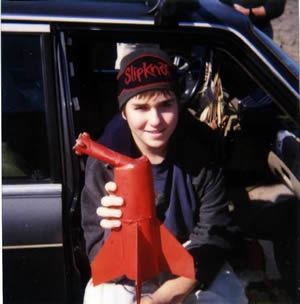 Boost on an F21-6 was fast, straight and noisy, with a flame at least as long as the BadDad. I burned up my last 3 F21-6 motors flying Bad Dad; on the last flight, separation occurred as the shock cord tore apart near the PET bottle attachment point, and it came in ballistic from about 1000'(what sims say for the F21-powered BadDad), core-sampling (literally!) the island sand. How many times to I have to remind myself not to use underpants elastic shock cords with Aerotech motors! This happens every time I forget! Underpants elastic with Estes motors only! Damage to Bad Dad was limited to the accordioned mortar and PET bottle (see photo). The "stock" Big Daddy components were unscathed.

I cut the crushed PET bottle away with an Exacto knife, and simply epoxied on another PET bottle with more Q-tip stringers over the remnants of the old one, and replaced the parachute mortar, this time using 24" of black USMC nylon boot lace as the shock cord. It is back flying again - I doubt that a stock Big Daddy would have survived a core sampling as well.

PRO - Flight properties seem every bit as good as would be expected from a stock Big Daddy, except that I got to use the Big Daddy nose cone for something else. Zero risk of chute fouling with this "mortar" method -- either it deploys or the rocket explodes! Strong construction (fixed nose cone and stringers adds strength) and belligerent anti-tank missile looks (I think). Good flyer on E30 and F21 motors, and FAST. Would work well with 29mm mount and motors (F50 or G35).

CON - Somewhat heavier than a stock Big Daddy. Must use a Nomex protector in place of wadding (which would fall through and rattle around inside). I doubt that open nosed mortars are a good idea for rockets flying above 400 knots, but a small nose cone (BT55-size) could be easily fitted to Bad Dad.

No more underpants elastic for me (except in underpants, where it belongs!