Brief:
This is an OOP "Sci Fi" rocket that can still sometimes be found. It consists of a main body tube surrounded by 18 "storage pods". It has an unusual plastic nose cone. Estes defines it as "Galaxy Class craft used in exploration of distant star systems". Estes indicated that it is skill level 4.

Construction:
The rocket consists of a main body tube with three sets of 6 tubes attached around the main tube to act as storage pods. They provide card board punchouts to glue onto both ends of these tubes to make the pods. Other wise it is a standard Estes product with three balsa fins, an engine hook for the motor mount, an 18" parachute, and too short of a shock cord. The rocket also comes with a plastic nozzle for display, but it has to be removed to actually fly.

The instructions were basically good except for one major fault. The box picture and the instructions show that the fins are mounted above the end of the body tube, but no where does it show by how much. I did some scaling based on the box pictures and mounted the fins so the bottom edge was 7/8" above the end of the tube. Aligning and keeping level all the 18 pods is a bit of a challenge. This is probably the most difficult part of the construction. You need to take your time and allow the glue to dry from 1 tube before doing another. I'm also a little concerned about the sturdiness of the tube mounts - there is no easy way to add a fillet to strengthen these joints. If I was to build another one I would probably try an epoxy instead of the typical white glue.

Finishing:
The fins are large and need to be sealed. I used Elmer's Fill and Finish for this. The rocket is basically painted gloss white with a section of black for the nose cone and some black and silver on the display nozzle. Care must be taken when spray painting to avoid dark areas where the paint was shadowed by the pods, yet not spraying so much as to cause runs. I started with some Krylon primer and followed with Krylon Hi-Gloss White. I started by light coats to get to the "pod shadows". Once I was satisfied I then finished the rest of the rocket with a couple of coats of white. The rocket comes with a nice set of water transfer decals (2 sheets). There are "solar panels" for the fins. My only complaint here is as typical of Estes, there are not enough decals to do both sides of all the fins, just enough to match what you see on the rocket from one angle. Again, getting the decals on the pods to be straight and even takes some time. Do a few and let them dry before doing more. The final rocket comes out looking very impressive. It gets lots of attention from people at the launch site. 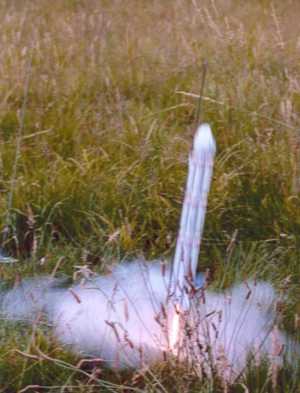 Flight:
I prepped the rocket with some standard Estes wadding and its 18" parachute. I loaded a D12-3 engine. The engine hook grabbed the engine nicely. I had been demonstrating model rocketry to a local squadron of the Civil Air Patrol. I had launched various smaller rockets first which helped me to get a feel for the winds. I finally got out my Explorer Aquarius for the last flight. After a 5 second countdown, the rocket took off fairly slowly and majestically. It picked up speed and flew fairly straight with some weather cocking.

Recovery:
I used the regular Estes shock cord mount, but I did replace the shock cord with one that was twice as long. The parachute ejected at apogee. I would not recommend the D12-5 that Estes suggests - the rocket would be too low when the parachute came out. Due to all the pods hanging on I would not try a stronger engine (maybe use epoxy vs. white glue). The rocket drifted a ways on the 18" parachute, but made a nice soft landing without any damage.

Summary:
This is a super looking kit that flew very well. Some care must be taken during the construction and finishing, but then it is rated as a skill level 4. The only real problem was the lack of the dimension for the fin placement.