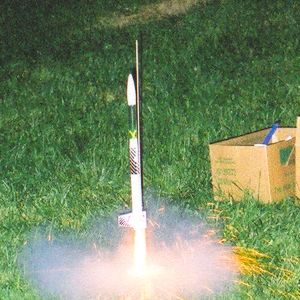 The HiJax is an almost ready to fly payloader sold by Estes from 1995 to 2000. Back in 2001, my brother in law and I had what we thought was an incredibly original idea: a night launch! We decided on a date to try out "our" idea when he was in town visiting one weekend and had purchased Estes HiJax rockets and glow sticks for the occasion. We soon came to find out that night launches had been around for a while, but the HiJax turned out to be a great rocket for the task at hand.

The HiJax isn't quite an RTF rocket, but its construction has been simplified to the point that it's the next best thing. The motor mount tube slides into the plastic centering structure and the finished piece is then slid into the body tube. Care must be taken to ensure that the fin slots on the centering structure line up with the fin slots in the body tube. The fins are then glued into place. I used TiteBond Gel CA in constructing the motor mount and fins then wicked thin CA into the fin joints to further toughen things up. Time will tell how the heat of the motors might affect things, but at first glance it seems to be a reasonably sturdy power plant.

The one "gotcha" on this kit is the same as on every other Estes kit: lack of Kevlarin the recovery system. The recovery system in the HiJax is constructed like many of the other almost RTF kits and is destined to be a weak link in this kit. Even though I considered the HiJax something of an expendable rocket, I still wasn't thrilled with the idea of mounting the already way too short shock cord through a hole in the body tube. I'd seen this method fail too many times to not make at least some kind of improvement. I hadn't yet started using Kevlar when I built the HiJax, but I had started replacing the stock Estes shock cords with much longer ones made from sewing elastic that I purchased at a local sewing store. I lengthened the shock cord to three feet and tied it off as shown in the instructions. Not great, but a lot better than it would have been.

The HiJax has a pre-colored white tube, so no painting is needed unless you're the kind of person who can't let well enough alone. Just stick the hot pink and black decals in the appropriate spots and the HiJax is ready to go. All things considered, the rocket turns out looking pretty sharp as the decal graphics blend well with the otherwise all white color scheme.

I made two flights with the HiJax at out at the night launch on B6-4 Field. The first flight was on an A8-3 and was such a low level flight that the parachute barely had time to unfurl. The flame was visible through the entire flight, which was pretty cool to someone who had only flown previously in daylight. The rocket hit hard on the ball field, but the plastic is too tough to be cowed by a little hard packed dirt and all that I had to do before the second flight was brush some dirt off.

The second Night Launch flight was on a B6-4, which may have been a little too much engine for a rocket of this size. Nonetheless the flight was perfect, with the glow stick and the engine flame making tracking easy despite the height. Recovery was barely 50' from the pad on the calm night.

The third flight was a mistake from the start. One of the kids my son had invited along wanted a toy he had brought along, Alien Bob, to be flown in the payload section. Since we were flying at the expansive VOA on a calm day, I chose what I thought was a C6-5 for the flight. The flight was so fast and violent that I knew something had gone wrong. Ejection came way early, and the chute was completely ripped from its shroud lines. The rocket came in hard and broke the payload section on contact with the ground, but Alien Bob rode the whole thing out like a champion. The parachute was never seen again, and the post flight inspection showed why. I had mistakenly grabbed a C5-3 instead of a C6-5. Oopsie. Sorry there, Alien Bob.

The fourth flight was on a B4-4, and while not a night flight, it would have been the perfect motor combination for future night launches at B6-4 Field. The flight was noticeably lower than the B6-4 and left the rod quite a bit more slowly. Problems arose when the parachute was toasted by the ejection charge and singed into a ball shape. The rocket landed hard on the packed dirt of the soccer field, breaking a fin and cracking the clear payload section. It's fixable and flyable whenever the urge strikes.