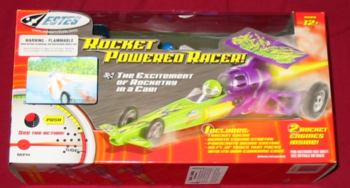 Construction:
On my last trip to Wal-Mart looking for new Estes kits, I noticed an attractive box on the self for the new Estes Blurzz Rocket Powered Racer. The box had a hologram of the racer in action with a button under it, so I pushed it. The sound of race cars filled the toy section, and the announcer said:

"Race at the speed of sound with Estes Rocket Powered Racers!"

"Estes Rocket Powered Racers are super fast, run down 90 feet of track, and stops with a parachute!"

"You can race alone, or side by side with friends!" 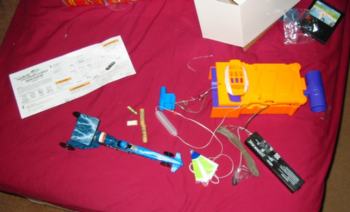 At first I was a little skeptical. How well does this work? How safe is it? Is it worth the $20 Wal-Mart wants for it? I decided to give it a try, for the sake of the rocketry forum and EMRR. What! Only two motors…better grab a couple packs of A10-PT motors.

When I got home and opened up the box, I said to myself, what is this tangled mess? The motor mount, parachute, shock absorber was attached to the string, and both ends of the string was connected to a halve of the plastic container used as the case. Also, the launch controller is tied to the base of the case. I was concerned that it would be very easy to get everything in a huge tangled mess. The motors look like A10-0T's with the top stuffed with clay, and the two that came with the set had the newer gray clay nozzle and plug. The A10-PT motor pack contained four motors, four igniters, and four igniter plugs, but they used the older white clay, which already started to disintegrate because the motors were all coated with white powder.. 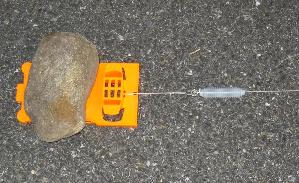 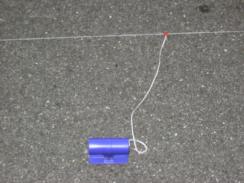 Enough worrying, time to get this thing set up. This is the first rocket set that I actually had to read the instructions, and keep referencing them to figure out how this is supposed to be set up. Here is how the setup works.. The halve of the plastic case with the controller connected to it is obviously the starting point. I place that on the driveway and start unwinding the string from the lid of the case as I walk toward the other end. Once the string ends, I place the lid on the ground and secure it with a rock (instructions say to used a full soda bottle). The plastic bumper is placed against the lid, just in case the car makes it this far. The handle of the carry case is then placed about 15-feet from the ending point, and the small parachute is placed in the grip of the handle. Finally, I went back to the starting point, and pulled on it till the string was nice and taut. I secured the base with another rock.

Flight (err, Motion):
Prepping the car is a bit tricky, but after shooting the car off six times, I got this procedure down to a fine art. Turn the car upside down and slip the string through the forward guide. Give the string some slack, and take the motor mount, and install an A10-PT motor. I then install the igniter and the green igniter plug, bend the igniter leads in a 90 degree angle toward where the top of the car is. Then, squeezing the two tabs on the motor mount, I mate the motor with the car, making sure the tabs snap in place. Then I bend the igniter back, making it easier to connect the igniter clips. To fire off the car, I decided not to use the Estes controller, opting for my 12-volt relay system instead. After connecting the igniters, making sure that the igniter leads don't short with each other and the axle of the rear wheel. Once the car is set up, I pulled on the base to make the string taut again. My racer is now ready to race.

My Mom saw me setting up in the driveway, and came outside and ask if I bought a new toy? I admitted my shortcomings. She watched the first run (See the video.). Next thing I know, she wants to push the launch button! So I let her try, but the rocket burned through the string. What happened was my fault. I place the base on the ground upside down, causing the string to become closer to the flame. I fixed the problem for the next launch, and I got a good video of the racer coming to a stop in front of the camera.

My mom left to check on dinner, but I stayed outside to drive the car three more times.

Summary:
Overall, I think that the Estes Blurz Rocket powered racer is a fun package. Care has to be taken to make sure the racetrack is free of debris, and the line remains taut. Also, inspect the track line for any damage before firing off the next race, Estes provided an 800 number to get a replacement string if it becomes damaged. Do not think about running the car without the line—thrust me on this one.