Brief:
The Estes Mega Sizz’ is an OOP kit that was available during 1988 through 1990. The rocket is really nothing more than a 4FNC rocket using a BT-60 body tube. I am a fan of rockets with that tube size so when I had a chance to get the Mega Sizz’ in some kits I was trading with a fellow rocket enthusiast, I jumped on the chance. 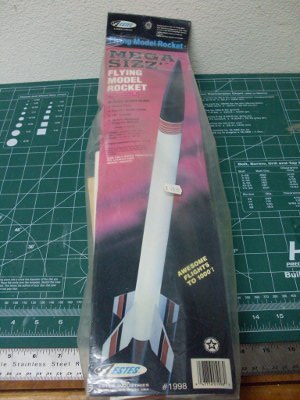 Construction:
The plastic bag the kit came in had been opened once but was now stapled shut. All the original parts were still in the bag. They include:

All the parts were in good condition with the exception of the shock cord, It was turning yellow with one end kind of brittle from age I guess. 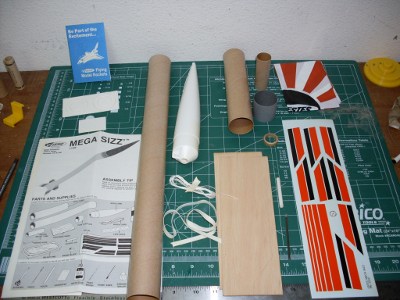 The rocket is simple to build and does not require much time to complete the 12 steps in the instructions. I built the rocket as designed with one exception. Since I needed to replace the shock cord, I choose to use Kevlar® string to anchor it to the rocket instead of the standard tri-fold paper method. Since the rocket has two body tubes joined by a coupler, I decided to add an ejection baffle. I had recently purchased a bulk pack of baffle kits made from heavy cardstock. I am not too impressed with them but thought this would be a good rocket to test them on. To strengthen the cardstock, I applied a thin coat of epoxy to each side. I also attached the Kevlar® string to the baffle.

Finishing:
The paint scheme for this rocket is a black nose cone with white fins and a a white body. Since the nose cone is plastic, there was a seam the needed to be sanded down. It also had a couple small indentation in the plastic at various spots. I used several coat of grey auto primer with sanding to make it smooth again. Then it was painted black. The body tube and balsa fins received some Fill ‘N Finish then a coat of Kilz Original spray primer. After that, I painted the rocket with a gloss white. 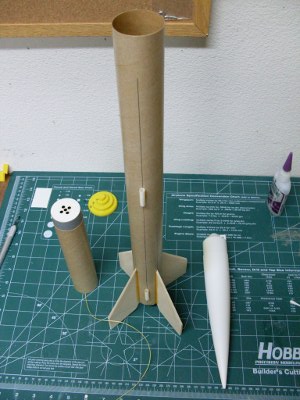 The decal were is very good condition for being almost 20 years old. There was sign of discoloring. The sheet received a coat of clear spray before they were put on the rocket. There are not a lot of decals for the kit. The only tricky part is trying to line up the fins strips on each side of the same fin. 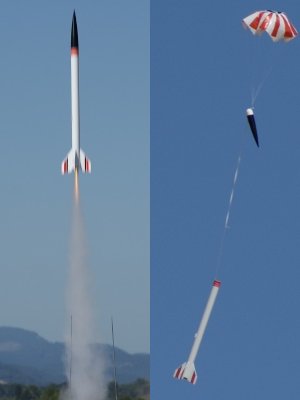 Flight:
I loaded the Mega Sizz’ with a D12-5 for the first flight. This is the only recommended motor for this rocket according to the packaging. The rocket leaped off the pad rather quickly. I almost missed getting a picture of because of its speed as it left the launch rod. The rocket should fly to 1000’ according to packaging but I do not think it flew that high.

Recovery:
The rocket uses a large 16” plastic parachute. I really like the look of the older orange and white striped chutes with the black and white Estes logo on the top. So much better than what is being produced in today’s kits. I did not load the rocket with any recovery wadding since I installed the ejection baffle. There were no signs of melting plastic on the chute so it worked as planned. The rocket safely drifted back to the ground for the end of a perfect flight.

Summary:
The Mega Sizz’ is a fine flyer with a sleek but simple appearance. Since the kit is OOP, you might be hard pressed to locate a sealed bag. The kit does appear on Ebay every once and a while. The price is usually more than $20 dollars which is too much for this kit in my opinion unless of course you are a collector of kits. As a 4FNC rocket, I consider this a nice addition to my flying fleet and happy that I was able to have the chance to trade for this kit. The plans, instructions, and decal image can be found at Ye Olde Rocket Plans (http://plans.rocketshoppe.com/) and the nose cone (PNC-60RL) is available in balsa from Semroc so it should not be too hard to clone this kit.