Brief:
I received these plans from NAR and built this as part of my NARTEK Silver achievement. In addition, this was my first cluster rocket. During the construction I made one modification, replacing the payload section with plain BT-60 body tube. The paint scheme represents the classic struggle of good vs evil--I will let you decide which team represents good and which evil. Our family is divided.

This was a pretty simple build. Body tube, nose cone, 4 fins, and engine mount. The paint scheme actually took longer to paint then it took to assemble the rocket.

Engine Mount: I used the 3 18mm engine tubes glued them in a triangular shape, gluing each to the other. I traced this triangular tube shape on to centering ring material and then traced the outer tube diameter. I cut out 2 engine mounts. I mounted the 3 tube sub-assembly and bulkheads. I choose not install engine hooks and use tape to hold the engine in place.

Fins Construction: I used the templates included in the plans and cut the fins from 0.125" fin stock. I rounded the leading edge and filled the flat surfaces with thinned Elmer's Wood Filler. I sanded the fins with 220 grit sandpaper, filled, and sanded again with 400 grit sandpaper until smooth.

Main Body Tube Assembly: I mounted the engine subassembly into the main body tube leaving the engine tubes sticking out about 0.375". Next, I mounted the fins 90 degrees apart and added fillets to the fin tube joint.

Finally, I used the traditional Estes shock cord mount to attach the shock cord to the main body tube. If I had to do this over, I would attach this to the engine bulkhead.

Nose Cone: I added ~40g of nose weight to ensure the rocket would be stable.

I found the images on the internet and printed these on to Expert's Choice Decal Material. After the decals, I applied 3 to 4 coats of clear coat. 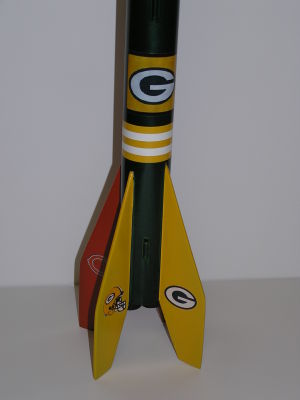 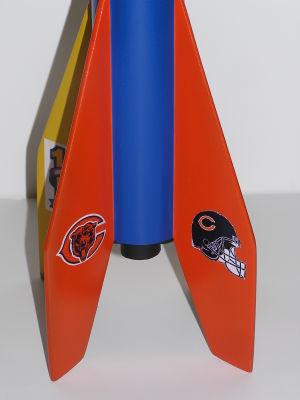 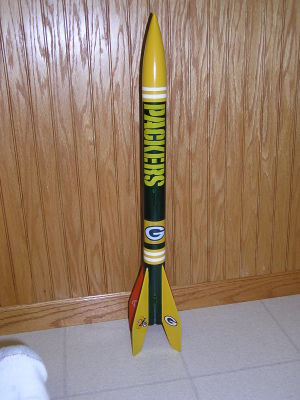 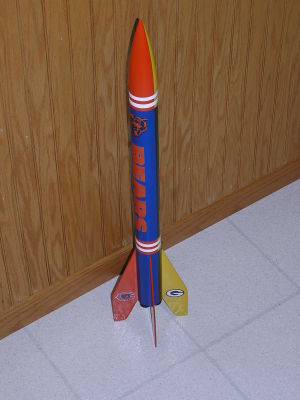 Flight and Recovery:
The flight prep was your basic rocket prep. Engines installed (taped in place), dog barf added, and put in the folded parachute. I installed the igniters. After reviewing the wiring diagrams, I chose to make a 2 jumper sets (basically 3 wires with alligator clips, twisted together).

I used 3 C6-5s for the first flight. Launch was nice and straight. It went a lot higher than I anticipated. Ejection was a little early, but overall it was a very nice flight for my first cluster rocket. The next flight was on C6-7s. This flight seemed to fly much higher and it took about double the time to land.

Summary:
This is a great rocket especially if you have not attempted a cluster. I would highly recommend making jumper wires to attach the igniters rather then twisting them together as shown in the wiring diagram.

I would make two changes if I rebuilt this rocket: replace the nose weight with an engine baffle and change the shock cord mounting attachment method.

This review is actually for the BT-60 Estes Ranger. The 1955 kit is actually a BT-55 based rocket that only uses the Ranger name.