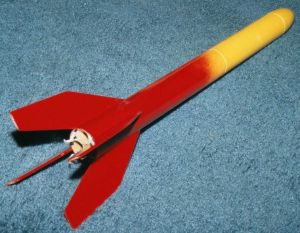 Modified Estes Ranger - a three motor cluster rocket with a payload section. My version includes a baffle and uses motor hooks that were not part of the original kit.

I was looking for a kit or a plan that would be suitable to fulfill the NARTREK Silver cluster flight requirements. This look alike to the Big Bertha would be a great addition to my fleet if painted in a similar scheme to my venerable Bertha. The plans were available from the Jim Z web site in Adobe format. I was already placing an order for some parts for another project from the Balsa Machining Service, and added the correct nose cone and balsa bulkhead to the order. The rest of the parts were found at my local hobby shop.

There aren't a lot of difficulties involved with building this classic "kit." All of the parts are very easily found at the local hobby shop if you don't mind plastic cones. One could very easily adapt a Big Bertha kit and a package of motor mounts into this rocket (two mounts are provided in a motor mount kit). You will also need a bulkhead/tube joiner to create the payload bay, but you could also just leave out the bay part and produce a cross rocket: a clustered Big Bertha. My rocket was made completely from scratch. I purchased my nose cone and payload bay bulkhead from the Balsa Machining Service and both parts are beautifully turned from a good grade of balsa. All of the rest of the parts are Estes parts and were bought at my local hobby supply. Cutting the tubes can be a chore, but I've found that a sharp knife and three or four light cuts around using a piece of paper wrapped around the tube as a guide produce a pretty good result.

The three motor tubes fit snugly toghether in the BT-60. Harry Stine mentions in his Handbook of Model Rocketry that the BT-60 was designed specifically for using three BT-20s in this manner and it's easy to believe because they fit so nicely. The motor hooks work OK in the small gap between the tubes. Simply glue the three tubes together, add the hooks and fill the space with scraps of balsa and sand to a round profile.

An ejection baffle fits in above the motor mounts. Let me add a paragraph here about that since it isn't standard. Baffles protect the parachute from hot gases, burning powder, and hot bits of the clay cap from scorching and burning holes in the chute without requiring wadding. It works by changing the direction of the ejection charge. There are many ways to do this, but I prefer a tube in a tube. In this rocket it's done by centering a BT-50 inside a BT-55 with the ends offset. The two tubes are held in the rocket with a pair of centering rings at the top and bottom that seal them at the same time. The center is left in the top ring and CA was used to fix it there permanently. The BT-50 is joined to and centered in the BT-55 using some strips of scrap balsa. The ejection charge goes through the lower centering ring, up the BT-50, and runs into the disk at the top of the BT-55. It is now forced downward between the BT-50 and BT-55 where it runs into the lower ring. It's now forced back up between the BT-55 and the airframe wall. It passes out into the recovery system bay through slots or holes cut around the outside edge of the top ring.

The payload section and nose cone fit together easily with a little bit of sanding to get the cone to match the airframe perfectly. The plug was glued into the other end of the payload bay and a screw eye was used to attach the assembly to the shock cord.

The fins aren't difficult to cut, nor is there a lot of sanding involved since the original kit called for a simple rounding off of the leading and trailing edges. Gluing them on is standard - marking the tube is easily accomplished using Harry Stine's book, and gluing the fins on with yellow glue isn't tricky either. Rating 4/5 - this is a fun rocket to build, but not overly challenging.

The balsa parts were all filled with three coats of Aerogloss sanding sealer and lightly sanded between coats. The spiral was filled with Elmer's Finish Wood Filler and the whole body tube was sanded lightly with 400 grit paper. A single finish coat of yellow Rustoleum was sprayed on over a white primer coat, and the maroon highlight coat was sprayed on about an hour later.

The original paint scheme is fairly complex and would require at least three masks and hits of paint to complete. The results would be very rewarding, but I wanted the rocket to match an existing Big Bertha. The result is a very simple paint scheme that was very quick and easy to realize - the primer coats took much longer than the final ones.

Rating 3/5 - This could be a tricky rocket to finish and decorate, but I chose a non-challenging scheme.

To keep the parachutes nice, I normally keep them folded flat in a box and use a snap swivel to hook them to the rocket for flying. I picked out a good 18 incher and connected it to the shock cord, folded it carefully and placed it in the body tube with the shock cord going in first. A set of A8-3 motors were installed in the motor tubes with igniters already in place. The igniter wires were twisted together so that all three were in parallel (electrically speaking.) The rocket was loaded on the pad, the igniters connected to the controller, and a short and successful flight was made on September 1, 2001. I had expected a little more altitude, but the rocket flew very nicely with a good, arrow straight, boost. The ejection charge happened a little earlier than I would have liked, but that was expected with A8-3s. I'm looking forward to the return of the A8-5. One can clearly hear all three ejection charges as they don't seem to happen at exactly the same instant. The parachute deployed perfectly for a gentle return to earth.

A couple of weeks later I launched it with a set of B6-6 motors for another very nice flight.

It's been launched on three other occasions with A8-3s and B6-6s, and has made the NARTREK Silver flight it was built for, so it's all gravy from here. I haven't had an opportunity to launch it with C6-7s yet, but I'm planning to in the near future if the weather will cooperate.

This is a great performing rocket that leaps from the pad with a lot of sound and smoke from three burning motors. It isn't a particularly challenging rocket to build.