(09/10/00) I first heard about Starship Enterprises (now called Fat Cat Rockets as of 1/1/01) from a couple of contributed reviews. I was impressed with the uniqueness of their kits and in the variety of model, advanced and high power. So I am pleased to build their Centaurus. According to Starship Enterprises, "The Centaurus is a hail back to those future ideas from yesteryears." Its futuristic look will certainly catch everyone's attention. In fact, I didn't know it at the time, but I got to see one of these fly at Battle Park '99 in Virginia. The Centaurus is 39.5" tall and its widest body tube is 2.5", however it's width reaches 4" as you will soon see. It is pushed skyward on 29mm motors and returns on parachute. Without a motor it is slated to weigh in at 30 ounces.

The Centaurus consists of the main body tube (standard paper) which is 30" of 2.5" wide with 1/16" wall thickness. The lower main body tube is the same material and 7.5" of 4" diameter tubing. There are also 3 outer pods that are 8.5" or 1" diameter tubing. Centering rings (4), Fins (3), Canards (6), Pod Braces (6), and Pod Struts (3) are all made from 3/16" plywood. There is a lot of wood on this bird. There is a balsa transition to connect between the 2.5" tube and the 4" tube, two launch lugs that once assembled are hidden inside the rocket. The motor mount is 29mm and uses a 22" tube. The recovery system is beefed up with a 15" cable that is attached to a 64" piece of 1/2" black elastic. This is all topped off with a plastic nose cone. Other materials include nose weight, a red 28" rip-stop nylon parachute, pod caps and a series of stickers and decals.

The instructions are printed on both sides of a single 8x11 sheet of paper and consist of 11 steps. There are also 3 additional double-sided pages of diagrams including decal placement and illustrations to help with construction. The number of parts mentioned above may lead you to believe that this is a challenging rocket to build . . . and it is. The instructions don't take any of the challenge away! They are helpful guidance but I found myself building the rocket in the order that I felt was best and barely looking at the printed instructions. The illustrations answered a couple of questions to keep the project moving.

This rocket was "engineered" verses drawn on a piece of paper and built. This is evidenced by the integration of the launch lug inside the lower body tube and by the thru-the-wall, then thru-the-wall fins that then attach to the motor mount. Lastly the alignment of the pods and pod struts that attach just under the upper-most centering ring. Impressive looks and it shows that thought was put into the design of the Centaurus.

The instructions start you off by drawing all the fin lines using a fin guide and cutting out the fin slots. Determining the distance from the bottom of the tubes to cut the fin slots was left up to me. The illustrations showed that the inner tube extended beyond the outer tube some, so I choose 1/2". I then carefully measured the fin and pod braces to determine where the slots had to be in the pods. I went ahead and cut those. Then with the main body tube positioned using the centering rings and transition, I ensured that it extended from the rear by 1/2". I then stood it on a table and brought the test fitted pod with fin to rest up against the side of the lower body tube. I then marked the position. After that I knew the distance from the bottom of the lower body to make the cuts. Take your time and be sure to consider the thickness of the plywood. Always cut on the same side of the line and keep that methodology for the 2.5" tube, the 4" tube and the where the pod struts attach. I found that after cutting all the slots and test fitting the fins that they did not align to make a nice perpendicular fin. I corrected this by making changes only to the inside body tube until the fit was perpendicular. These extra cuts are hidden when assembled. 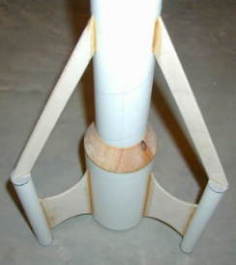 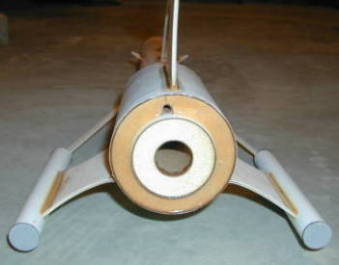 Once all this work is done, it is glue, glue and more glue. The instructions recommend epoxy. Once the lower half is assembled you will need to cut the slots in the upper body tube for the pod struts. Take your time to align these with the main fins. Once this is complete add the six canards and the fin work is complete.

As mentioned nose weight is, in the form of BB's, is provided. This is poured into the nose cone and epoxied into place. This weight makes me nervous so I am going to attach an eye-screw to this nose cone in the same fashion as Missile Works recommends on their Viking 7. 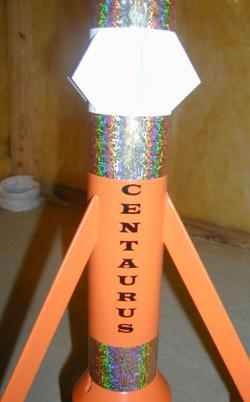 Due to cold weather, I have not been able to finish the Centaurus. The instructions provide a good description for finishing and provides pin strips and some decals. So I will add more information once I can finish and fly this rocket. Stay tuned . . .

Updated 9/00:
Finishing the rocket had its challenges too. All due to the shapes and angles and fins and . . . but she got finished. I used my old favorite, several coats of Plasti-Kote Sandable Primer, to help cover over the imperfections and the shallow tube grooves. Sanding in between each coat. I then choose an orange to paint the entire rocket. After that I used white for the nose cone and the mid-fin section. Finally, I used some holographic designed adhesive sheets around the main body in four places. I also outlined the fins and put one strip at the top of each fin pod. The only decal I used, that came with the kit, was the word "CENTAURUS".

Overall, for CONSTRUCTION I would rate this kit 4 points. The quality of the parts are nice, the engineering is great, the instructions need to be enhanced to help answer some of the questions. 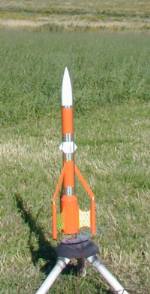 In preparation for flight I prepped the rocket at home by adding motor retention and then pre-taping a G38 BlackMax EconoJet motor. I added a Pratt Nomex® Heat Shield to the shock cord to protect the parachute.

The first flight lifted off on the G38-4 straight up, arced over horizontal and popped the ejection charge. Perfect! The parachute deployed and the rocket fell to be recovered. The white nose cone showed some orange paint where it had hit the body tube.

The second flight was on a AeroTech RMS G64-4. This motor's flame punched the rocket off of the pad (I missed the picture) and thrust it straight and stable as an arrow into the air. Much higher than the G38. It arced over and was heading straight down for about 2 seconds before the ejection occurred (seemed very late). But the 'chute deployed without a zipper and it descended and was recovered. 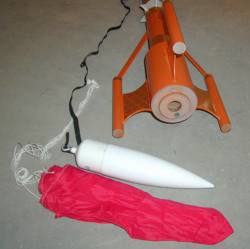 With the 28" parachute and the weight of my finished bird, 38 ounces, I feel that it descends too fast. The second flight hit on one of the fin pods and dented it. I am going to fly it again with my J&P 43" Parachute. 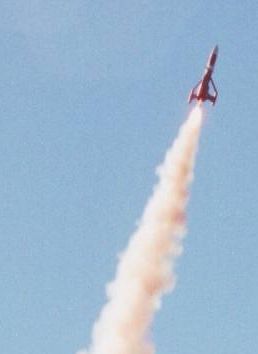 Even though these two flights were successful and I didn't see any "Estes Dents" from the nose cone kicking back off of the elastic, I am concerned about the shockcord mount, length and material type. As mentioned the weight of my finished rocket was 38 ounces of which just the nose cone makes up 16 ounces! That is a fairly heavy object to punch out with an ejection charge and then to have it only attached by 1/2" elastic. (I had already mentioned above that I changed how the eye-screw attached to the nose cone.)

For FLIGHT/RECOVERY, I would rate this kit 4 points.. It will capture peoples attention on the pad and in the air. I think it needs a longer shockcord due to the weight of the nose cone and a larger parachute due to the overall weight of the rocket.

I give the kit an OVERALL rating of 4 points. It will challenge you as a builder, it will certainly challenge you while finishing it, and it will reward you with looks and flight stability that you are looking for. With enhanced instructions, motor retention and some consideration of the parachute/recovery system this rocket would be a perfect rating to go with its perfect and futuristic looks.