Construction:
This rocket is available as a free download from FlisKits and is my first cardstock rocket. I was amazed how easy it went together, not to mention the amount of detail in the instructions.

The rocket "kit" consists of 3 pages of PDF instructions, along with 3 different PDFs of rocket patterns: the yellow/red version, the NARCON 2005 version, and a blank version that you can colorize yourself. I chose the yellow and red since I like bright colors for sighting the rocket during flight. The third sheet of instructions contained the engine mount template and can printed/downloaded separately.

After downloading all the files, I printed off the templates using glossy photo paper and Pigma ink. This makes the colors a little brighter and the Pigma ink doesn't run when it gets wet. I did notice that the printout was missing some of the red markings that were visible on the PDF. I'm not sure what happened on that but I can live with it.

I used an X-Acto knife and a metal straight edge to cut out all of the paper templates. This was the most tedious part of the construction but didn't take long at all.

The body tube is shaped as a triangular tube with a little flap on one edge for gluing. I made the scoring cuts along the back edge of the tube template to take up some of the paper room. This allows for a sharper corner with no white paper showing, like what you would get on an outer surface cut. I actually used my launch rod to hold the paper together while the glue set. I then took notice that I didn't follow the instructions perfectly and forgot to glue in the shock cord in the inside corner. I ended up gluing it about 1/3 of the way down the tube.

Next was the engine mount, which I made out out of 110# cardstock. I found that the tape facing out from the engine mount was a little tricky to handle. I ended up wrapping a non-taped engine tube around the engine and then taping the last part followed by gluing the interior flap together when the exterior dimension was set. Perhaps I missed something but this worked OK. Next, I folded over the end of the engine mount to form a thrust ring. For this I had to cut the outside flap of cardstock then fold it inward on itself. With the thickness of 110#, it was rather difficult to get the fold to work well with the glue. I imagine that the tape method might have been better.

The nosecone is also triangular shaped and went together with no problem. The shoulder was exactly correct for fit into the body and the nosecone area. Clay weight and the Kevlar® shock cord were glued into the nosecone per the instructions.

The fins are also a triangular tube. I was able to glue them together without any problem. I then attached the fins to the body tube one body tube angle at a time using a double glue joint.

Finishing the fins, I used Jim Flis's suggestion of placing toothpicks on the outer corners of the fin triangle. I think that it gives the rocket a little snazziness to boot.

Lastly, I made a streamer for recovery and CA'd it to the Kevlar® near the nosecone.

Finishing:
This rocket requires no finishing since the printout takes care of all colorization/finish work. However, if you make cuts on the outside of the creases, using an appropriately colored pencil can eliminate the white lines along those cuts. 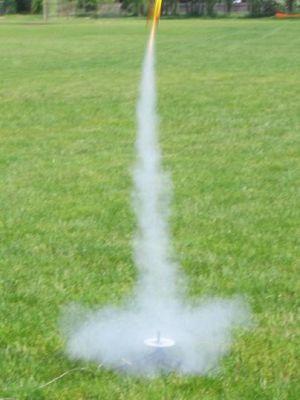 Flight:
This little rocket will just blast off from the pad! When taking pictures of launches, I usually get the initial smoke, but the rocket hasn't picked up speed yet. For the Nebula, it was almost out of the frame before I got the picture!

All flights were on Estes A10-3T engines. The first two flights of my Nebula were on a clear day with 5-10 mph wind gusts. The maiden flight was pretty distracting, since I was running the camera. Coming off the rod it seemed very stable, but by the time I started looking for the little bugger, it was on the ground ejecting its engine! Hmmm, I think it's unstable, but I didn't get a good look.

The rocket was undamaged so I reloaded and prepped it for another flight. This time with no camera in hand, I watch the Nebula take off straight up for about 30ft then it went into 2 loops, ejects the engine and the streamer at about 20ft from the ground, and does a falling leaf recovery to the ground. It was a rather amusing display, but I think if it goes up again, I'll have to add nose weight.

So on an overcast day with 10-15mph gusting winds, we are off to a different launch area with the newly weighted Nebula (a 1/2" nut glued into the nosecone). I prepped and set up the rocket for launch. This time, it went straight up! I guess it got about 400ft off the ground. Good flight and no damage. 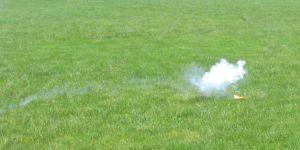 Recovery:
Ejection on the third flight (but first stable flight) occurred before apogee, which isn't surprising considering the speed that the rocket travelled. The streamer recovery brings it back quickly, so even in 10-15mph winds it landed 30 yards from the launch pad.

Summary:
This rocket is definitely worth your time to make. It has got some incredibly easy construction areas and once weighted right, it flies like a champ. I'm going to have to print off the NARCON version just to have another one to play with.