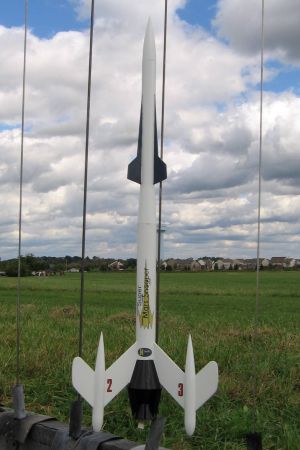 Brief:
Upscale of the Estes classic Mars Snooper sized to fly on 24mm motors and packed with great quality components. Thru-the-wall fins and thick wall tubing make this a rugged beauty that could certainly handle the move up to 29mm if you're daring. It even flies as great as it looks!

Construction:
After paying a little over $60 for this (including shipping), I was a little disappointed when the surprisingly small bag arrived a couple days later. I decided to relegate it to my build pile to age for a few months. I recently pulled it out though, and when I opened the bag to get started, I realized that this kit is well worth the money--the parts practically exploded out of the bag. There were tubes within tubes, cones stashed all over the place, and very nice laser-cut fins. All told, there were 7 balsa cones, a balsa transition, heavy wall tubes, and an assortment of other parts. I should have jumped on this one right away... 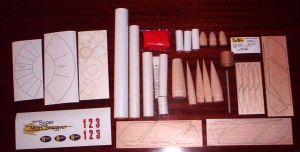 [Note: The parts list included an indexed photo of the parts layout, which is a nice touch.]

This is listed as a skill level 4 kit. I would agree with that assessment. This definitely requires above average building skills.

The instructions are just over 20 generally well written half-pages, however, the illustrations look like light copies of hand drawings. I would rate the instruction quality just a little below average.

Construction begins with the motor tube. You must first mark the lines where the centering rings go. Do this very carefully, as the spacing is critical for proper alignment with the through-the-wall fins. When bonding the centering rings, watch out for the first mistake I made: the first ring you bond is actually ring #2, going on the second line. You then glue a coupler to it and the second ring, which lines up roughly to the first line, anchors the back of the coupler. The rings do not fit inside the coupler as you might expect but attach to the outside edges instead. The other little adventure I had with the centering rings is that there are three different sizes, although they are described in the instructions as "small", "large", and "large". Personally, I think this would have been a lot easier if the smaller of the larges had been described as "medium" (or dub the largest large as 'grande'). The photo of the motor mount shown used the wrong "large", and I wound up having to swap it out later. For the record, the largest ring goes on the aft end of the coupler and the medium ring (with motor hook notch) is saved/used for later. The rest of the assembly is fairly straightforward with two more centering rings bonded and the Kevlar® looped and anchored around the forward ring.

There is also a Semroc 29/24 adapter kit included with this. At first I thought this was so I could switch from 29 to 24mm motors, but it's actually to be bonded inside the 29mm motor tube. I'm not sure I get this though as I think friction fitting this would be a bit risky and there's no very good way to make positive motor retention work on the 24mm adaptor with the tail shroud in place. I'm not sure why they didn't just go with a 24mm tube and eliminate the 29mm tube altogether...

The pod assemblies are pretty simple: glue a nose cone in one end of the tube and a tail cone in the other. The fit was snug and virtually no seam between the cones and the tubes. 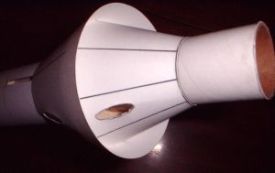 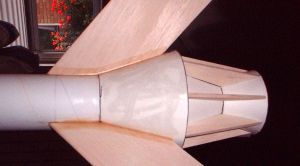 There are a total of 3 cardstock shrouds used on this build. I'm pretty anal retentive on shrouds and went to great effort to hide the seam. Rather than go the glue tab/overlap route, I chose to cut off the tab, glue it to the backside of the edge (with white glue!) and then glue the other edge to the exposed tab. After everything dried, I coated it with thin CA, sanded everything down, then filled in the seam with a little microfiller. Perfect. Not worth the effort though, as the shrouds are cleverly designed so that the seams serve as fin bonding lines, so they are almost completely covered anyway. 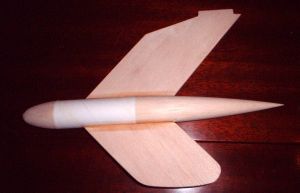 Next up I attached the fins to the pod tubes using a wraparound guide to mark the lines. It's a bit of a pain, but you have to sand a taper to the root edge of the fins in order to fit to the taper of the nose and tail cones. As precisely as everything else seemed to line up on this kit, I was a little surprised the laser pattern didn't at least make an effort to come close. After about 20 minutes of fiddling to get the fit about right, I applied a little wood filler and three generous fillets to each joint.

The lower body tube is not pre-slotted, so I got to do that on my own. I carefully marked the tube for the slot locations and cut them out accordingly. Once you start trying to align all the components, you'll find that either the centering ring location dimensions or the fin slots are off by about 1/8", and when you insert the motor tube, the centering rings don't quite make it to the top of the fin slots. I wound up having to extend my fin slots a bit and patching up the exposed slot on the other side.

As the shrouds are glued in place, orientation and sequencing is very important. Orientation because the launch lugs goes through the shrouds (and a hole in the large centering ring plus a notch in the medium ring), and sequence because the forward shroud covers the rear shroud, which is slightly oversized and needs to be trimmed for fit.

The upper body assembly is a simple one--the fins are 2-piece bonded on a flat surface then attached to the tube (using a wraparound guide). The transition is glued in place. Do not glue the forward cone in place until you've finished the rocket and checked the CG. While there is no nose weight included in the kit, you might need some depending on your motor selection and a removable nose cone makes it easy to add/remove weight. Just make sure it's a very tight fit.

Once the upper and lower body assemblies are done, it's time for the tail. This is accomplished by sliding the third (smallest) shroud in place then gluing 6 ribs/fins that fit extremely well onto the two rearmost shrouds.

Finishing:
With all the balsa on this, plus a couple feet of tubing, there was plenty to fill in terms of grain and spirals. Two applications of diluted wood paste and about 6 hours of work later, I had a rocket ready to accept a nice paint job. I went with two light coats of Krylon primer followed by a base coat of white gloss. I topped it off with Rustoleum white gloss, which tends to produce a better gloss for me than the Krylon although it goes on a little bit thick and takes much longer to dry. After allowing a couple of days to cure, I masked off the fins and lower body area to paint the shroud area gloss black.

The instructions call for masking off a tapered area on the upper body and painting a dark blue. I looked at the cover art and really wasn't sure I could make that look anything other than weird or ugly, so I decided to just mask and paint the fins blue.

The waterslide decals to finish off the job are excellent quality. However, be careful when applying them though, as they have a strong bite and don't really want to move around once they touch paint.

Flight:
One thing you will need to consider before flying this is the amount of nose weight needed based upon your motor. The kit comes without any weight whatsoever, but notes that you might need to add accordingly to bring your CG 25.25" aft of the nose with the heaviest motor you intend to fly. Considering my empty weight was 8 ounces, versus the manufacturer spec of 9oz, I figured I'd better check into this a bit more carefully.

Launch day was pretty breezy with winds steady at 10mph and gusting to 12-13mph. I had intended to start out with an E9-4, but the prospect of tracking a 30" chute in those winds made me wimp out and start with a D12-3. It weathercocked a good bit, arced over, and deployed right at apogee. The altitude was a bit wimpy, maybe 200-250 feet, and the 30" chute was actually about right as it came down a bit hard.

I was a bit worried about how well the pods/fins would hold up to hard landings, but this one fared well and the rocket suffered no damage (it landed on hard grass).

Given the short walk, I loaded her up again with an E9-4 and took out two of the 4 washers. It was a much better flight--I could see it trying to weathercock a bit, but the nose held straight up. Another perfect deployment and this time I got plenty of drift--about 500 yards, landing within 50 feet of the end of the park and a major road.

Not one to press my luck, I put this beauty back in the box for another day.

Recovery:
Temporary/adjustable nose weight is an excellent idea for this kit, allowing me to "tune" the rocket for the flight conditions. The chute is also a beauty.

The only con I could offer up on flight/recovery is a longing for 29mm option along with the 24mm adaptor.

Summary:
This is an excellent kit, great looking rocket, and top quality materials. It was a pleasure building and flying it, and I look forward to many more flights.

On the con side, the illustrations were a little weak compared to some of the other larger players (FlisKits and Semroc) but were adequate for a small vendor trying to make a little money off his hobby.