The Loc/Precision EZI-65 kit is the rocket which is supposed to get me my Tripoli level 2 certification. This is a high-performance rocket which is reasonably stable and should give outstanding flights on I and J motors. (Of course, as is typical for me, I've done things backwards and have already built several larger rockets.)

The rec.models.rockets community seemed to favor the Loc/Precision EZI-65 as the ideal level 1 certification rocket. However, I'd already purchased the I-ROC and since it has a 38mm motor mount, it seemed more appropriate for level 1 (H and I motors). The EZI-65 flies on I and J motors (it has a 54mm motor mount), which is just up into the level 2 range.

The color scheme Loc/Precision chose is hideous, so I decided to go wild on this rocket and do it as modern art. I also had just found a new kind of Krylon paint: Brass metallic, which I wanted to try. If it isn't obvious, imagine an abstract painting (such as a Mondrian, a Dutch geometric painter) with the fins and nose as the picture frame. (OK, so it is a bit of a stretch.)

I shredded the original rocket attempting my level 2 certification, but a rebirth was completed as a Rocketry OnlineHow-To Classroom forum series, which has also been turned into a Tech. Series article so I have removed the detailed information from this page. Join us and build a super-strong rocket and certify in style with advanced high-power construction techniques and recovery electronics!

On the left is the original EZI-65, built as per the kit instructions. On the right is the "level 2" version: fiberglassed, with dual-deployment and a better copy of a Mondrian painting.

On its maiden flight, the EZI-65 shredded spectacularly. It appeared to disintegrate about 100 feet off the ground. We never figured out why it shredded--perhaps a fin came off. The tail of the rocket was never recovered, although we did find the undamaged nose later.

The rebuilt EZI (now the EZI-130) flew for the first time at ROC-stock in Lucerne Valley, CA on November 15th. The spectacular flight on a J800 will not be the last!

The flight was dramatic, with a total altitude of 6322 feet (as measured by the Missile Works RRC2). The parachute never fully came out of the payload section (as you can see in the picture below), but the strong construction of the rocket saved it as it came down, braked by the three sections of its dual deployment. Next flight will be with a smaller parachute which will fit more easily into the payload section. Too bad there's not enough room for a piston.

The instructions for this kit were standard Loc/Precision: just enough information on the back of the kit card.
The color scheme they chose is hideous, so I decided to go wild on this rocket and do it as modern art as you can see. The Krylon Brass metallic paint is pretty neat, but requires ultra careful preparation as it shows defects even more than white. Also, my paint job came out much flatter looking (even with a Crystal Clear coat) than the cap on the can. 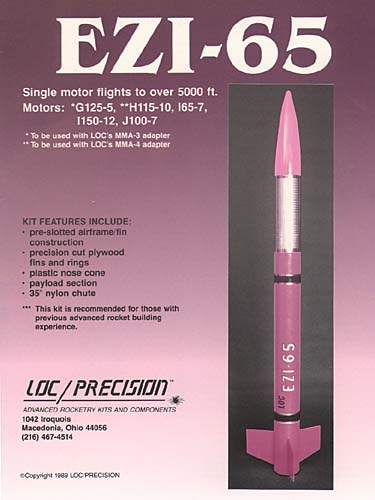 The EZI-65 kit isn't really strong enough for level-2 motors if built stock. See my Rocketry Online Tech. Series article for a detailed description of building it for level-2 certification. 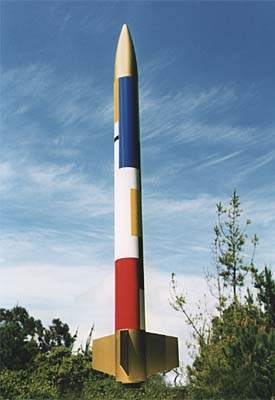 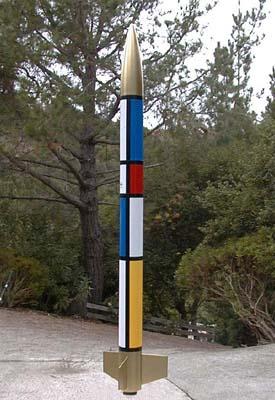 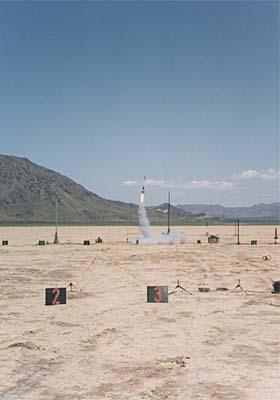 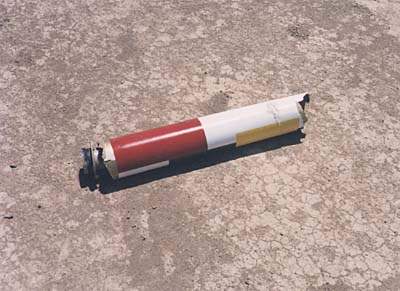 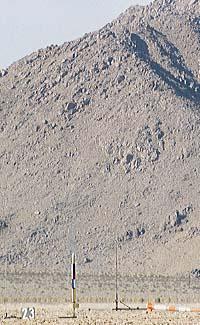 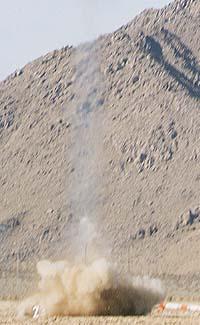 This is the ideal level 1 cert kit. If you expect to use it with bigger motors and don't want to glass it, one thing you can do is trim down the fins just a bit so they are closer to LOC/Onyx fins in terms of shape. This reduces the risk of fin flutter which is what causes most of the shreds when flying this bird on high-thrust motors. Another thing you should do is slot the tube to the bottom so you can build the fin can outside the rocket, and then slide the entire assembly in. This will let you create a very strong fin can assembly. Finally, don't forget positive motor retention [Kaplow klips]. I've modified mine to use the zipperless technique [see Rocketry Online InfoCenral]. I've flown mine on an H180, H220 and I357 without any problems.

I have been a LOC fan for a very long time, Ron & Deb have treated me very well, and now Barry continues the great customer service! I purchased my EZI-65 kit recently to be built specifically for flights with Hybrid motors in hilly/tree terrain. I launch from my house and have alot of room, but the hills and trees won't leave! I made the following changes when ordering my kit: 3rd centering ring, long MMT, longer Payload for Dual deploy, E-bay, two 9/16" x 20' tube Ny cords, 12"x12" Kevlar® wadders w heat-sok on first 6 in, 18" drogue, 50" main, custom made longer fins with nicer delta in "Fin can", pull wire conduit, drogue deploy conduit, 3/8" alum fuel line at 11" up for liquid NOS venting, dual alts with a pocket for Walston retrieval (to find in my trees). Launched on HyperTek I205 first for 1800ft, then J115 for 3800ft. Deployments have been perfect so far! See a launch with a JFX/I225 fuel grain for a demonstration at an airshow (A HREF=?http://www.case-enterprises.com/download/photos/jt-ezi-65-mod.mpg? TARGET=?_new?>here. I would recommend buying from LOC if you are fairly comfortable building rockets, the directions are clear, but expect a certain amount of knowledge from the get go. I'll give it 4.75 of 5 (since I ordered it the way I wanted!)