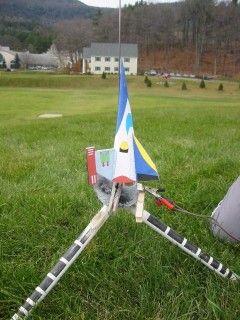 Brief:
This is the CD version of the Model Minutes Space Racer paper rocket. The "kit" arrives on a CD with motor hook (0.76 mm piano wire) and cellophane to make one pair of 3D glasses. The rocket has a cool rear ejection system with a parachute, which must be supplied by the builder. If constructed properly, there should be no need for wadding.

Construction:
Because this version of the Space Racer is on CD, the builder needs to provide the following:

Upon receiving the CD, I put it in the computer. I expected to see files in PDF format. I was surprised that both JPG and PDF files were accessible through a web browser. On my wife's PC, the CD is pretty straightforward, immediately opening a web browser, allowing you to access the files quickly. On my Mac, the CD is just a hodge podge of files containing JPGs, HTML documents, and PDF files. I finally was able to select one HTML file from my Mac that allowed me to browse all the information on the disc. 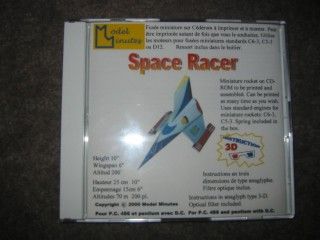 I decided to use the PC to access the CD info. First, you get to choose your language of preference: French or English. I selected English. In order to build this rocket, I had to first print the instructions on regular paper (5 pages) as well as the designs on card stock. The web browser indicates a regular size and an A4 size. I printed up both. You also get an option to print either the color version or a "black and white" (almost all white, except for the lines) version of the design. I selected color.

The directions are printed with 3D images. I had already worked on a few Model Minutes rockets before and decided to just go ahead and print the instructions on my B/W laser printer, foregoing the construction and use of the 3D glasses. The instructions give guidelines for rolling tubes and forming cones for the rocket, as well as general information on the construction of the rocket. There is also information on how to swing test a rocket and how to build a cheap launch pad.

The first step to building the Space Racer is to cut out all the parts of the rocket: 1 fuselage, one motor mount, 3 fins, and 2 centering ring templates.

Then I was instructed to roll and glue the cone body of the rocket. This went together pretty easily considering the long shape of the cone. The motor mount is simple to construct. The CD comes with a motor hook which is an unusual shape. This fits onto the motor mount and tied down with string. Then the motor mount is fit with centering rings.

Next, I followed the instructions for shaping the fins. One good tip I suggest is to use an old, empty ball point pen to run along the fold lines of the fins. This does not crease or tear the paper, and allows you to fold parts accurately and quickly. The fins went together quickly and looked great. On the fuselage/cone, there are guides for attaching the fins. This went together nicely. I used wood glue for all the gluing.

Last but not least, I cut out the shock cord attachment, tied the shock cord to it, and glued it deep inside the nose of the rocket. The shock cord anchor is a little weird. I have never seen anything like this, and unfortunately the instructions were not clear on how to precisely tie the shock cord on to the anchor.

Once the rocket is together, I added nose weight (clay and wood glue), and placed the motor mount in the back of the rocket with an old left over Quest parachute I had in my spare parts box. After a swing test, I ended up adding a little more nose weight. I was finally ready to launch.

PROs: With the CD, one could print up endless copies and versions of the rocket including upscales and downscales. With a JPG, the files could be loaded into an editor like Photoshop or Illustrator to allow changes or additions of colors, for instance. I think an MMX version of this rocket would be great. This would be easy to do, just tell the printer to print a reduction of the the original size.

CONs: The directions are not clear about the shock cord mount and the method of attaching the shock cord to the anchor. Also, the CD instructions indicate that the launch lug is actually part of one of the fins attached to the rocket. I was supposed to drill/cut a small hole at the top and bottom of the fin to fit the launch rod. My card stock was probably not the required 110 lbs. (I was cheap and bought subpar paper from Michael's a few months ago and now am looking for projects to use up all the paper. You get what you pay for...) Instead I opted to put a traditional launch lug on the seam of the body of the rocket. I just didn't trust the fin to be a sturdy launch lug.

One last CON is the actual printed sheets of the rocket. I printed both the regular version and the A4 version. Just be careful when printing that you do not select any type of image reduction. When I was putting my kit together, I realized that I had one version of the Space Racer and one slightly smaller version of the Space Racer. I built the smaller version. All parts fit and it was no problem except that when I was rolling the motor mount around an expended engine, the motor mount was not wide enough to completely house the circumference of the motor casing. I had to add some scrap paper to the motor mount so that it completely covered the expended engine. This was not a big deal, but did require an extra step on my part. 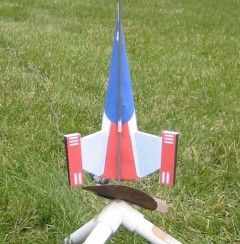 Finishing:
Since my version of the Space Racer was already printed in color, it was ready to go.

The instructions do say to apply Mod Podge to the paper if you are looking to strengthen the rocket. I would recommend spraying the rocket with a clear finish first to prevent the ink from running on the rocket, particularly if you are using an ink jet printer, then apply the Mod Podge.

It is a fairly easy rocket to build, and if one has previous Model Minutes experience, it is not difficult to make sense of the instructions. If some of the directions could be made clearer (particularly the shock cord mount, printing size, and lower landing strut--I'm still not sure what this was supposed to be), this would be an even greater kit. Also, I am not sure the shock cord mount is very strong. 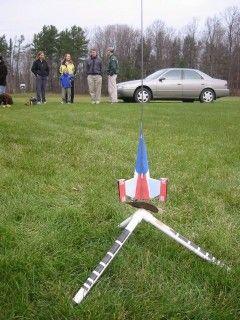 Recovery:
This rocket was extremely stable, great ascent, and the rear ejection system worked like a charm. The only thing I would recommend for the kit is an inner ring of paper that can sit inside the lower part of the cone/body to prevent the kind of tearing I had in my rocket.

Summary:
The nose of this rocket is delicate and with all the nose weight, it might end up landing rather hard on it. Fortunately, the rocket is made out of cheap materials. Once the motor mount and parachute are made, I am sure that just building the fuselage and fins could be accomplished in less than an hour.

This was a fun build. I like the looks of the rocket and it flew surprisingly well. I will most likely build another, even if it is a downscale.