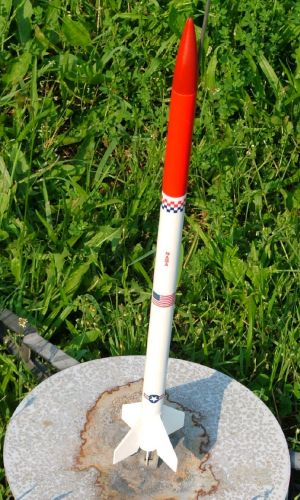 Brief:
This is an OOP rocket from MPC who was selling model rockets back in the 1960s and 70s. I won it on eBay for under $13.00 with shipping. I saw there were some reviews of the MPC kits and thought it would be interesting to some to see this model reviewed! I was launching rockets back then but never know there was a company other than Estes and Centuri selling them till I saw them on eBay. This is a single stage rocket using a 12" plastic parachute for recovery.

Construction:
There were four pages of assembly instructions with illustrations and a parts list with pictures. The body tube is the same diameter as a BT-20 and is in two lengths. The longest tube is about 12 3/4" and the smaller one, which is used as a payload section, is 4". The nose cone is plastic and there is a four fin plastic unit. There is a thin metal hook for engine retention. The shock cord attachment method was rather bad so I used the old Estes 3 fold paper in the tube way of doing it. The kit's method was using a strip of cardboard to tie the cord to then gluing in the tube. There was no way I could see that the parachute would eject without ripping by doing it the way in the instructions!

The method of the engine mount was different than I have seen. There is a small length of heavy cardboard tube 1.175" in length that is glued in to the top of the plastic fin unit with a small section sticking out to be glued to the longer of the two body tubes. You install a motor block and the metal hook here. What I found strange was that the engine sticks out of the fin unit over 1/2". This is standard assembly but for one real big "gotcha": you must glue a plastic coupler into the 4" length of body tube, which also happens to be where you tie the parachute and shock cord. Well they just say glue it in but don't tell you or show that it has to stick out half way to mate to the lower tube. Fortunately, I pulled it out before the glued dried! I wonder how many young rocketeers messed up this step back then? As I said before, the method of shock cord attachment was not the best. If you ever build one of these, use the Estes way and it will work better! The included shock cord is round. I used some new 1/8" cord I had since the round was too thick for the small body tube and was in bad shape because of age. It took me one night to build the kit. I think it could have been done better back then. The PROs are quick assembly and the parts were OK.

Finishing:
With plastic fins and nose cone, the prep work was fast. I painted the payload section red and the main body tube white. I used my standby paint, Rustoleum enamel I get at Home Depot. The kit included full color waterslide decals. I scanned the decals, got some inkjet decal paper, and made my own since the decals had very fine cracks from age. With the decals, it made for a rather sharp looking rocket! No CONs in the finishing dept. 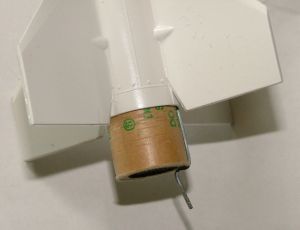 Flight:
I used some Estes recover wadding and used a 1/2A6-2 for the first flight. The engines listed were a MPC number that don't exist anymore! The first flight was not very high, but the rocket went up straight and the chute came out fine with a good recovery next to the pad. I then used an Estes A8-3. This flight pushed it much higher and again recovery was fine. There was no wind, so the last launch with this rocket was with a C6-5. This engine shot it way up there! Just a speck up in the hazy sky. None of us saw where the parachute opened up--in fact we all lost it in the sky. We looked and looked and did not find it. Well, not at the time we launched it anyway. When a friend's rocket came down over a small hill by the farm we sometimes launch at, he found the rocket in a low branch on one of the few trees there! We got it down and the rocket was in fine shape although the parachute was shot! All the flights were fine even though I was wondering with the way the engine was out of the body tube if it would mess up the flight path. I would have to say there were no CONs to the flights I had with it though I would never use anything bigger than a B in it!

Summary:
It was fun building a kit I never even knew about when I was a kid the first time around building and flying model rockets. The kit could have had a little better instructions but I did have some fun with it. Back then it would have been nice to know about MPC rockets but I always ordered my rocketry items mail order from the big two. I never went in a hobby shop to look at kits... I was happy my dad would pay for a small $10.00 order once in a while back then! $10.00 sure got you lots of rocketry stuff in the 1960s and early 70s!